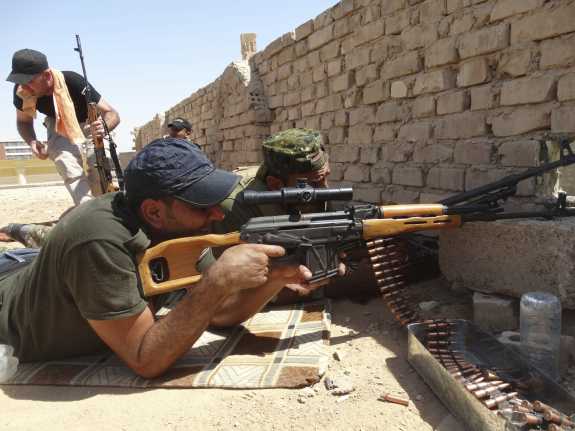 Members of Iraqi security forces are seen during a fight with Islamic State militants Sunday on the outskirts of the city of Ramadi.

The United States has begun its first-ever airstrikes in direct support of Iraqi ground forces, in the opening move of what could be a protracted fight against so-called Islamic State militants in the region.

“This is something new,” Tom says. “For the first time, U.S. airstrikes have been in support of Iraqi forces.”

The U.S. has also sent 475 military trainers to Iraq, Tom says. “They will join a few hundred trainers already there,” he explains.

“They will be setting up in centers in Irbil and Baghdad,” he adds. “Also, the U.S. will be setting up a military headquarters in Iraq headed by a two-star general with dozens of staff members. And they’ll oversee this expanded effort in Iraq – the airstrikes and also, the help from other countries help. “Is that enough to spread around Iraq.”

Meanwhile, The Associated Press quotes activists as saying that “thousands of residents in the Syrian northeastern city of Raqqa have fled to nearby villages in anticipation of possible U.S. airstrikes against militants in the group Islamic State.”