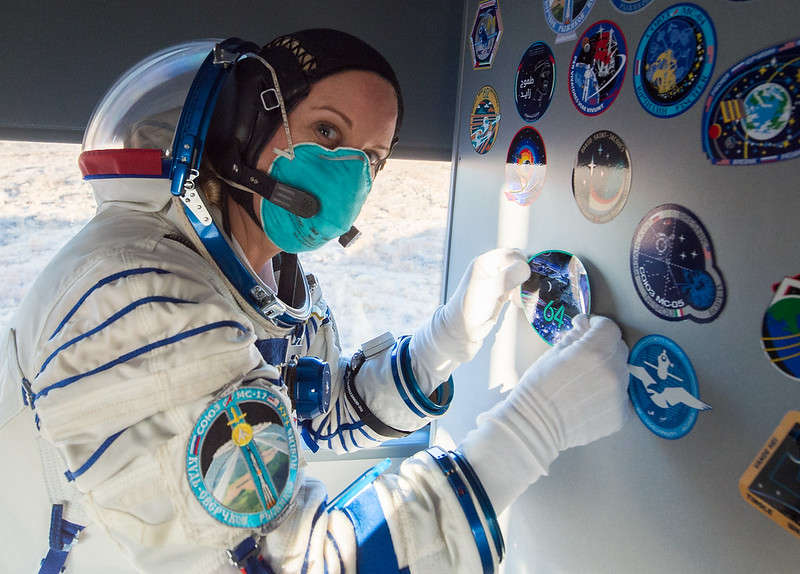 Expedition 64 NASA astronaut Kate Rubins affixes an Expedition 64 sticker inside the bus carrying her and fellow crewmates Russian cosmonauts Sergey Kud-Sverchkov and Sergey Ryzhikov of Roscosmos to the launch pad, Wednesday, Oct. 14, 2020, at the Baikonur Cosmodrome in Kazakhstan. The trio launched at 1:45 a.m. EDT to begin a six-month mission aboard the International Space Station. Photo: (NASA/GCTC/Andrey Shelepin)

A NASA astronaut and two Russian cosmonauts arrived at the International Space Station after blasting off from Kazakhstan Wednesday morning. The crew of three, including NASA’s Kate Rubins, launched on a Russian Soyuz capsule.

It’s Rubins second stay on the space station. On a previous mission in 2016, she became the first person to sequence DNA in space.

The space station crew expanded to six people today when the Soyuz crew ship hatch opened at 7:07am ET just a few hours after the Exp 64 crew launched from Kazakhstan. More… https://t.co/9L5DaJFRSa pic.twitter.com/skxgdiKKJH

The launch marked the last scheduled Russian flight carrying a U.S. astronaut. NASA is now working with commercial companies SpaceX and Boeing to ferry astronauts to the station, launching from the U.S.

SpaceX is set to launch another crew of four next month, three U.S. astronauts and one Japanese astronaut, from Kennedy Space Center in Florida.