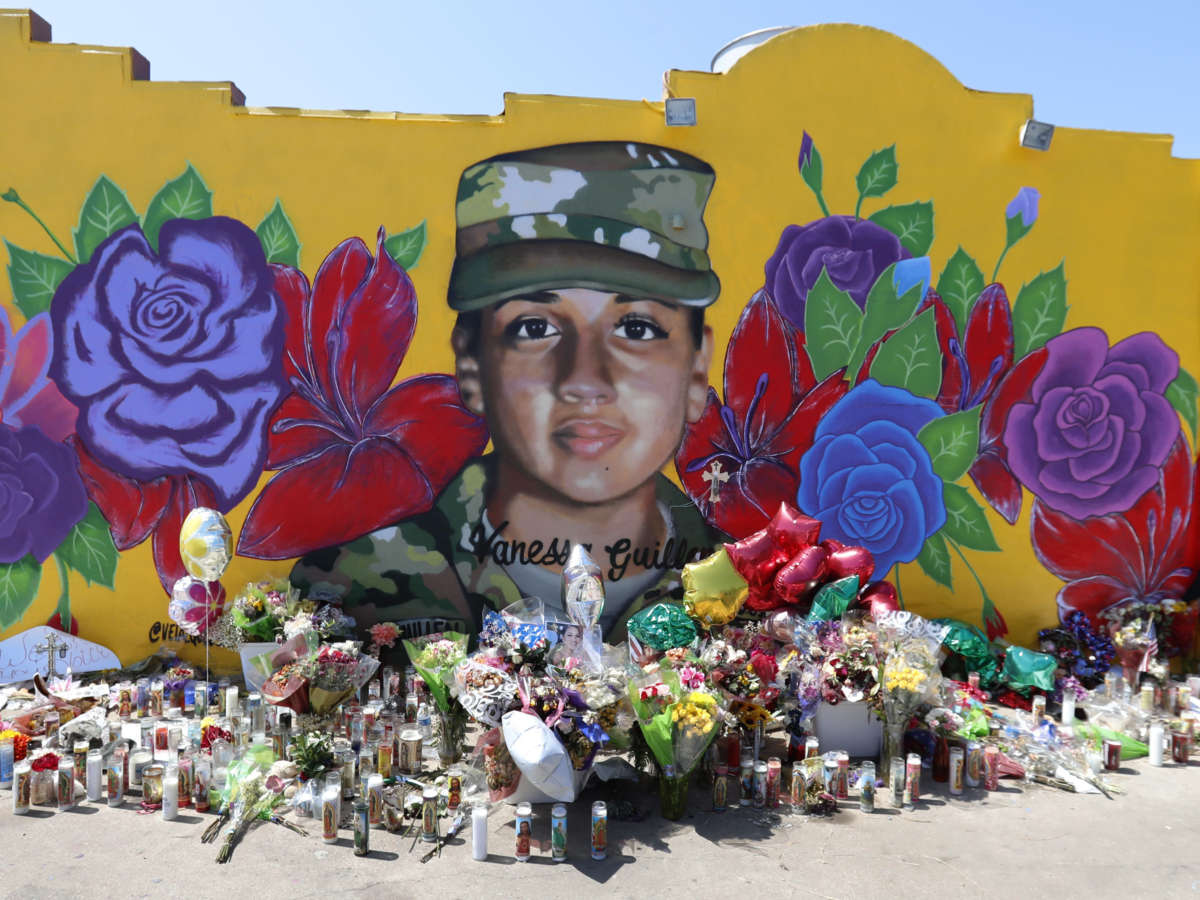 A mural of slain Army Spc. Vanessa Guillén in the south side of Fort Worth, Texas. The Army says it will expand its inquiry into the killing of Guillén, who is one of a string of disappearances and deaths at the Texas post.
Image credit: LM Otero

The Army has removed Maj. Gen. Scott Efflandt from his post as Fort Hood’s senior commander, a week after another soldier from the base was found dead. The Army also says it will expand its inquiry into the killing of Spc. Vanessa Guillén, who is one of a string of disappearances and deaths at the Texas post.

The change in command at Fort Hood had been previously scheduled, the Army says. But it adds that Efflandt will not go on to command the 1st Armored Division and Fort Bliss as the service had planned. Instead, the Army says he will remain at Fort Hood, which will be commanded by Maj. Gen. John B. Richardson IV.

The most recent reported fatality from Fort Hood was Sgt. Elder Fernandes, who had been missing for about a week when his remains were found last week in Temple, roughly 30 miles from the base. Attorney Natalie Khawam, who is working with Guillén’s and Fernandes’ families, said last week that Fernandes’ body was found hanging in a tree near railroad tracks. Police said there was no indication of foul play.

At least nine people stationed at the massive military base in Killeen have been found dead under unusual or suspicious circumstances this year.

“This year at Fort Hood, there have been about 28 soldiers total who have died at the installation, which isn’t abnormal for other years. However, the manner in which they’ve died is what’s drawing attention,” reporter Rose Thayer of Stars and Stripes recently told NPR.

Both Guillén and Fernandes had said they were sexually assaulted or harassed at Fort Hood. Fernandes formally reported abuse; Guillén’s family says she told them she was being harassed before she disappeared.

The Texas Senate Hispanic Caucus is calling for a congressional investigation into the post, noting that “more than one-third of women at Fort Hood said they were sexually harassed” in an Army review earlier this summer.

As it announced the move to replace Efflandt, the Army also appointed Gen. John Murray, commanding general of Army Futures Command, to lead “an in-depth investigation” into actions and decisions related to Guillén, going up the chain of command.

Multiple official reviews or inquiries into Fort Hood are underway. Murray will roll those efforts into one higher-profile investigation, the Army says.

His work will remain separate from an independent review of Fort Hood that began in August, the Army says.