U.S. And Cuba Will Hold Second Round Of Normalization Talks In Washington 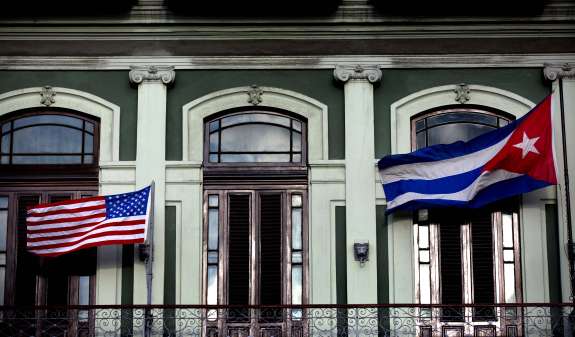 A Cuban and U.S. flag wave from the balcony of the Hotel Saratoga where a U.S. Congressional delegation is staying in Havana, Cuba, on Monday.
Image credit: Ramon Espinosa

The United States and Cuba will hold a second round of talks aimed at normalizing diplomatic relations in Washington, next week.

State Department spokeswoman Jen Psaki made the announcement during her daily press conference on Tuesday.

“The sides held historic negotiations in Havana last month and the next round is seen by U.S. officials as critical to fleshing out details on re-establishing ties.

“In particular, the United States wants to reopen the U.S. embassy in Havana before Cuba is officially removed from the U.S. list of state sponsors of terrorism. It also wants travel restrictions on U.S. diplomatic staff in Cuba lifted.

“Cuba made clear in last month’s talks that it first wants to be removed from the terrorism list and wants Washington to halt support for Cuban political dissidents, a step the United States has firmly rejected.”

The Associated Press caught up with Senators Mark Warner of Virginia, Claire McCaskill of Missouri and Amy Klobuchar of Minnesota, who were in Havana over the weekend. Klobuchar has introduced a bill in Congress that would lift the U.S. embargo on the island.

The AP reports the senators said they were looking at next week’s meetings with hope and expectations.

“He did not say if he expected the pending issues to all be resolved in the coming round of talks but told a large group of reporters, most from Cuban state media, that diplomats often moved more slowly than politicians want. The next three to six months are a key window for progress in the normalization of ties between Cuba and the U.S., he said.

“‘Frankly I’m optimistic because the negotiators are two women and we know how to get things done,’ McCaskill said.”