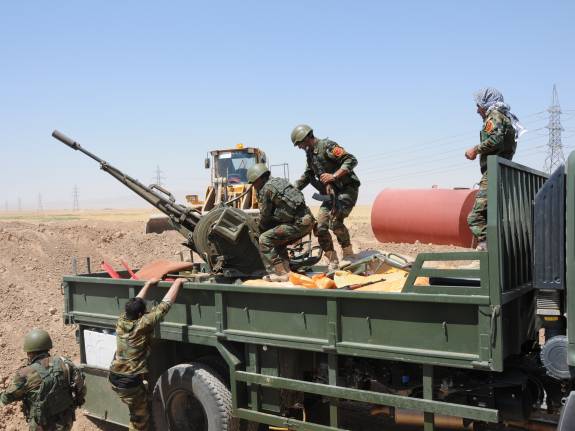 The drop was the second in as many days and was part of a broader operation that has included airstrikes against the militant fighters from the group known as the Islamic State, which is threatening the Kurdish city of Irbil.

A statement from the Pentagon says one C-17 and two C-130 cargo aircraft dropped 72 bundles of supplies for the refugees, including more than 28,000 meals and more than 1,500 gallons of water.

“To date, in coordination with the government of Iraq, U.S. military aircraft have delivered 36,224 meals and 6,822 gallons of fresh drinking water, providing much-needed aid to Iraqis who urgently require emergency assistance, the release said.”

“Yesterday, U.S. forces launched two rounds of airstrikes against militant forces. Two F/A-18 jets dropped 500-pound bombs on a piece of artillery and the truck towing it. The Pentagon says the militants were using the artillery to shell Kurdish forces defending Irbil, the capital of Iraq’s autonomous Kurdish region, and home to a U.S. consulate and about three dozen U.S. military trainers.”

“The lightning-quick advance of the Islamic State militant group, south from the northern city of Mosul to within 60 miles of Baghdad, has been a source of deep concern since it began two months ago. But the administration worried that interjecting itself into the conflict would inevitably open it to charges of siding with one side or the other in what has become an increasingly sectarian battle.

With many Sunni Muslims seeing the Sunni militants as a better alternative than Shiite Prime Minister Nouri al-Maliki, the [Obama] administration hoped to use the promise of additional military aid as leverage in promoting a new, more inclusive Iraqi government.”

President Obama announced on Thursday that he’d authorized the airstrikes and the humanitarian drops.