U.N. Peacekeepers Rescued After Being Trapped By Syrian Militants 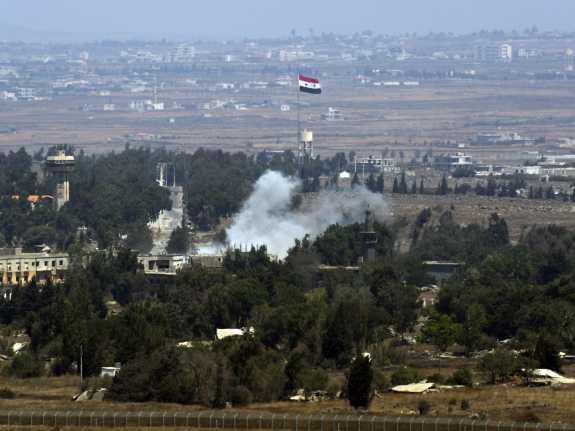 Smoke rises near a Syrian flag hoisted up a flagpole as a result of the fighting between Syrian rebels and the Syrian Army over the control of Quneitra crossing, on Saturday. The area is where dozens of U.N. peacekeepers had been under siege by Nusra Front fighters.
Image credit: Atef Safadi

Dozens of besieged United Nations peacekeepers were safely extracted after being surrounded for days on the Syrian side of the Golan Heights.

After rebels of the al-Qaida-affiliated Nusra Front seized 44 Fijian peacekeepers on Thursday, they laid siege to two encampments of Filipino peacekeepers totaling more than 70 soldiers.

The rebels demanded the Filipino soldiers, part of the U.N. mission known as UNDOF, surrender their weapons, but the peacekeepers refused.

“There was a firefight but I would like to assure everyone that our troops are safe at the moment,” said Ramon Zagala, chief of the Philippines Armed Forces public affairs office. He did not give any more details.

“The U.N. peacekeepers returned fire and prevented the attackers from entering the position,” a U.N. statement said. It said there were no reported casualties among the U.N. personnel.

It wasn’t immediately clear which U.N. peacekeepers were involved in the firefight with Nusra Front fighters.

The Associated Press reports: “The gunbattle began early Saturday at the Rwihana base some 1.5 miles (2.3 kilometers) from Quneitra, where 40 Filipino peacekeepers were surrounded by Nusra fighters who were ordering them to surrender, said Rami Abdurrahman of the Britain-based Syrian Observatory for Human Rights. The Philippines’ Defense Secretary Voltaire Gazmin gave a similar account but did not name the armed group.”

The Canadian Broadcasting Corp. quotes an unnamed military official as saying that an Irish U.N. peacekeeping battalion, which is tasked with emergency responses, evacuated all the Filipino peacekeepers on Saturday morning.

The U.N. said in a statement that that the Fijian peacekeepers are, according to reliable sources, “safe and in good health.”

UNDOF, with peacekeepers from Fiji, India, Ireland, Nepal, Netherlands and the Philippines, has monitored the disengagement zone between Israel and Syria since 1974 in the wake of the 1973 Arab-Israeli war, Reuters says.