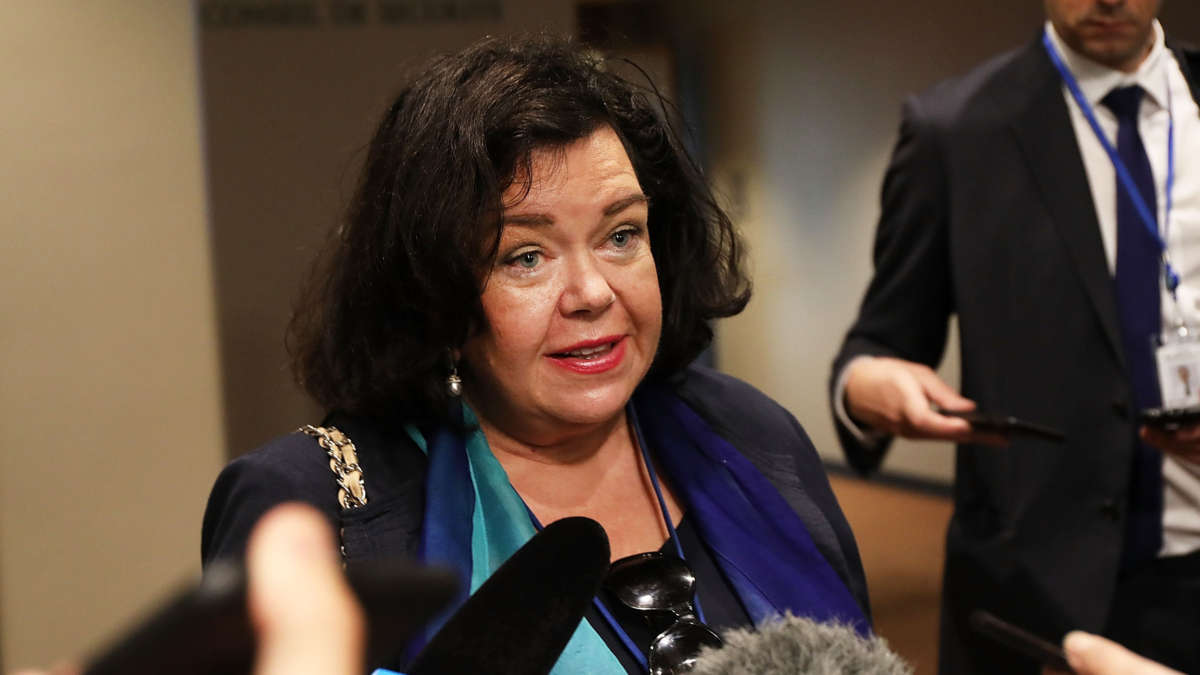 U.K. Ambassador to the U.S. Karen Pierce, pictured in a previous role in 2018, talked with NPR about the country's outline of its future foreign policy.
Image credit: Spencer Platt

The U.K. aims to keep its relationship with the U.S. front and center in the coming years, according to the U.K. government’s new foreign policy overview called “Global Britain in a competitive age.”

With Brexit complete and the U.K. out of the European Union, the U.K. is now looking to establish a new trade agreement with the U.S. and increase security ties.

“In all our endeavors, the United States will be our greatest ally and a uniquely close partner in defense, intelligence and security,” Prime Minister Boris Johnson said earlier this month.

But the Biden administration does not share the personal chumminess seen during the Trump administration — Trump and Johnson were allied on Brexit and a new trade deal, while Biden’s administration is threatening new tariffs on certain British exports and wants to rebuild alliances with Europe.

U.K. Ambassador to the U.S. Karen Pierce denies that the U.K. is on shakier ground. “President Biden refers to the U.K. as the U.S.’s closest ally. That’s certainly how we see ourselves,” she tells Ari Shapiro on All Things Considered.

Here are excerpts of the interview:

Prime Minister Boris Johnson has put out this plan for what he calls a “global Britain.” It talks about deepening ties with Washington to counter threats from Russia and China. Why wouldn’t the U.S. turn first to the European Union on those efforts, given that the EU collectively is much larger and more powerful than the United Kingdom alone?

I would say that the United States needs both the EU and the U.K. if we’re to make a coherent policy that deals with China, deals with China’s increasing international assertiveness and China’s economic approach, but also offers the possibility of cooperation on really big global issues like health and climate. But the U.K. is powerful. I don’t want anyone to get the impression we are not.

Unlike the EU, we are a global actor in security. We’re a leading member of NATO. So I would say that this is something that on both sides of the Atlantic we need to talk about together.

One key part of this global Britain strategy is to work with the U.S. to counter Russia, particularly on cybersecurity. Russian-backed hackers have already penetrated deep into American government and corporate systems, and they’ve hit other countries as well. And so far, the U.S. and the U.K. have not made Moscow pay any significant price for that, as far as we can see. What do you expect to change?

I think that although China is the big strategic issue of our time, we can’t ignore the more aggressive posture and interference posture adopted by Russia. And I think both the U.S. and U.K. think it’s a shame that Russia chooses to go down an almost gangsterish approach to foreign policy. We would like to have a productive relationship with Russia, but it’s very difficult to have that while Russia does the sorts of things you describe. There are sanctions. We keep in very close touch with the U.S. administration and with our EU partners on what more can be done to counter Russia. Part of that is about pushing back in NATO.

We continue to talk about how best to counter this. We will work together to defend our democratic systems and also to collaborate on cyber. …

Another part of this global strategy is countering China. … And you’re sending a new aircraft carrier there. Explain why. Is this primarily a show for the United States?

Absolutely not. This is all about what we see as Britain’s role in the world, helping to solve global problems. And we are a global security player. The review I was mentioning earlier talks about more effort in the Indo-Pacific because of the vital importance of that region to world trade, to global stability and security. And we want to show our support for those aims, and that’s one reason why the carrier strike group will be going there. It’s not about being confrontational with China. On the contrary, if we can find ways to cooperate on the global stage with China, we’re very happy to do so.

On the pandemic, the U.K. is far ahead of most other nations on vaccinating its people. And right now, four countries, including the U.S. and the U.K., account for about half the global vaccine doses administered. What role do you think these two countries have in helping the rest of the world get vaccinated?

The U.K., along with some partners in Europe, notably France and Germany, started the COVAX system, which is funding to enable developing countries to get access to the vaccines as they were developed. And the Biden administration has now joined that, which is very welcome. We’re hosting the G7 summit in June. And one of the things that summit will look at is more vaccines for the developing world and how we avoid future pandemics — and if we can’t avoid them, how do we collectively pool our resources so we can manage them better.

So there’s a lot going on. We can’t be complacent. Lots of developing countries don’t have the vaccines they need yet. But if we can work cooperatively, we can work out better systems to get them those vaccines. …

The world is not going to be safe from COVID until everybody who needs one can have a vaccine. So we’ve got to keep going. And while the systems for getting the vaccine to developing countries aren’t perfect, it’s a very good start.