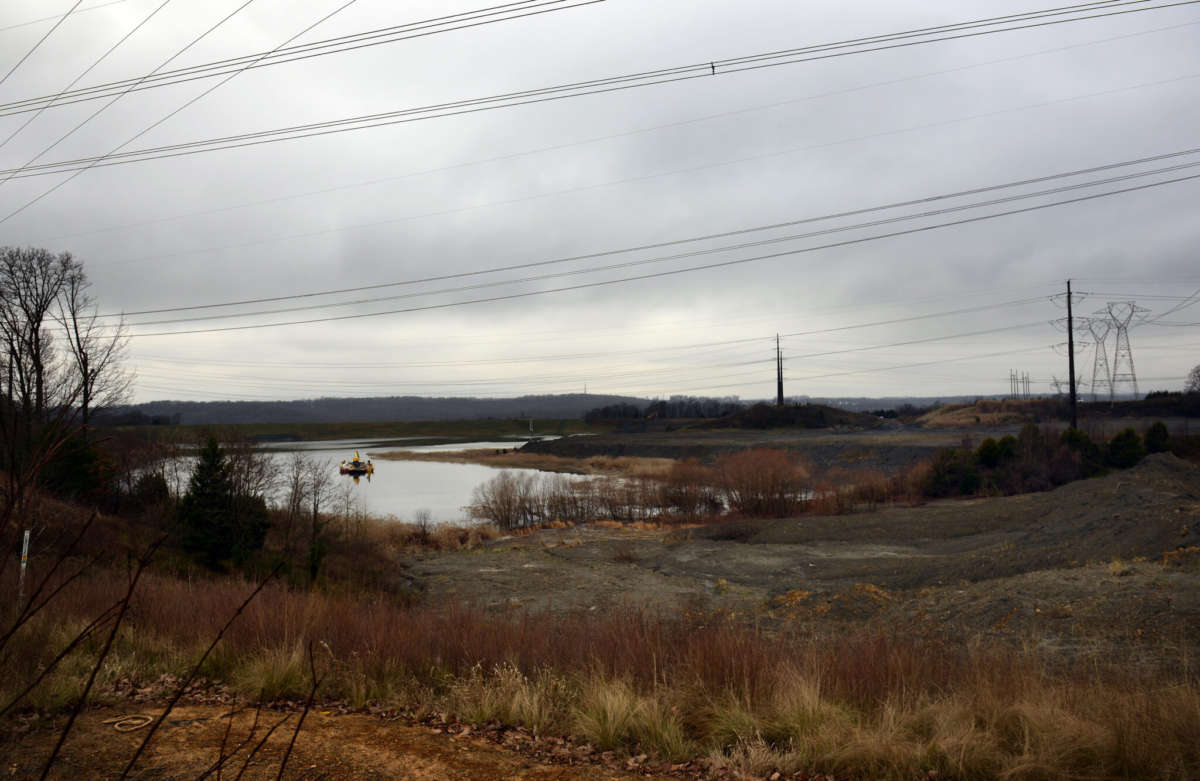 Piles of coal ash are dumped next to coal ash pond in Dumfries, Virginia, on Jan. 7, 2016. which is filled with roughly 150 million gallon of contaminated water. Credit: Astrid Riecken For The Washington Post via Getty Images. Courtesy Inside Climate News

Two of the nation’s grid operators are warning the Environmental Protection Agency that enforcement of coal ash regulations poses risks to the reliability of electrical service over a large part of the country.

The comments from PJM Interconnect and the Midcontinent Independent System Operator, or MISO, are buried deep in government dockets used by the EPA to share public records and collect comments on the agency’s first-ever enforcement of regulations on the management of waste from burning coal at power plants. They are worried that actions taken by the EPA could at least temporarily shut down coal plants when there is a need for their electricity.

The grid operators’ comments could play into a lawsuit filed earlier this month by an organization representing electric utilities, including the Orlando Utilities Commission, against the Biden administration over its decision in January to begin enforcing those same coal ash regulations. The regulations were adopted by the Obama administration in 2015 after decades of pressure from environmental groups and resistance from the industry over the best way to manage one of the nation’s largest industrial waste streams.

The regulations required most of the nation’s approximately 500 unlined coal ash surface impoundments to stop receiving waste and begin closing by April 2021, among other requirements for coal ash landfills. The rules also exempted landfills that had already closed, including at Stanton Energy Center, which is operated by OUC. As a result, the EPA may have left as much as half of all coal combustion waste ever produced in the United States unregulated by EPA.

But the ash pits, often sitting in water, are laced with contaminants like mercury, cadmium and arsenic, and regularly pollute groundwater and send particulate air pollution into nearby communities. They were a major focus of the January enforcement announcement.

The Trump administration had allowed utilities to request compliance delays, but in January, the EPA said it was taking action on the first nine of 57 extension applications filed, denying three, approving one, finding four incomplete and ruling one ineligible.

Then, on April 8, electric utilities struck back with a petition in the U.S. Court of Appeals for the District of Columbia Circuit from the Utility Solid Waste Activities Group, which includes many of the nation’s electricity utilities.

USWAG, in its court filing, asserted that the EPA in January issued “regulations and requirements … without notice and comment,” as required by law, and asked for a judicial review of the agency’s actions.

Jim Roewer, the executive director of the utilities group, did not immediately return requests for comment.

Environmental groups that fought for the 2015 coal ash regulations were pleased to see the Biden administration begin to enforce them and expected to get involved in the lawsuit.

The utilities group’s case is “extremely legally weak,” said Gavin Kearney, an attorney with Earthjustice, a nonprofit environmental law group. The EPA did not issue any new regulations in January; rather, it began enforcing the 2015 rules, he said.

“What we think is really at play here is that they are essentially trying to delay and weaken enforcement of the EPA rules around coal ash,” he said.

Kearney also dismissed any claim “that this would lead to some sort of collapse of our electrical system. Industries have had plenty of notice and plenty of opportunities to anticipate” the rule’s deadlines, he said. “The argument that they can’t figure out a reasonably expedient mechanism for handling their own waste is one that I wouldn’t give a lot of weight to.”

Coal ash and other combustion wastes are what remain after coal is burned to generate electricity. It’s one of the long-term legacies of using coal as fuel, which also includes contributing to global warming.

The heavy metals contained in coal ash are associated with cancer and other health ailments. Over the last century, hundreds of power plants produced billions of tons of ash and other combustion wastes, including scrubber sludge.

“Coal ash surface impoundments and landfills must operate and close in a manner that protects public health and the environment,” EPA Administrator Michael S. Regan said when announcing the coal ash enforcement actions in January. He said the agency would “protect communities and hold facilities accountable.”

The EPA’s press office declined to comment on the pending litigation.

MISO operates the power grid across 15 states in the upper Midwest and the Canadian province of Manitoba, serving 42 million people. PJM manages the grid in all or part of 13 states, from Virginia to Illinois, serving 65 million people.

Media representatives with MISO and PJM said they would let their organizations’ filings with the EPA on coal ash enforcement activities speak for themselves.

“MISO has experienced an increasing number of hours during the year when supply is barely adequate to cover demand even during non-peak seasons and times of the day,” MISO officials wrote. “These events, which place MISO in near-emergency or emergency conditions, are the result of the changing resource profile, including a significant number of thermal plant retirements and related increases in planned and unplanned outages.”

Given that situation, MISO wrote, it would be concerned that any loss of generation capacity as a result of EPA action “could exacerbate already dangerously thin coverage of demand in certain subregions in the north and central regions of MISO.”

PJM’s filing was more tempered. Its officials asked the EPA to coordinate with PJM on the timing of its enforcement activities, while writing that “PJM anticipates that the EPA, in consultation with PJM, should prepare to offer extensions to the extent necessary to address grid reliability issues.”

Sameer Doshi, another Earthjustice lawyer working on coal ash issues, said the EPA has already recognized concerns about grid reliability in its regulations and has included a way to allow for compliance extensions in certain circumstances.

The regulations also allow for sufficient time for reliability issues to be studied, he said

In a recent filing with the EPA, Earthjustice, representing 65 environmental and public interest groups, urged the agency to deny utilities’ requests for extending deadlines for using unlined coal ash pits.

“The EPA’s actions are essential and long overdue,” Earthjustice wrote, adding that “for a century, utilities have used the cheapest, easiest—and most dangerous—method of disposal for the toxic waste generated by coal plants: dumping it into unlined basins or ‘ponds’ next to the plants.”

The pollution from coal ash is also an environmental justice concern, Earthjustice wrote, because the majority of toxic ash sites are located in low-income or communities of color, “where residents suffer higher rates of cancer, asthma and other adverse health effects.”

The Southern Environmental Law Center, which has litigated and won coal ash cleanup cases in states like North Carolina and South Carolina, said in January that the EPA was setting a precedent for compliance nationwide.

In its recent filing on coal ash with the EPA, the law center noted that while some coal plants have closed, many others have stopped using the wet impoundments and have moved instead to dry storage in landfills with liners to protect groundwater.

“We are facing a once-in-a-generation question of how this legacy of industrial waste will be stored for decades to come, a decision that will have great impact on adjacent neighborhoods, downstream communities, and clean water for lifetimes into the future,” the law center wrote. “We are writing to express our support and appreciation for EPA’s upholding the plain, clear, and simple requirements set out in the rule.”