Two UCF Students Were Awarded onePULSE Legacy Scholarships. They Say Through Their Studies, Careers They’ll Keep the Memories of the 49 Angels Alive 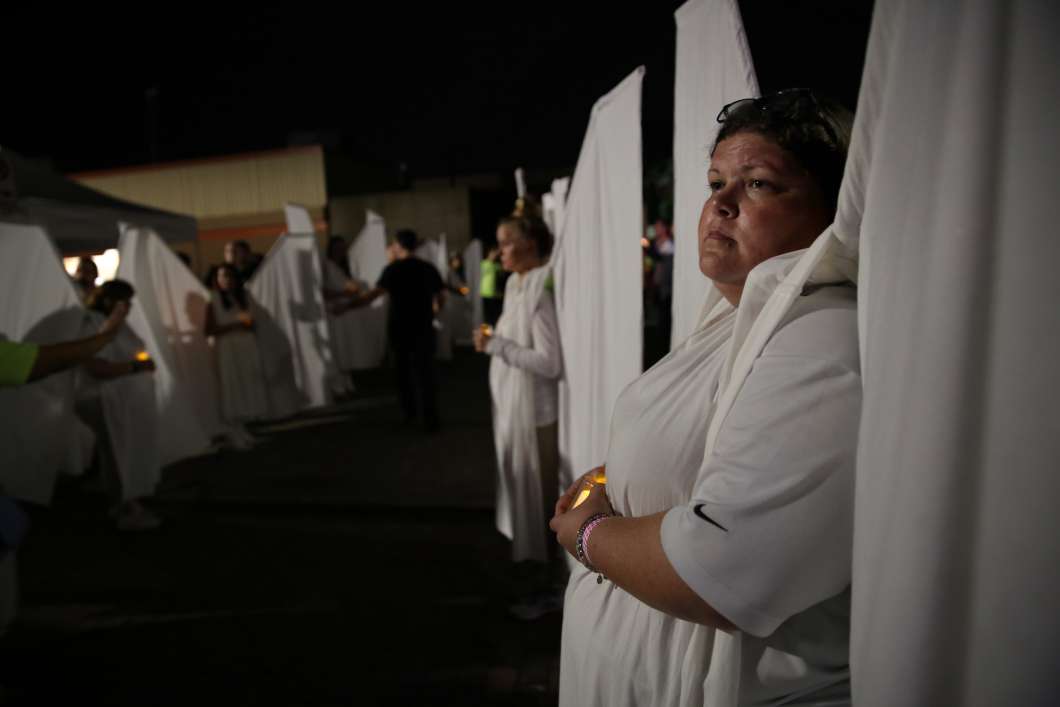 The Angels reprised their roles one year after the shooting at Pulse, protecting the club during an early morning vigil. Photo: Joey Roullette

Two UCF students were among the 49 students to receive the annual onePULSE Legacy scholarships in remembrance of the victims of the Pulse shooting. Jonathan Beltran Torres got his scholarship in honor of Darryl Roman Burt II, and Valentina Diaz got hers in honor of Mercedez Marisol Flores.

WMFE spoke with Beltran Torres and Diaz about what the scholarships mean to them and how they’ll honor the memory of those who died in the shooting.

Danielle: What did it mean to receive the scholarship for you? How are you planning on using it to pursue your studies, but also your career?

Jonathan: It alleviated the financial burden that is typically associated with like higher level education. I am currently like, am awarded the GI post-911 educational benefits, but even that doesn’t fully cover the four year cost that is usually associated with a bachelor’s degree. And for a very long time, I was kind of trying to brainstorm ideas how I was going to continue this last year, if I had to pick up a job or maybe even postpone it a semester or two and kind of get my funds. So this scholarship has alleviated and gave me a peace of mind in knowing that I can finally just finish this a year off and achieve a goal of mine and be the first generation in my family to obtain a bachelor’s degree.

Valentina: Well, this scholarship if I’m being completely honest, it really isn’t for me, it’s for my parents. They immigrated to this country from Venezuela in ’97. And they have been, you know, paving their way towards the American Dream. And I had a front row seat at that. And I was able to watch them grow and watch them support me and being 100% authentically myself. So this award really just means the world to me, because I was able to tell my parents, hey, don’t worry about this. I’ve got the rest of the year covered.

Danielle: After the shooting, how did you heal? And how did you get to the place you are now?

Jonathan: It was such a such a big shocker because I just assumed that we were kind of past this point, we were, you know, in a more loving place. And the tragedy was a wake up call for a lot of us. And so it took a long time, but I had, having that support system in the Army really helped me move forward. And when I got to UCF, I was introduced to a club named, OSTEM or Out in STEM, who introduced me to a larger spectrum of  the LGBT plus community.

Valentina: Well, I was going to come out. In high school, I was battling my sexuality. Not really sure of where my place was in this world. When I heard about the shooting, and I was actually very close to coming out at that point. And that shooting really just popped me back into the closet. So that ended up postponing my coming out for a while. But then I ended up in Broward College, and I realized that why not be my 100% authentic self. And that’s when I came out and I started working with the LGBTQ plus community down there in South Florida.

Jonathan: I hope that I can make him proud. I hope I can honor his name. And I hope I can always be a voice for the community.