Two Tropical Waves In Eastern Atlantic May Organize Next Week 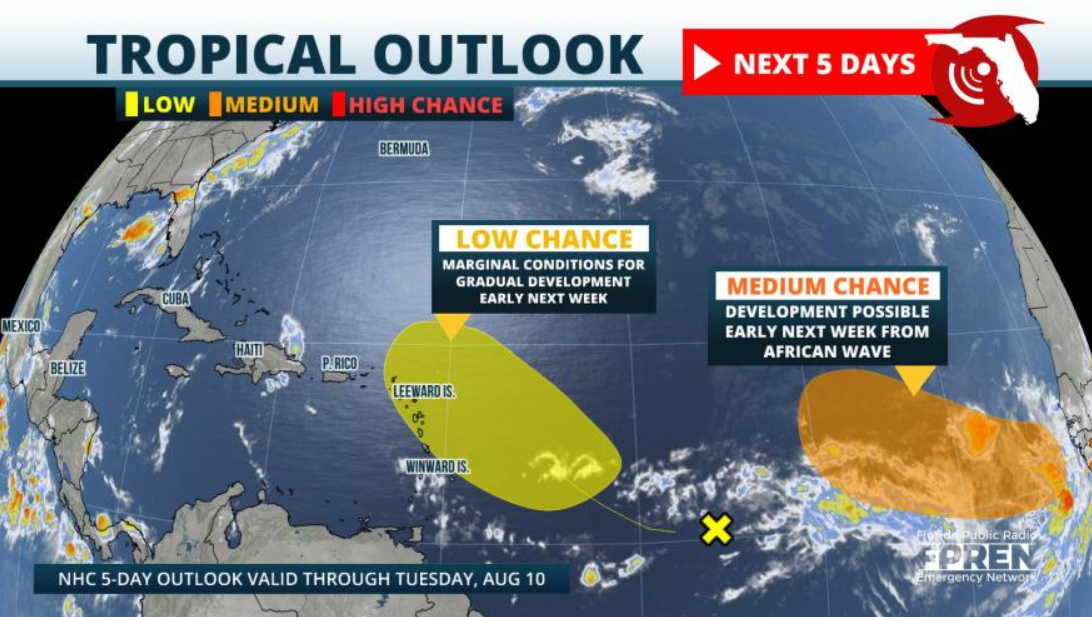 A much stronger tropical wave that is about to move off the coast of Africa has a 60% chance of development and could become a tropical depression early next week.

A largely quiet tropical Atlantic over the past three weeks may soon change in response to changes in the atmosphere over the global tropics.

The National Hurricane Center has identified two tropical waves that have a chance of developing early next week.

The first is a tropical wave that is about midway between the Cape Verde Islands and the Lesser Antilles. Satellite imagery has been showing disorganized showers in association with the wave. A ridge of high pressure in the upper atmosphere over the eastern Caribbean may create a more favorable environment for the tropical wave to develop next Tuesday or Wednesday.

As of Thursday morning, the Hurricane Center gives it a 20% chance of developing. So far, the most reliable global models are forecasting modest development, but an increase in showers and gusty winds seem likely in the Lesser Antilles late Monday into Tuesday.

A much stronger tropical wave is about to move off the coast of Africa Thursday afternoon. Heavy showers and thunderstorms ahead of the wave and along a monsoon trough (an area of rising motion because of convergence between the trade winds) may eventually lead to the formation of a tropical depression early next week.

Some models show this occurring and the National Hurricane Center says there is a 60% chance of development as of its Thursday morning forecast update.

If a depression forms, it is likely to stay over the open tropical Atlantic waters through next week.

Changes in the global tropics that modulate the concentration of showers and thunderstorms over the tropics appears partially responsible for the increase in activity over the Atlantic Ocean.

This trend is likely to continue in late August and early September, which coincides with the climatological peak of the Atlantic Hurricane Season.