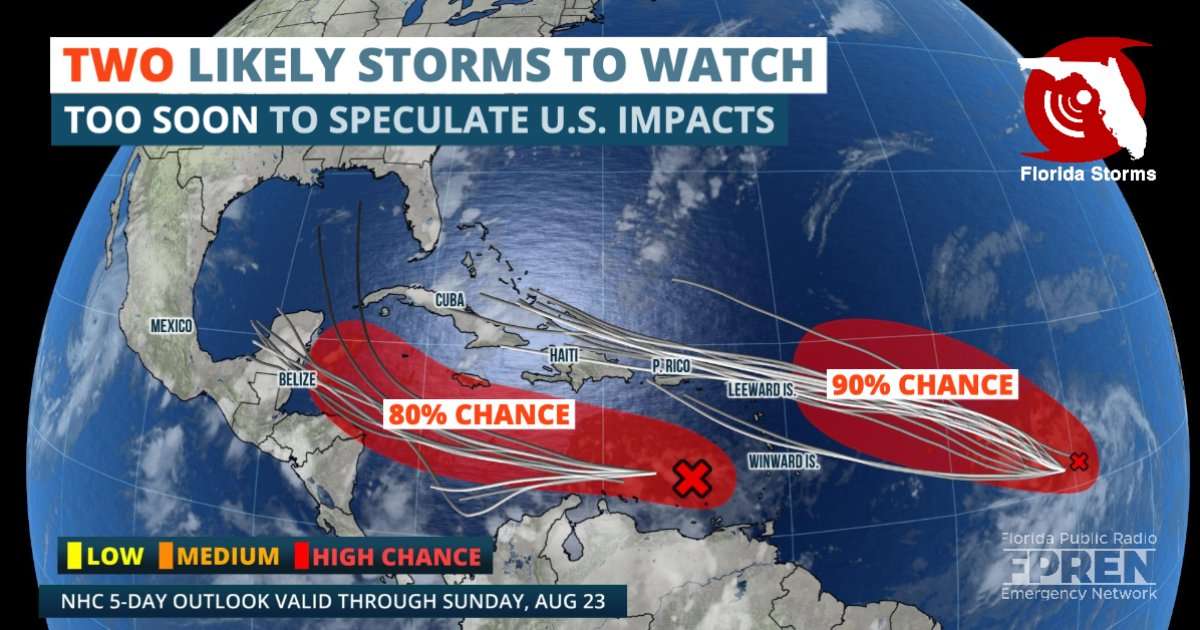 Two tropical depressions or storms are likely to form in the tropical Atlantic basin within the next two days, but it’s too soon to make a credible forecast on whether they will impact the United States.

A tropical disturbance, referred to as Invest 98 for modeling purposes, was located approximately 1,000 miles east of the Lesser Antilles as of Tuesday evening.

Invest 98 was producing a concentrated area of showers and thunderstorms, and expected to move into an environment favorable for a tropical depression to form over the next 48 hours.  As it continues to track west-northwest at 15 to 20 mph, minimal vertical wind shear and warmer-than-average sea surface temperatures could allow Invest 98 to intensify further into a tropical storm by the end of the week.

Forecast model simulations suggest Invest 98 will travel north-northwest and approach northern parts of the Lesser Antilles by the start of the weekend. Thereafter, there is much uncertainty on the potential track and intensity of the system.  It could continue westward through the Greater Antilles and move into the Gulf of Mexico by early next week, or it could pivot and favor a more northerly track toward the U.S. East Coast.

A clearer forecast is expected once a center of circulation is identified, which is likely to occur by Thursday.

The National Hurricane Center (NHC) has also been issuing updates on Invest 97, which as of Tuesday evening was located in the eastern Caribbean Sea. There is no immediate threat to land from Invest 97. However, some forecast models suggest it might track toward the Yucatan Peninsula or Gulf of Mexico by this weekend. It has recently struggled to become better organized, but NHC forecasters say it will enter into a more favorable environment for maturation by the end of the week.

While neither of these tropical systems pose an immediate threat to the United States, all residents in hurricane-prone areas are encouraged by emergency managers and meteorologists to monitor future forecasts. The most active 60 days of the Atlantic hurricane season has begun, and this is generally when hurricanes are most frequent and the strongest.

If either of these two systems were to reach tropical storm status – wind speeds of at least 39 mph – their names would be Laura and Marco. Eight records for earliest named storms have been set so far this year, which include Cristobal, Edouard, Fay, Gonzalo, Hanna, Isaias, Josephine, and Kyle. The current record for the earliest twelfth named storm is Luis, which formed on August 29, 1995.