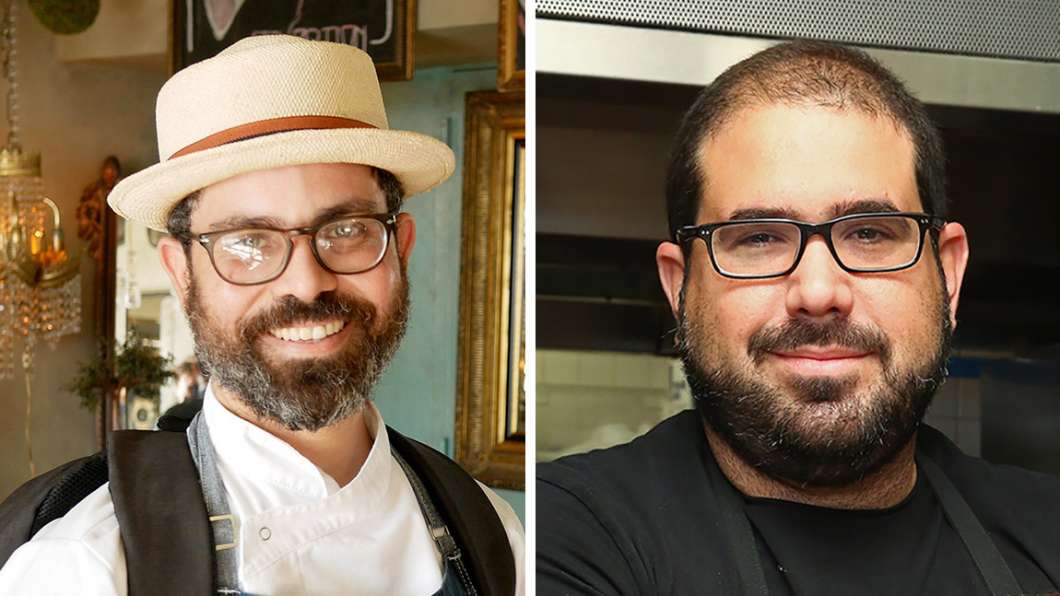 Gabriel Hernandez (left) and Jose Enrique are Puerto Rican chefs named as semifinalists for the best chef of the South category of the 2018 James Beard Awards. The recognition comes as the island's restaurants recover from Hurricane Maria.

Finalists for the James Beard Awards — known as the Oscars of the food world — will be announced Wednesday. Among those waiting to hear whether they made the cut are two chefs from San Juan, Puerto Rico, who are nursing their restaurants back to life six months after Hurricane Maria devastated the island.

Chef Gabriel Hernandez slept on his restaurant floor for three weeks and served iceberg lettuce when there was little other produce available. Jose Enrique opened his eponymous restaurant as a staging kitchen for José Andrés’ mass-cooking charity operation before his generator died. Both chefs were named as semifinalists for the Beard awards last month.

“It [was] an amazing surprise,” says Hernandez, a first-time semifinalist and the chef and co-owner of Verde Mesa in Old San Juan. “Especially these last couple of months have been a really hard process to restore the restaurant.”

In December, Hernandez spoke to NPR during the lunch service at Verde Mesa. Then, as now, he had not resumed dinner service because of a lack of clientele. He had three cooks instead of the nine who worked before the hurricane. His credit card machine didn’t work. His air conditioner was still inoperable after the storm broke his compressor.

But at least his restaurant was open. After the hurricane hit, Hernandez had to camp out in Verde Mesa — with power out across the island, his electric storm shutters at home would not open. Hurricane Irma, which hit in early September, had depleted his emergency savings, leaving him exposed when Maria made landfall two weeks later. Even if he had reopened his restaurant back then, he says, “there was no economical movement in San Juan.”

Hernandez was able to reopen in early November only because a guest knocked on his door and offered him a generator. He rewired his kitchen to use only one electrical appliance instead of four and used Sterno cans to heat a stew menu.

Nearly all of Puerto Rico’s food is imported from the mainland U.S. In recent years, amid an economic recession on the island, a local farm movement blossomed, including several farm-to-table restaurants. Hernandez says his restaurant aims “to create a new culinary identity” for Puerto Rico. But after the storm, about 80 percent of the island’s meager crops were destroyed.

In December, Hernandez celebrated the return of fresh radishes, butter lettuce, eggplant and chayote, a local squash. He served the chayote thinly sliced with chunks of mango and flecks of cilantro and black sesame as a tangy appetizer. Also on the menu: Serenata de Bacalao, a salad of yams, hard-boiled eggs and cod, which traces back to Spanish colonists who packed their barges with the dried, salted fish.

Hernandez is an accidental chef. He studied electronics engineering technology but found he didn’t like the field. So he started working as a runner in a local restaurant, then became a waiter and bartender. Nine years ago, he and a partner decided to open a simple soup and salad eatery in Old San Juan.

In the beginning, “we didn’t have the money to hire a chef, so I started working in the kitchen,” he says.

Verde Mesa evolved over the years and moved to a bigger space seating 40, with airy windows letting in a sea breeze and vintage chandeliers hanging amid sea-green-painted walls. Eventually, Hernandez says, he hired a professionally trained sous chef and kitchen supervisor. He says he paid his sous chef a salary even when his restaurant was closed after Maria because he imagined he would be crucial to recovery. “Starting over without a sous chef I’ve been training for so many years [would be too] hard,” Hernandez says.

For Jose Enrique, James Beard recognition is an annual exercise. He has been a semifinalist or nominee for the best chef of the South category each year since 2013. Enrique trained at the Culinary Institute of America in Hyde Park, N.Y., and cooked in New Orleans. About a decade ago, he moved back to Puerto Rico and took over a restaurant in an old house in San Juan’s Santurce neighborhood. His restaurant has no sign to mark its presence, but it is steps from La Placita, the market square where each night locals drink and dance to salsa music in a handful of bars.

Enrique says before the storm, his restaurant had become a pilgrimage point. Lines snaked out of the charming veranda; guests waited as long as two hours to grab one of his 37 seats.

He managed to stay open for about 10 days after the storm thanks to a generator. During that time, celebrity chef José Andrés enlisted Enrique — and his restaurant’s kitchen — in his mission to feed the hurricane victims.

Then his generator died and he could not get it fixed amid the surging demand. So Enrique closed the restaurant for nearly two months.

“I tried to do something every day in the restaurant — open the windows, clean. … It was a rough time,” he says. He finally reopened after electricity was restored to San Juan. “I think if we would have had another two weeks without power, we would have been closed” for good, he says.

Before the storm, Enrique says, he had days when nearly 75 percent of his menu was locally sourced. Now, he is far from that.

“Even now it’s hard to get plantains, which is something everybody eats here every day,” Enrique says.

The James Beard Foundation will announce its shortlist of nominees Wednesday. Myriam Ocasio, a local food writer, says she thinks a win is a “long shot” for either Hernandez or Enrique. It’s not because of a lack of talent, Ocasio tells NPR in a an email, but because the awards have tended to “pick chefs from the mainland, overlooking ours. I feel that Puerto Rico is the culinary destination of the Caribbean, but we just have not been recognized as such.”

Enrique says regardless of how the awards turn out, Puerto Rico is experiencing a rebirth. He says his business has recovered to two-thirds of its former volume. Before the hurricane, he says, local growers were cultivating “beautiful carrots” and flavorful honey. Now, he says, that farming movement is showing signs of life again.

“I believe it’s going to come back bigger than before the hurricane,” he says.