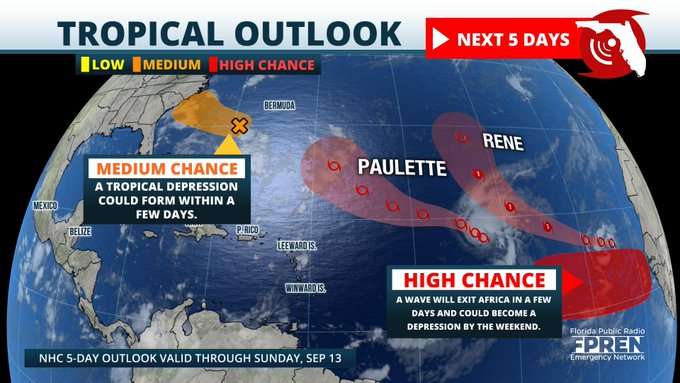 Two new tropical storms have formed in the central and eastern Atlantic over the past 24 hours, and there are two additional areas being monitored for potential development.

Despite the flurry of activity, Meteorologist Jeff Huffman says there are no current threats to Florida.

“Tropical storms Paulette and Rene are both likely to stay over the open waters of the Atlantic through this weekend. Closer to home, a disturbance south of Bermuda might acquire tropical characteristics before approaching the Mid-Atlantic states, but it is unlikely to produce much more than just some heavy rain for portions of the Carolinas.”

Jeff says there’s also another tropical wave emerging off the west coast of Africa that might develop in four or five days, but that it could be at least a week before we gain any confidence on where it may track.