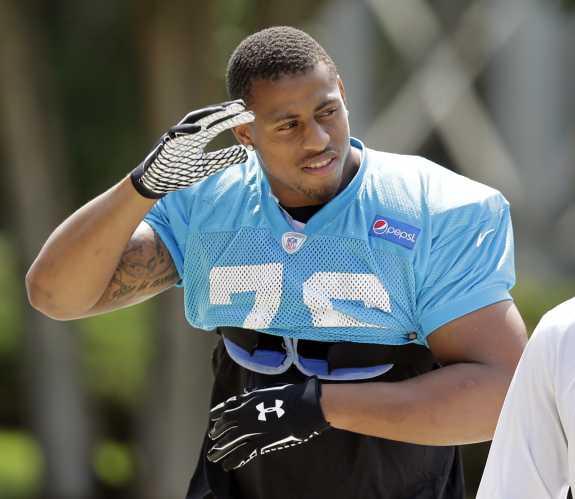 Two more players were benched by NFL teams on Wednesday over allegations of domestic violence.

First, the Carolina Panthers placed their star defensive end Greg Hardy on the exempt list and then the Arizona Cardinals deactivated running back Jonathan Dwyer.

As ESPN reports, Hardy was benched because he “was found guilty by a judge in July of assaulting and threatening his ex-girlfriend.” Hardy appealed that decision and is facing a jury trial that begins Nov. 17.

According to the Arizona Republic, Dwyer was arrested by police on Wednesday after they received allegations that he assaulted his wife in July.

“Police said the woman left the state with the child shortly after the incident. Phoenix police investigators took a report on the incident on Sept. 11 and detectives have been seeking out-of-state medical records and interviewing witnesses, according to a Phoenix police spokesman.

Of course, this wouldn’t be news if, as we reported, the start of the NFL season hadn’t already been “marred by criminal cases that link two of its stars — [Adrian] Peterson and Ray Rice — to violent off-field episodes.”

Both Hardy and Dwyer will receive full pay while they wait for their cases to work their way through the justice system.