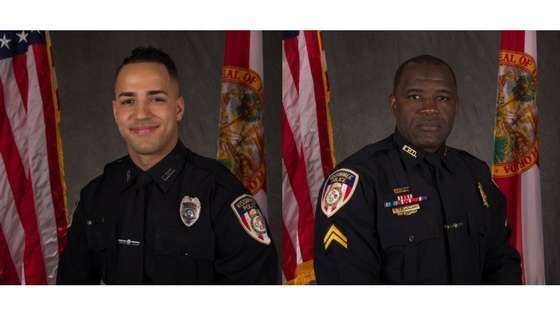 Two police officers are dead in Kissimmee after being shot last night. Police have a suspect in custody.

Officer Matthew Baxter and Sergeant Sam Howard were responding to a suspicious persons call when they were surprised by gunfire, according to Kissimmee Police Chief Jeff O’Dell. The shooting happened around 9:30 p.m. Friday at McLaren Circle in Kissimee.

The two were transported to Osceola Regional Medical Center. Both Baxter and Howard died from their injuries.

Video from the crime scene helped located the suspect about two hours after the shooting. Chief Jeff O’Dell says Everett Miller was apprehended and will be charged with first degree murder.

“He will be transported to the Osceola county jail and he will be wearing officer Baxter’s handcuffs,” he said Saturday morning.

Chief O’Dell said the investigation was still active. He said the department receives many calls to the area the officers were shot.

Two officers in Jacksonville were also shot Friday. One officer was in critical condition, the other in stable condition after the incident. A suspect in that case was shot and killed.

This is a breaking news story. Check back for updates. An earlier version of this story misspelled Everett Miller’s name.