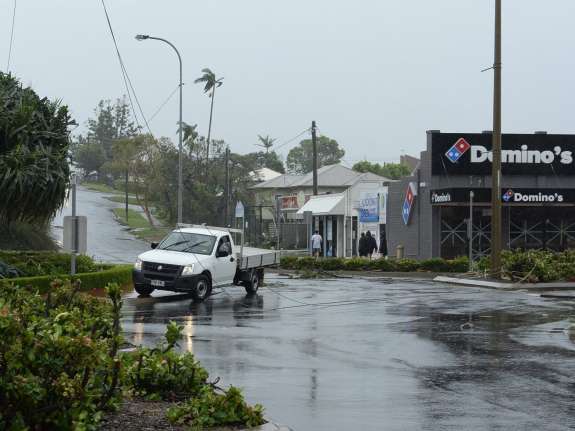 The aftermath of Tropical Cyclone Marcia in Yeppoon, Queensland, Australia, on Friday. The small town on the Capricorn Coast is bearing the brunt of the wild weather. Another Cyclone has made landfall on the country's north coast.
Image credit: Karin Calvert

In what is being described as an unprecedented occurrence, Australia is getting slammed by two major cyclones at the same time.

The Sydney Morning Herald reports that Cyclone Lam blew out a wind monitoring station as it barreled ashore as a Category 3 storm at Elcho Island in Australia’s North Territory . Winds were 100 mph, the highest ever recorded at that location. Meanwhile, 1,000 miles to the southeast in Queensland, an even stronger hurricane, Cyclone Marcia, hit as a Category 4 storm with winds gusting to 177 mph. It has since been downgraded to a Category 1.

While Lam targeted sparsely populated Arnhem Land, Marcia has made landfall northwest of Brisbane and has more people in its direct path. Although there were no reported of deaths or injuries from Marcia, Channel Nine Brisbane says 57,000 homes were left without electricity and that flooding had left some areas inaccessible to utility crews.

“Emergency services scrambled to evacuate thousands of homes before pulling out and warning anyone who had not left to barricade themselves inside,” the news agency reported.

According to the BBC, the mayor of Rockhampton says the town is in lockdown.

“Roofs were destroyed and powerlines and trees felled in the town of Yeppoon, where the Queensland premier, Annastacia Palaszczuk, said families had undergone “a terrifying experience.” …

“Yeppoon was the only populated area that took the brunt of Marcia at its most powerful, with the cyclone weakening to a category three by the time it reached the city of Rockhampton, which nevertheless also suffered widespread wind damage, flash flooding and power outages.”

As we reported on Thursday, several thousand people on Elcho Island lost power when Lam made landfall there.

The Morning Herald says the twin storms are the strongest on record to make near-simultaneous landfall in Australia. It also says that the storms are the first to hit Australia this year and the third latest to arrivals in the past five decades.