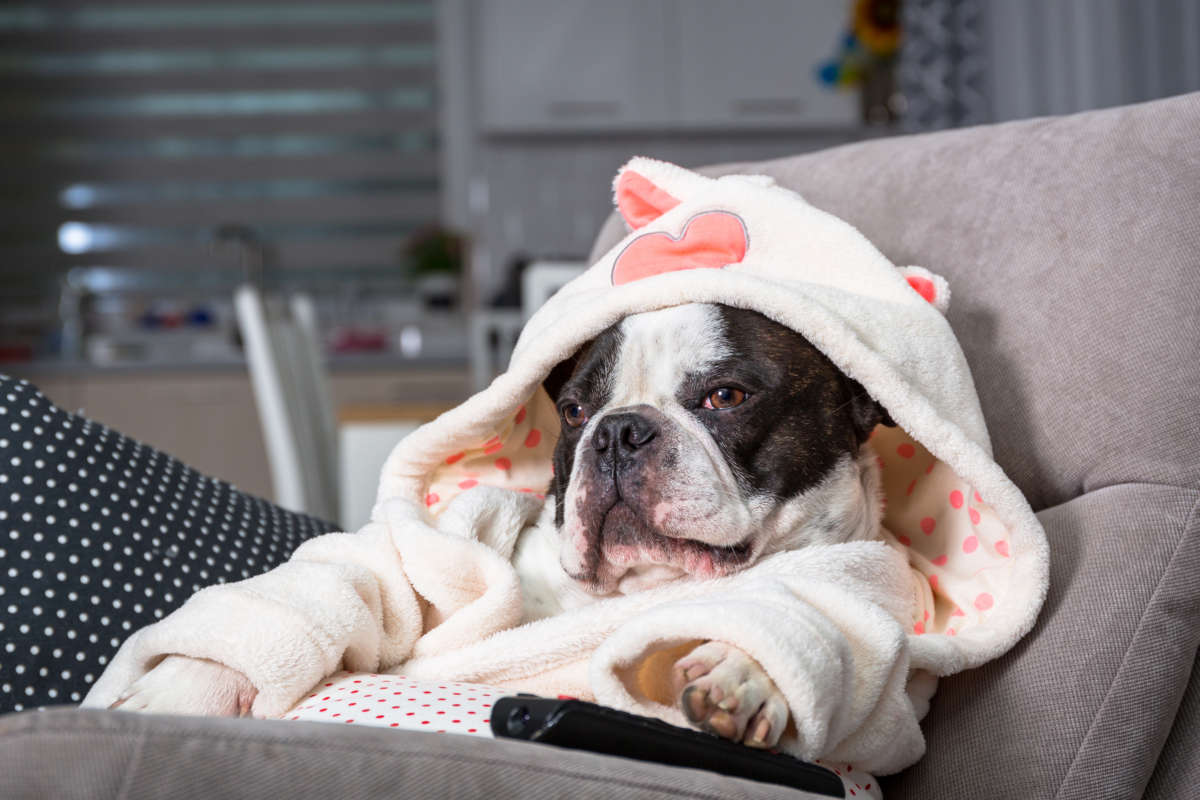 TV is a great way to fill up a few hours. We’ve pulled together a long list of recommendations from WMFE’s staff for your weekend social distancing.

On My Block: A group of life-long friends navigates life and their teenage years in South Central Los Angeles. It’s funny, heartfelt and dramatic. This is a show you can watch with the whole family. The show tackles real issues while allowing for some comic relief. (Netflix)

All American: Inspired by the life of NFL player Spencer Paysinger, All American shows just how complicated life, family and football can get. This is a great show to binge for everyone missing sports amid the coronavirus pandemic. (The CW)

Self-Made: Inspired by the life of Madam CJ Walker: If you never understood why hair is so important to black women, then this is a must-see. Within the first few minutes of this series, I was snapping my fingers saying, “Yes, yes, yes.” (Netflix)

Peaky Blinders: A street gang in Birmingham, England, after WWI led by the fierce and gorgeous Thomas Shelby. The show is told from the perspective of the Shelby family, which makes you feel like you’re a part of the Peaky Blinders yourself. It’s packed with drama, romance and action. And did I mention the GORGEOUS Thomas Shelby! (Netfllix)

Kim’s Convenience: The show follows a Korean family living in Canada and running their family business. This show breaks cultural barriers and I think everyone can see a little bit of their family in the Kims. (Netflix, Amazon)

This is Us: Because it’s all about family. (NBC, Hulu)

Brooklyn Nine-Nine: These quirky, yet lovable workmates have solved crimes and gotten up to shenanigans for seven seasons. Cast led by Andy Samberg and Terry Crews.

The Good Doctor: A young, autistic doctor balances saving lives as a surgeon at St. Bonaventure Hospital with finding friendship, love, and family in his new town of San Jose. Cast led by Freddie Highmore.

One Day at a Time: Three generations of women support one another through life’s daily challenges and triumphs. Norman Lear of All in the Family and The Jeffersons writes and directs EGOT Rita Moreno and a rotating cast of TV greats.

Umbrella Academy: a 2019 quirky superhero story for adults about what happens when a dysfunctional family of teenage caped crusaders grow up. (Netflix)

Star Trek: The Next Generation: for the ’90s smart, ethical sci-fi vibe… and the new follow-up series Picard for a contemporary take. (Amazon/CBS All Access)

Battlestar Galactica: the gritty, powerful 2004 series that rewrote the rules of sci-fi (Syfy.com)

A Year in Space: Chronicle’s NASA’s Scott Kelly as he embarks on a year in space to understand long-duration’s effects on the human body and mind. This TIME/PBS documentary series explores themes of isolation — something poignant in the era of coronavirus. (Netflix)

From the Earth to the Moon: A visually stunning docudrama series telling the story of the Apollo program. Produced by giants like Ron Howard and Tom Hanks, it’s a thrilling retelling of humanity’s most intrepid space mission — and 50 years on, it’s the perfect time to revisit. (HBO GO)

Star Trek: The Next Generation: I hate to admit this, but I’ve never seen this series. I’m taking this time at home to catch up, so follow along with me. I just finished the first episode and I’m hooked. (Amazon Prime)

Zoey’s Extraordinary Playlist: If you like pop music and semi-good singing and dancing… you’ll love this show. Fun with lots of good songs.

Vanderpump Rules: Mindless, crazy, jaw-dropping entertainment. And, of course, Lisa Vanderpump… you have to LOVE her!

Parks and Recreation: This show’s fun, light-hearted, positive, storyline and cast are constantly delightful, easy to love and rewatch, and a great source for easy laughs. All around heartwarming and hilarious. (Netflix and Hulu)

Locke and Key: Bingeable, mysterious, deliciously dramatic at times, and not scary! This show is addictive and keeps you guessing. (Netflix)

The Chef Show: If you loved the movie Chef as much as I did, then this show will be your new jam. If you love to cook, this show is also perfect for you (and go watch Chef if you haven’t, because you’ll love that, too!). With two great hosts and an otherwise rotating cast of chefs, locations, and types of food, this show is easy to watch and educational, and should also inspire you in the kitchen (vital in these stay-indoors times). (Netflix)

Fleabag: This show is an anomaly — it is at once sad, funny, devastating and somehow more relatable than I imagined. Also lots of Britishness for the anglophiles out there. (Amazon Prime Video)

Life’s Too Short: Another British gem, this show is a mockumentary featuring Warwick Davis — known for his work as an Ewok in Star Wars. The fictionalized version of himself and irony that follows is indescribable — just watch it. (Amazon Prime Video)

I Dream of Jeannie: an American fantasy sitcom television series starring Barbara Eden as a 2,000-year-old genie and Larry Hagman as an astronaut who becomes her master, with whom she falls in love and eventually marries.

W1A:  It’s a goofy Britcom about the inner non-workings of the BBC. Modernized Monty Python fans will enjoy, as will Downton Abbey fans looking for more of Lord Grantham. (Three seasons on Netflix)

Years and Years: Wondering what will happen in the next 10 years? Years and Years prophetizes how a British family lives through nationalism, financial collapse, climate change, technology and, yes, pandemics. (Six episodes on HBO GO)

Tales of the City, More Tales of the City, Further Tales of the City: Armistead Maupin’s light-hearted look at San Francisco life through the eyes of landlord lady with a secret, The womanizing server-lawyer, the love-seeking twink and fish out of water Mary Anne Singleton. You’ll make new friends and relive the ’70s and ’80s the way you wish you had. We’ll talk about the latest one after you read the books! (Various)

The Valhalla Murders: An Icelandic crime show about a series of murders relating to an old photograph from a boys’ school named Valhalla. Lead detectives Kata and Arnar, played by Nína Dögg Filippusdóttir and Björn Thors, must solve the case while dealing with personal issues, political intrigue and an investigative journalist. (Netflix)

The Witcher: Based on the books by Polish writer Andrzej Sapkowski, The Witcher is the story of Geralt of Rivia played by Henry Cavill, one of the few remaining Witchers in the world. He’s a traveling monster slayer for hire, mutated and trained from an early age to slay deadly creatures. Toss a coin to your Witcher and enjoy watching all eight episodes. (Netflix)

Carnival Row: Mythical creatures have fled their homeland due to war and gathered in an early industrial city. There is an anti-immigrant movement toward the mythical folk. Orlando Bloom plays an Inspector and war veteran who sympathizes with the Fae to the disgust of many of his colleagues and a string of unsolved murders escalate tensions. (Amazon Prime)

The Waltons: Family life in the Depression but very family-friendly. I’ve been to The Waltons Museum three times.

Hill Street Blues: Police drama that was so different from the ones before it. Gritty but had heart. Beautiful theme song by Mike Post. Winner of 18 Emmy awards.

The Monkees: Only two seasons, but a fun show with great music. If you don’t know who the Monkees are…

The Odd Couple (original): Neal Simon comedy with Tony Randall & Jack Klugman. One is neat, one is a slob.

The Twilight Zone: Rod Serling was the brainchild of this Emmy award-winning show that was horror, science fiction and more. Many had a surprise ending.

Seinfeld: Still funny today. Not that there’s anything wrong with that.

The Simpsons: I watched it when it was a short on the Tracey Ullman show and still watch today. Longest running animated TV series. Fun fact: it is banned in China. Ay caramba!

Rockford Files: Private Detective Jim Rockford works solving closed cases but the show’s focus changed over the years. He’s an ex-con who was accused of a crime he didn’t commit. Each opening had a different message on his answering. Some are very funny. Theme by Mike Post. Great detective show that won five Emmy awards. The theme was a Top 10 hit in August of 1974 (Billboard Hot 100).