Desmond Tutu, an icon who helped end apartheid in South Africa, dies at 90 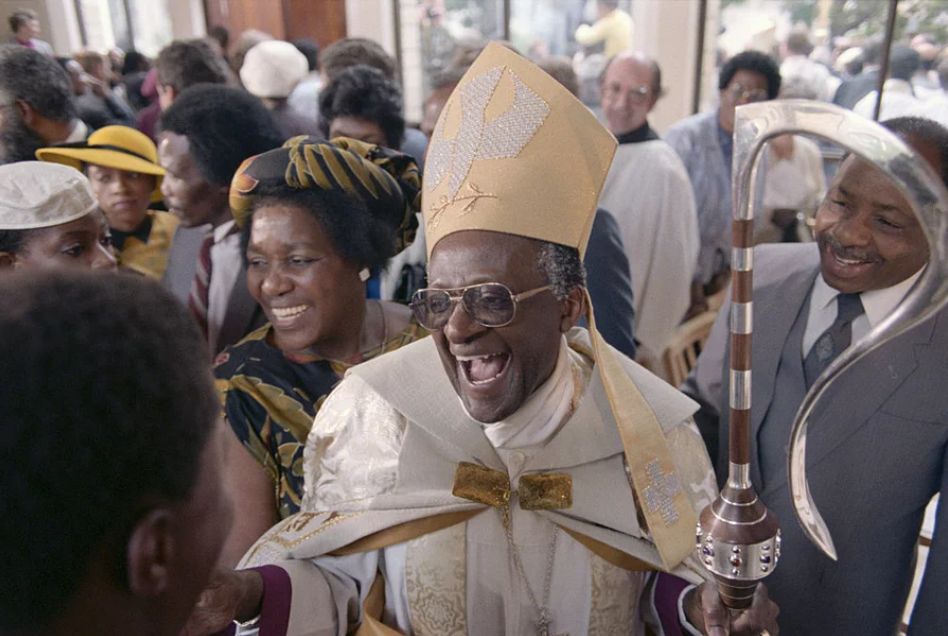 Desmond Tutu smiles after being appointed Anglican Archbishop of Cape Town in 1986. His wife, Leah, is at his side. David Turnley/Corbis/VCG via Getty Images

Nobel Peace Laureate Emeritus Archbishop Desmond Tutu, a towering figure who helped bring an end to apartheid in South Africa, has died in Cape Town. He was 90.

His death was announced by South African President Cyril Ramaphosa, who called Tutu “a patriot without equal; a leader of principle and pragmatism who gave meaning to the biblical insight that faith without works is dead.” Tutu had been hospitalized several times in recent years.

The passionate advocate for freedom headed the country’s Truth and Reconciliation Commission in the 1990s, a grueling inquiry that investigated crimes during the apartheid era. It was widely seen as a crucial, healing step during South Africa’s transition from apartheid to democracy. The TRC became a model for similar commissions in other parts of the continent.

When Tutu voted for the first time in 1994 in South Africa’s first democratic elections, he captured the unbridled joy of a country emerging from a troubled past.

“I want to sing, I want to cry, I want to laugh. Everything together. And jump and dance,” he gleefully told reporters. “The day has arrive — yippee!” Watch the moment here:

It was a long journey to get to that ballot box. For Desmond Mpilo Tutu, the son of a high school principal, the church was not his initial vocation. After abandoning plans to go to medical school, he started off as a teacher. But the champion of justice felt that the inferior education the white-minority rulers were imposing on Black South Africans was an insult.

Tutu then turned to the priesthood and was ordained in the Anglican church in 1960. Fifteen years later, he became the first Black Dean of Johannesburg and committed publicly to the fight against apartheid.

The campaigning priest was arrested more than once, but drew strength from his convictions and fellow South Africans, he said. He condemned all forms of violence and confronted both the apartheid police and vengeful Black mobs necklacing alleged spies by throwing tires around their victims and setting them alight. By now firmly on the international radar, Tutu warned the apartheid leaders that racism defied the will of God and apartheid would not succeed.

“The system of this country, apartheid, is immoral. The system of this country is evil,” Tutu said during that period. “What must we say, which we have not yet said? What must we do, which we have not yet done? To tell the world that all we want is a new South Africa, where all, Black and white, will be able to live as equals.”

In 1984, Desmond Tutu was awarded the Nobel Peace Prize, which recognized his work in the anti-apartheid struggle. “Let us work to be peacemakers,” he said during his Nobel Lecture. “If we want peace, so we have been told, let us work for justice. Let us beat our swords into ploughshares.”

The Archbishop later remarked, with his characteristic good humor, that one day no one was listening and suddenly, after the prize, anything he said — “the oracle has spoken!”

After Nelson Mandela was sworn in as president, he asked Tutu to chair South Africa’s landmark Truth and Reconciliation Commission, to look into the crimes of apartheid. For the Archbishop, the harrowing testimony was traumatic and he broke down and wept with the survivors.

“One has been deeply humbled by those we have often called the ordinary people. Deeply humbled at their resilience, at the magnanimity of spirit that they have shown,” he said.

In a 2010 interview with Morning Edition, he said the experience never shook his faith in God. “Perhaps if one listened only to the atrocities, and account of the atrocities that people committed, but we were constantly being bowled over by the extent to which people were ready and willing to forgive,” he said.

Tutu has faced health issues. Halfway through the Truth and Reconciliation process, he was diagnosed with prostate cancer in 1997 and successfully received treatment. Resilience and his sense of humor helped. He disclosed a recurrence of prostate cancer in 2005, though it did not have a noticeable effect on his hectic schedule until he retired. Tutu was in and out of the hospital in 2015 and again in 2016 for minor surgery to try to clear up recurrent issues with persistent infection linked to his cancer.

After he retired, the emeritus archbishop criticized what he considered the inadequacies of South Africa’s new leaders, especially their failure to alleviate poverty. He also continued his quest for global peace and social justice, joining The Elders, a seasoned group of world leaders, including Nelson Mandela, Jimmy Carter, Kofi Annan and others.

Nelson Mandela described the archbishop as a blessing and an inspiration.