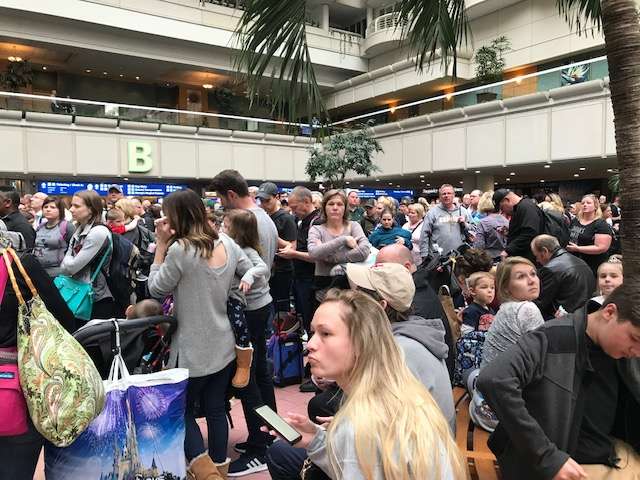 Hundreds of passengers waited at the security check points after an off-duty TSA agent jumped to his death at the Orlando International Airport. Photo: Danielle Prieur

After the death of 36 year old Robert Henry, a Transportation Security Administration officer at Orlando International Airport in February, there’s been renewed scrutiny on what some employees have described as a culture of bullying at the TSA.

In a report from Spectrum News 13 that aired earlier this month, numerous current and former TSA agents described pervasive bullying and retaliation by management.

Former TSA agents have also come forward to WMFE to tell their stories of a toxic workplace culture.

In the background of these claims, The Department of Homeland Security released a report that found that two of the six reasons for high attrition rates among TSA workers include, “management’s competence, communication, promotion of negative work environment, disrespect, lack of trust, lack of appreciation or recognition, and unfair practices in appraisal, discipline, and advancement.”

The union for TSA workers is calling on the agency to end the pattern of of bullying and retaliation, and congressional leaders are also looking into the TSA’s workplace culture.

WMFE is investigating claims of harassment, intimidation, retaliation and other toxic work environment conditions at airports across the country.

If you have experienced or witnessed retaliation, harassment, discrimination or bullying at the TSA, please consider taking this survey to aid WMFE’s investigation.

90.7’s Abe Aboraya and Danielle Prieur join Intersection to talk about their reporting on the issue. We also hear from Congressman Darren Soto, a Democrat who represents Florida’s 9th congressional district. Soto sits on the House subcommittee on Communications and Technology which oversees aspects of the Department of Homeland Security. And Deborah Hanna, union representative for TSA agents at Orlando International Airport, joins the program.

If you someone you know is exhibiting warning signs of suicide, call the national suicide prevention lifeline at 800-273- 8255