TSA In Turmoil: Changes In The Agency 12 Months After The Death Of Rob Henry 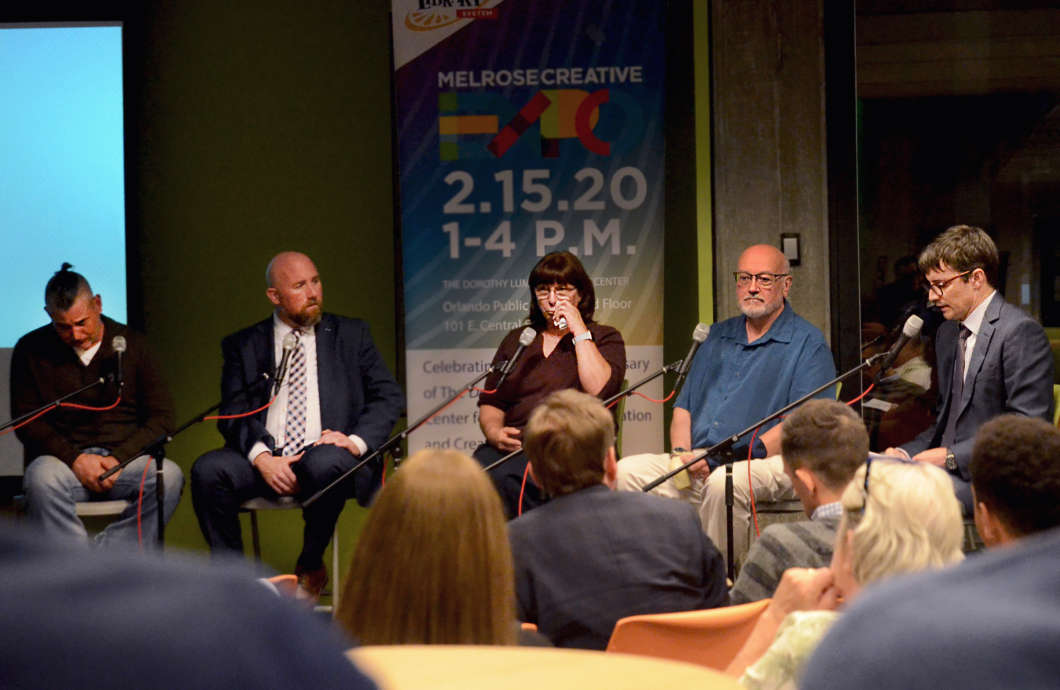 Henry’s death prompted questions, including about the workplace culture at TSA. An investigation by WMFE’s Abe Aboraya and Danielle Prieur uncovered allegations of abuse and retaliation at TSA.

In the 12 months since Henry’s death, TSA has instituted changes to address those concerns, both across the agency and at MCO. But have those changes been enough?

We put those questions to a panel of journalists who covered the story, and friends and colleagues of Henry’s in an event recorded at the Orlando Public Library’s Melrose Center.

“I spent probably five or six hours there talking to people after it happened,” said Prieur as she recounted going to the airport to report on the incident.

“People responded in different ways. But I saw some very touching things. At one point there was a TSA worker who went and just sort of sat, right kind of where the fountain is where Rob would have actually fallen and just kind of was looking through pictures of Rob on his Facebook page,” she said.

“It was just a very emotional thing, obviously, that a young man had taken his life during the government shutdown. nobody really knew why, in the middle of a very, very busy day.”

Wildman described his conversations with Rob Henry’s close friend and former colleague Brenda Shearer, as he tried to piece together the events that led to Henry’s death.

“And it just a lot of it wasn’t making sense,” said Wildman.

“He had a good relationship with [Shearer’s] children. He played video games with him, he would drop them off at the theme parks. He did not have did not sound like he had monetary problems. So when I was putting this all together with Brenda, I just figured figured out that there’s something more here.”

Aboraya said it was this sense that a bigger story lay behind Henry’s death that also led WMFE to put together an investigation, including a survey that was sent out to TSA agents across the country.

“We were able to, through that [survey] find people who, in other parts of the country had also had issues where they had attempted suicide and basically said that the working conditions at TSA were a huge factor in that,” said Aboraya.

He said the investigation lent credibility to the idea that “this isn’t just something that was happening at TSA in Orlando, that there’s something a bit broader going on within, you know, an organization that’s extremely large and has a very important mission to keep everyone safe when they’re flying.”

Journalist and photographer Isaac Babcock said he got a sense of the stresses that TSA officers experience through his conversations with them  as he took photos for WMFE.

TSA officer Dave Platt’s dog, Tippy, was the key to getting the photo.

“That dog helped him open up,” said Babcock.

“Everything else up until we were talking about his dog and what he does to escape mentally from what he was doing, it was short sentences, it was very brief. It was like he was keeping himself locked down. Once he could talk about what he did to escape from this, that’s when we started to really see him as a person instead of somebody that’s trying to escape from what he’s had to deal with with the TSA.”

Wildman said from his conversations with TSA officers now, 12 months after Rob Henry’s death, improvements in working conditions have been slow to come.

“I want to sit here and tell everybody things are getting better, but the employees are saying otherwise,” said Wildman, adding some officers he spoke to said they were also unhappy with the support they’ve gotten from their union.

US Rep. Darren Soto (D- FL) spoke to WMFE about legislative changes to improve the working conditions of TSA officers.

“I’ll be following up over the next couple of weeks to see the progress of the functions, at the management level, of suicide prevention.” said Soto.

“And I’ll also be working with the individual officers and their union to make sure that it continues to be up to snuff, but we don’t need to have other shutdowns because that contributes to it. When you’re working in a high pressure situation long hours and you’re not getting paid, it’s nearly impossible for people to keep strong mental health.”

In the second panel we hear from some of Rob’s friends and colleagues: Brenda Shearer, Stan Tuchalski and Joe Donadio, and mental health consultant and former first responder Ryan Gallik.

Shearer, who no longer works for TSA, said she thinks changes at the agency since Henry’s death, such as moving some of the senior managers, have “made people feel a little bit better about their job.”

“But anytime you have that many people picking on other people, there’s always going to be one that they have to choose. And I don’t see that stopping until you get rid of the ones that are doing it,” said Shearer.

Tuchalski credits acting Assistant Federal Security director, Pete Garcia, with helping bring awareness to the need for suicide prevention training, putting up signage and facilitating tabletop discussions around the issue– and commemorating the memory of Rob Henry with ribbons for TSA officers to wear.

“So those are glimmers of hope,” said Tuchalski.

“But, you know, much more can be done and much more support that the sad thing is Mr. Garcia will no longer be with us after the end of March…and who knows what the future holds?”

“It hurts,” said Shearer, reflecting on the 12 months since Henry’s death.

“But I don’t know [that] anyone could have stopped him.”

“They want it to get better there. They don’t want people to have to go to work every day and worry what’s going to happen to him that day.”

Joey Donadio said he’s skeptical that conditions will improve for officers after a TSA investigation found no evidence Henry was bullied.

“It’s pretty sad and what breaks my heart is I know that a lot of people had a lot of hope with this investigation,” said Donadio.

“A lot of people were interviewed and …then when it came back as no bullying that’s it. All the wind was taken out of the sails. I think that people had hope: this was the most hope they had for change. And it just, it fizzled out.”

After taping the panel, we asked Deb Hanna, president of the AFGE Local 556, the union representing TSA officers at Orlando International Airport, if enough is being done to change the workplace culture.

“They use progressive discipline. They’re stepping back a little bit, people are acting a little bit better. We interact better with one another.”

“I don’t think that the officers are trained well enough to recognize. I mean, for me, I was a crisis intervention supervisor with teenagers for 25 years. So I recognize the signs and I talked to people and I’ll pick up on some things, and I did not with Robert, which will haunt me until I die probably.”

Asked about comments that some TSA officers don’t feel supported by the union, Hanna said she hasn’t heard those concerns herself.

“Our main job is to protect them. But there’s some things that can’t be done, because TSA and Congress come in and say, ‘You can’t negotiate this, you can’t do this, you can’t do that.’ And when they’ve got all the power, and we don’t have a lot, we’re kind of stuck. But we listened to their concerns and we try to do what we can.”

Click on the links below to watch the videos of the panel discussions and an extended version of the Rep. Darren Soto interview: