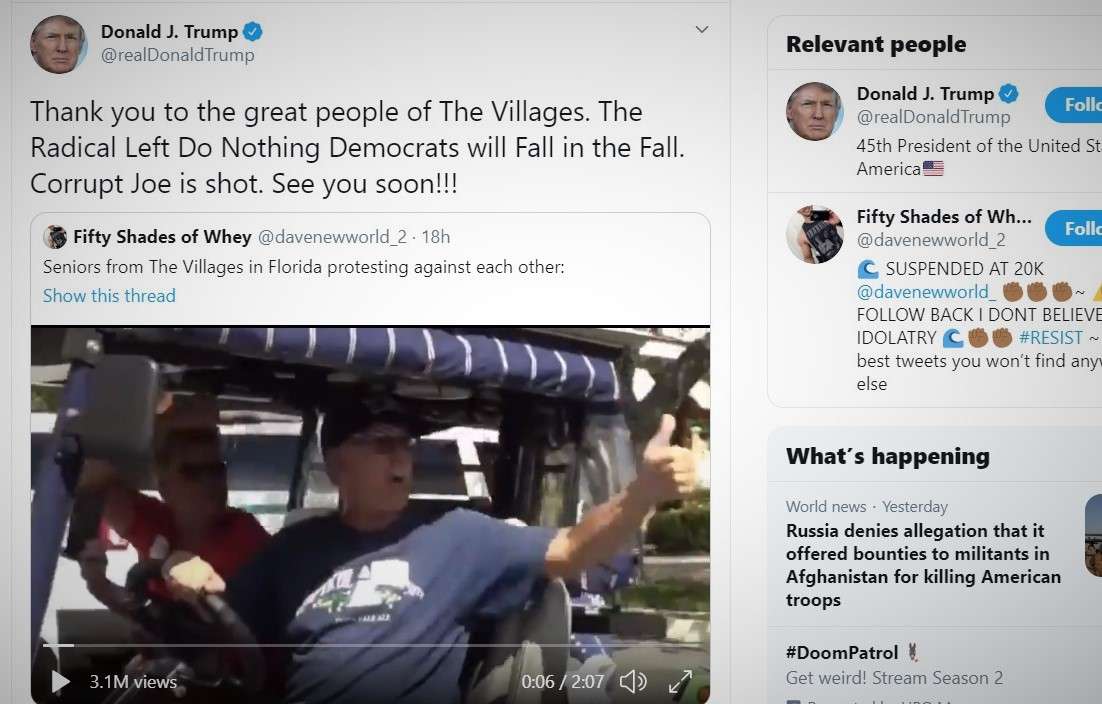 President Donald Trump makes a shout-out to The Villages and, in the process, retweets a "white power" remark on Sunday morning.

President Donald Trump on Sunday retweeted a post showing part of a golf cart parade in The Villages in which one supporter shouts, “White power!” at anti-Trump protesters.

The president added: “Thank you to the great people of The Villages. The Radical Left Do Nothing Democrats will Fall in the Fall. Corrupt Joe is shot. See you soon!!!”

A Republican club in a retirement enclave in Florida has denounced a video that President Trump retweeted on Sunday showing an apparent Trump supporter shouting “white power” at protesters. pic.twitter.com/jt3ocfnlNU

The president drew criticism on national TV talk shows Sunday morning, as hosts on CNN and MSNBC questioned whether he was stoking racial division.

In a statement, White House Deputy Press Secretary Judd Deere did not apologize for the retweet or condemn the term, which is associated with white supremacy. He said: “President Trump is a big fan of The Villages. He did not hear the one statement made on the video. What he did see was tremendous enthusiasm from his many supporters.”

On “State of the Union,” former National Security Advisor John Bolton — a recent Trump critic — said maybe the president wasn’t paying attention, hadn’t watched it all and was just responding to a video showing his supporters. It’s noteworthy that “white power” is shouted in the first 10 seconds of the video.

Trump has previously called out to The Villages on Twitter and promised to visit the sprawling retirement community south of Ocala.

The initial tweet — by @davenewworld_2 — pulled a clip from a longer video posted by Villages-News.com. It shows a June 14 parade celebrating Trump’s birthday, Flag Day and law enforcement.

Anti-Trump protesters can be heard haranguing Trump supporters in their golf carts with foul and insulting language.  Immediately before the “white power” remark, a protester shouts, “Where’s your white hood?” and “Racist!” at the golf cart driver.

The Villages Republican Club responded to the news, saying they are “appalled” by the video retweeted by Trump.

In a tweet, they say the comment is not what they stand for and is not a reflection of Villages residents.

TVRC was appalled by a recent video from Lake Sumter Landing which was recorded at a recent golf cart rally and tweeted by POTUS. In the video a man was yelling “White Power”. This is NOT what we stand for and is NOT a reflection of Village residents. We must unite as a Country!

Benjamin Swazey of WUSF contributed to this report.