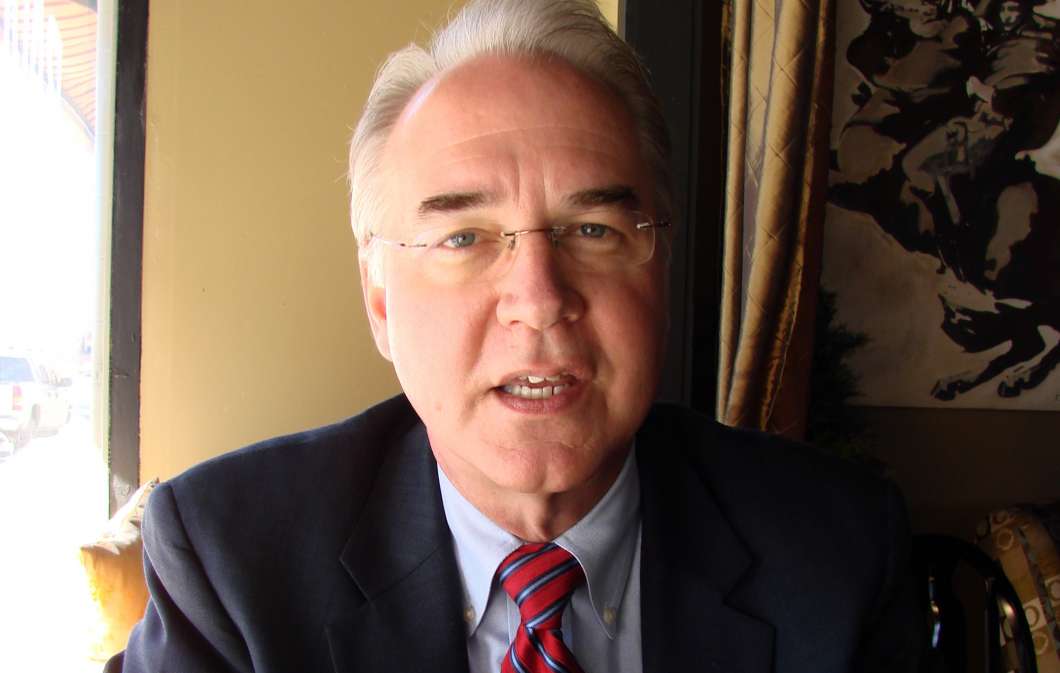 Tom Price, the nominee to head the U.S. Department of Health and Human Services, got a sweetheart deal from a foreign biotech firm. (Pruneau, IowaPolitics.com)

It sold nearly $1 million in discounted shares to two American congressmen sitting on House committees with the potential power to advance the company’s interests, according to company records and congressional filings. They paid 18 cents a share for a stake in a company that was rapidly escalating in value, rising to more than 90 cents as the company promoted an aggressive plan to sell to a major pharmaceutical company. Analysts said the stock price could go to $2.

One of the beneficiaries was Rep. Tom Price, a Georgia Republican poised to become secretary of the Department of Health and Human Services, which regulates pharmaceuticals. Price told HHS ethics officials Thursday that if appointed, he will divest himself of the Australian stock as well as stock in about 40 other companies that could pose conflicts. He said he would sell within 90 days of appointment and abstain from any decision-making about companies in which he or his family has had an interest.

He has already seen about a 400 percent paper gain in his investment in Innate Immuno, stock trading records show.

The other and more substantial August investor was Rep. Chris Collins, a Republican from upstate New York, who along with family members owns about 20 percent of the foreign company. A key supporter of the president-elect, Collins sits on a key health subcommittee.

The outlines of the stock deal, first reported by the Wall Street Journal, resurrected concerns about powerful public officials gaining investment opportunities unavailable to the public, including from companies whose profits might be influenced by political decisions.

A review of corporate documents raises a more unusual aspect of the deal. Innate Immuno is a foreign company which, in documents and presentations, is explicit about a business strategy targeting the U.S. market, where the amount that can be charged for a new drug is generally far higher than in other countries.

Innate Immuno has hinged its strategy on winning a preliminary green light for a new multiple sclerosis drug, known as MIS416, from the HHS’s Food and Drug Administration. It says in its private placement offering documents that money raised in the U.S. will help it finance the FDA approval process, which can take years. Innate Immuno CEO Simon Wilkinson could not be reached for comment.

Price’s financial disclosures show that he acquired his first small stake in Innate Immuno in January 2015, investing about $5,000. He made two more small purchases in the company that year, declaring a small loss on the stock in his 2015 financial disclosure.

Government ethics experts said this week that Price’s stake in Innate Immuno as it tries to develop a blockbuster drug would clash with his public duties, making divestiture mandatory.

While ethics rules for Congress are relatively relaxed, “the minute you go to the executive branch, it’s a lot stricter,” said Richard Painter, a University of Minnesota law professor who was President George W. Bush’s chief ethics lawyer.

“Dr. Price takes his obligation to uphold the public trust very seriously,” said Phil Blando, a spokesman for the Trump transition. He has “complied fully with all applicable laws and ethics rules governing his personal finances.”

Innate Immuno told investors it would seek “investigational new drug” status from the FDA, which could shorten the approval process. The FDA would not confirm this week whether the company has filed an application.

The drug is in a small clinical trial in New Zealand due to end in April. MS drugs are especially expensive for patients, costing $5,000 a month or more.

Positive trial results could set the stage for Innate Immuno’s stock to reach $2, said Australian stock analysts. In that scenario, Price’s investment of between $50,000 and $100,000 would be worth between $555,000 and $1.1 million. House financial disclosures require reporting of ranges of value but not specific amounts.

“You could easily picture a drug that is in the billions of dollars in revenues, but that’s assuming the [trial] data is there,” said David Blake, an analyst at Bioshares, a newsletter covering Australian life sciences stocks. “It’s really got to deliver.”

A physician who chairs the House Budget Committee, Price also sits on the House Ways and Means Committee and the Congressional Health Care Caucus. He has a history of contacting the FDA on behalf of industry campaign donors.

His ownership of Innate Immuno while serving in the House creates its own appearance of a conflict of interest, ethics authorities said.

“There is an appearance problem … to have members of Congress buying and selling stocks that are affected by the work of the committees they sit on,” Painter said. “It could be perfectly legal, but it looks terrible and shows lack of judgment.”

Price’s Innate Immuno stake is one of more than 40 companies he identifies as potential conflicts with the HHS job, including stock in Pfizer, Eli Lilly and Bristol Myers Squibb.

Collins, who sits on Innate Immuno’s board, has been a major shareholder in the company since 2011 and has gradually increased his family’s holdings to about 20 percent, corporate documents show. His investment in the private placement last summer was worth $720,000, according to regulatory documents.

“Congressman Collins has followed all ethical guidelines related to his personal finances during his time in the House and will continue to do so,” said spokesman Michael McAdams.

All told, including Price, Collins and other U.S. investors, the sale raised $1.8 million. In addition to funding the FDA approval process, the company said it would use the money to finance the clinical trial and develop potential manufacturing for the drug.

All U.S. investors in the August deal received a 12 percent discount to the stock’s market price at the time, which is not unusual in private placements, said Stuart Glazebrook, a biotech analyst for Gordon Capital Research, a securities research company in Melbourne, Australia.

For small companies, private issues can be more efficient than selling new public shares, he said. Selling at less than the market price raises odds of attracting investors, he said.

“It’s an incentive,” he said. “It’s like Amazon offering 20 percent off today only if you commit today.”

“For the agency’s leaders, even holding onto a single share of stock in a regulated company is prohibited,” he said.

A decade ago FDA Commissioner Lester Crawford resigned and pleaded guilty to two criminal misdemeanors after being charged with concealing stock ownership in food and drug companies the agency regulated.

Innate Immuno executives have talked openly about selling the company to one of a number of pharmaceutical company suitors if its clinical trial is successful. Many small pharmaceutical companies with hot drugs go that route, reaping shareholders millions in quick profits.

The larger company would have the deep pockets to invest in more clinical trials that might be needed to obtain regulatory approval, analysts said.