Trump Will Win Again. No Way He’ll Win. Be Wary Of 2020 Election Predictions 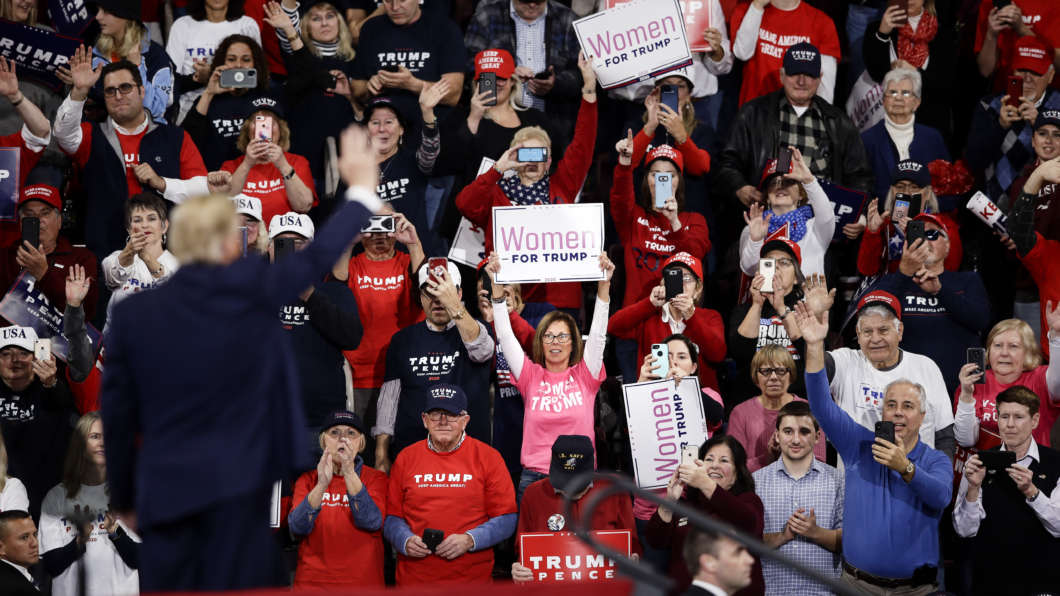 Don’t put too much stock in all those New Year’s predictions you’re hearing and seeing about American politics in 2020. Anyone saying they know what will happen is probably just trying to get our attention.

And probably succeeding. We’ve all fallen for headlines and clickbait proclaiming foreknowledge of events. We do it for sports, the stock market and just about any other outcomes that cannot be foreseen.

“He’s going to win again,” solemn voices say, referring to President Trump and the re-election bid he formally launched shortly after his inauguration in 2017.

“There’s no way he can win again,” say others, with much the same tone of finality and certitude.

Both conclusions come from the same place. No matter how many rational arguments or pieces of evidence are deployed to justify it, these are statements straight from the gut.

Fact is, no one knows or can know what will happen to Trump in 2020 — or to his challengers. No one knows what else will happen in 2020 that will affect and perhaps determine the November outcome.

Things large and small will intervene, things that cannot be foreseen or assessed until they intervene.

The presidential race is not the only one we see through a glass darkly. We do not know whether Republicans or Democrats will win the majority in either chamber of Congress. We can run the numbers and calculate probabilities based on polls and past experience. But we are left saying both chambers will most likely retain their current majorities, possibly with narrower margins.

Such a ho-hum, belt-and-suspenders prediction, is not going to mesmerize all those “eyeballs” that all media now pursue and perseverate over. Nothing has the allure of a confident – even if unreliable – prediction about the presidency.

The more confident the prediction, the more arresting the assertion, the more it demands our attention. But attention is one thing, credence should be another.

Take the most obvious example: 2016. As the corks were popping on New Year’s Eve four years ago, few could have foreseen how that year in politics would unfold.

Think back. Hillary Clinton was seen as unassailable in the Democratic primaries and a strong prospect to be the nation’s first woman president. She had dominated the early Democratic debates and polling. She had weathered multiple hearings in Congress set up by Republicans who blamed her for American deaths in Libya (where attackers assaulted a U.S. consulate and killed the American ambassador in 2012).

Bernie Sanders, an independent socialist in the Senate, was not a Democrat but was the only threat to Clinton in the primaries. A huge Republican field was steadily devouring itself. Onetime presumptive nominee Jeb Bush was fading, and the rising candidates were Sen. Ted Cruz, a hardcore conservative from Texas and Donald Trump, a self-defining businessman and TV personality from Manhattan.

Trump was still regarded as a novelty act by many, despite his lead in many polls. He had survived, and even thrived, through innumerable statements widely regarded as fatal errors.

Few foresaw the surge for Sanders in Iowa (a virtual tie) and New Hampshire (a landslide win) or in later portentous primaries such as Michigan and Wisconsin. The party unity Clinton was supposed to enjoy proved illusory. The coalition that twice elected Barack Obama would weaken in nearly all its elements. Clinton would lose the vote among white women.

Meanwhile, Trump would prosper through unimaginable controversies and rally to his side even those who had savaged him as untruthful and unqualified — including Cruz and Sen. Lindsey Graham of South Carolina.

The actual events of the election year were not just improbable but impossible to foresee, as were the remarkable reactions of many of the voters themselves.

It is easy to dismiss 2016 as an outlier – even as outlandish. But past presidential cycles may well look more predictable in hindsight than they were in real time. In hindsight, whatever happened can come to seem inevitable. (After all, somebody winds up winning and making some prediction seem prescient.)

For example, few look back on 2012 as a highly suspenseful cycle. But eight years ago, it was far from clear that Obama would win a second term. In mid-December 2011, his approval in the Gallup Poll was just 42%, three points lower than the latest Trump reading in the Gallup this month.

Back then, on the Republican side, half a dozen contenders topped the polls for at least a week or two late in 2011 and it took months to winnow the field. The nomination fell to Mitt Romney, who ran a creditable race and had a plausible scenario for winning through October. On Election Night his staff was so confident that they did not even prepare a concession speech in case they lost.

Four years before that, needless to say, the 2008 cycle did not begin with great certainty for the eventual winner. Then-senator Obama was making a move in the polls and getting noticed. But he had yet to win the Iowa caucuses. After a long intra-party battle, he wound up with about as many votes in the nominating events as rival Hillary Clinton, but with an edge in delegates.

On the Republican side, the hot ticket in late 2007 was still a former mayor of New York named Rudy Giuliani. His candidacy would soon crash without ever getting truly airborne, and the nod went to Sen. John McCain of Arizona, who shocked the party with a largely unknown running mate in Gov. Sarah Palin of Alaska. Even so, McCain might have won if a Wall Street meltdown had not kicked off what became known as the Great Recession.

Needless to say, none of these developments had been glimpsed in the waning days before that election year began.

But surprising outcomes are scarcely a recent development. The Gallup organization has been tracking presidential popularity since the 1940s, and its findings are fascinating when one focuses on the transition into each presidential election year. Some incumbents end the pre-election year spiking or falling, but most are found chugging along in the mid-range. There are relatively few clues as to what awaits.

Thus you have Harry Truman at the end of 1947 beginning a slide that would take him down to 36% approval by spring of his re-election year. No wonder so few thought he had a chance even before a split over civil rights at the Democratic National Convention spawned a third-party challenge and seemed to seal Truman’s fate.

You also have the example of Richard Nixon, who in December 1971 faced his re-election year stuck at 50% approval in the Gallup – but wound up with nearly 60% of the popular vote in 1972 (carrying every state but Massachusetts). As that landslide piled up on Election Night it was hard to believe the Democratic nomination had been deemed so desirable by so many hopefuls when the primaries began.

It’s hard to remember now, but Ronald Reagan also looked vulnerable in his third year in office, falling as low as 35% in early 1983 in a lingering recession. By December, things were better and Reagan had climbed all the way back to 54%. Still, the Democratic nomination in 1984 was a prize sought by many and contested all the way to the convention. (It went to former Vice President Walter Mondale of Minnesota, who in November carried that state and that state alone.)

When polls may mislead

The presidential fortunes of Jimmy Carter were particularly difficult to read. He had fallen as low as 29% approval in the Gallup in the summer of 1979 before rocketing back to 54% in the rally-round-the-flag days after the seizing of the U.S. Embassy in Tehran. At first, the hostages taken there seemed to bolster support for the incumbent, helping him dismiss the intraparty challenge of Sen. Edward Kennedy in 1980. But in the longer run the crisis undermined his presidency, his polling collapsed in 1980 and he lost badly to challenger Reagan.

The classic case of a president whose polling may have created a false sense of security was provided by George H.W. Bush. The first President Bush went to a vertiginous 89% approval rating in the Gallup in March 1991 after U.S. troops achieved victory in the Persian Gulf War. But a recession set in later that year and Bush fell all the way to 52% by December.

That number alone may not have been ominous, had it not been for the long descent. But Bush kept falling, even after the recession ended, all the way down to 29% in August. Although he recovered in the fall, he lost the presidency to Bill Clinton that November.

His son, George W. Bush, was president in September of 2001 and riding at 51% approval in the Gallup when terrorists struck the World Trade Center and the Pentagon. The next Gallup pegged him at 90% approval, but like his father he saw this soaring score fall back to earth – or more specifically to 50% — late in his third year in office. He stayed in that mid-range, never falling or rising more than three points, right through 2004 and a narrow re-election that November.

The only consistent lesson

So electoral history gives us a variety of looks. Presidents can appear formidable and still falter. They can wobble along seeming comparatively weak and yet reassert themselves.

They can muddle through as so many do, getting thumbs up from half the electorate or less. Yet from that plateau they may rise like Nixon or plummet like Carter and the first President Bush.

Much has to do with how the world behaves during a presidential year. Much, too, depends on the opposition party, its nominee and its unity. Then there are the prospective pitfalls of third parties or independent candidates – especially those who can self-finance. Even an underfunded distraction such as Ralph Nader in 2000 can make a difference in a state, which can make the difference in the Electoral College.

So at this point no one should rest easy, but no one should despair. It is best not to bet the ranch at any stage of the game, and surely not one year out.

The one thing we can safely say is that there’s nothing that can be safely said. History, our one best guide, directs us to keep an open mind and await further developments.