Trump vs. DeSantis: A simmering rivalry bursts into view 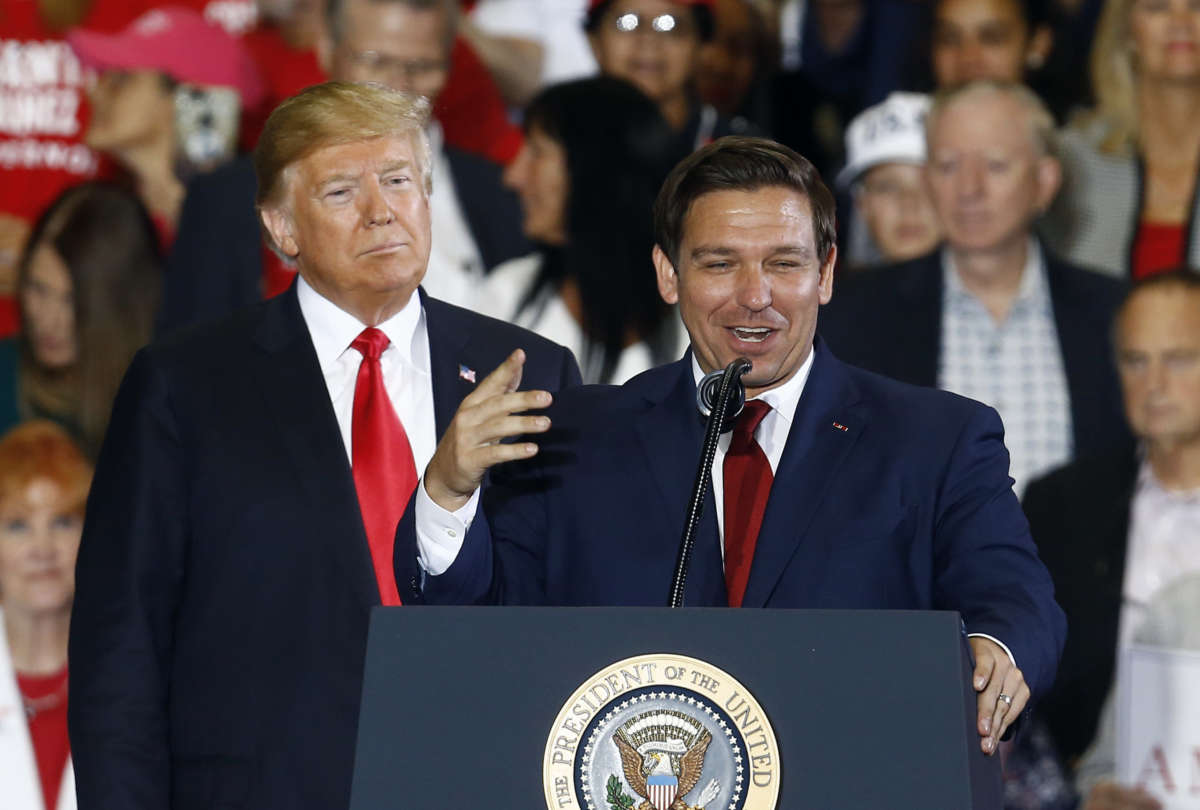 WASHINGTON (AP) — Donald Trump and Ron DeSantis have been on a collision course from the start.

Eyeing the Florida governor as his most formidable foe within the Republican Party, the former president has sought to keep DeSantis in his place, often noting the role his endorsement played in lifting the relatively obscure congressman to the leader of one of America’s largest states.

DeSantis, for his part, has long praised Trump and mimicked his style, but has notably declined to put aside his own White House ambitions as the former president prepares to seek his old job again. In the clearest sign of tension, the two held dueling Florida rallies in the final days of this year’s midterm elections. At his event, Trump unveiled his new derisive nickname for DeSantis, calling him Ron DeSanctimonious.

The simmering rivalry between the

Republican Party’s biggest stars enters a new, more volatile phase after the GOP’s underwhelming performance in what was supposed to be a blockbuster election year. DeSantis, who won a commanding reelection, is increasingly viewed as the party’s future, while Trump, whose preferred candidates lost races from Pennsylvania to Arizona, is widely blamed as a drag on the party.

That leaves Trump in perhaps his most vulnerable position since he sparked the violent insurrection at the U.S. Capitol on Jan. 6, 2021. As he moves forward with plans to announce a third presidential bid on Tuesday, Trump is turning to a playbook that has served him through decades of personal, financial and political turmoil: zeroing in on his enemies’ perceived weaknesses and hitting them with repeated attacks.

“This is how President Trump fights,” said Michael Caputo, a longtime adviser who worked on Trump’s first campaign.

In the days since Tuesday’s election, Trump has made racist remarks about Virginia Gov. Glenn Youngkin, another potential Republican presidential candidate, saying his name sounds Chinese. He’s blasted coverage from Fox News, which, like much of Rupert Murdoch’s media empire, has shifted its tone on Trump in recent days. But much of his vitriol is directed at DeSantis, a sign of the threat Trump perceives from the Florida governor.

In a lengthy statement, Trump knocked DeSantis as an “average REPUBLICAN governor with great Public Relations” and voiced fury that DeSantis has not publicly ruled out challenging him.

The approach recalls Trump’s strategy in 2016, when he cleared a field of nearly a dozen rivals with a scorched-earth approach that included insulting his then-rival Ted Cruz’s wife’s appearance and claiming that his father may have played a role in John F. Kennedy’s assassination. (Cruz later became a top ally in Congress.)

His attacks only become more ruthless when he found himself against the wall. After the release of the “Access Hollywood” tape, in which Trump used vulgar language to brag of sexual assault, he responded by inviting the women who accused his rival Hillary Clinton’s husband, the former president, of rape and unwanted sexual advances to a presidential debate.

“The strategy worked in 2016, no doubt about it. The difference now, and I say this with all respect for Ron DeSantis, he’s never entered the ring with a pugilist like Donald Trump,” said longtime Trump adviser Corey Lewandowski, who ran his 2016 primary campaign. “Mike Tyson has an old saying: Everyone had a plan until you get punched in the face.”

The question is whether the insults will land differently when it comes to DeSantis. Among many of Trump’s most loyal backers, DeSantis is seen as a member of the same team. In interviews over the last year at Trump’s rallies and other conservative gatherings, Trump supporters often said they see DeSantis as Trump’s natural successor. Many voiced disbelief that the two men would ever run against each other because they seem so closely aligned.

DeSantis’ allies expect the governor to make a presidential announcement after the state legislative session, which ends in May. Until then, they expect him to focus on governing and avoid engaging directly with Trump, as he has done this week.

Regardless of when a formal presidential campaign is announced, DeSantis’ supporters are encouraging him to take advantage of the interest he’s generating at the moment. Some point to former New Jersey Gov. Chris Christie as a cautionary tale, noting he generated widespread attention in 2012 as a potential presidential candidate. He demurred, and by the time he sought the White House in 2016, the energy had shifted to Trump.

“If you want to run for president, you’ve got to take your shot when it presents itself,” said Matt Caldwell, a vocal DeSantis ally in Florida.

DeSantis won reelection by a nearly 20-point margin, performing well even in many longtime Democratic strongholds. That victory, his supporters say, demonstrates the extent of his political appeal beyond the GOP’s hardcore base, which stands in contrast with Trump. Caldwell noted that DeSantis’ coalition included Latinos and suburban voters, voting blocs that Trump has largely alienated.

“The coalitions he’s built, the bridges he’s built, the voting groups that never touched a Republican before have now embraced Republicans and Republicanism in the form of the DeSantis administration,” said Brian Ballard, a longtime Florida lobbyist who served as DeSantis’ inaugural chairman and also raised millions for Trump. “He is certainly a leader and someone that I think has demonstrated the type of coalition building that we need to win back the White House.”

Above all, Republican strategists say voters are looking for a winner.

Conservative radio host Erick Erickson, who has vacillated on Trump over the years, said many of his listeners are ready for DeSantis.

“They love Trump, thank him, wish him well and are ready to part ways,” Erickson said. “Trump voters like Trump because they like winners who fight. That’s exactly how they perceive DeSantis. The only guy between the two who is a loser is Trump.”

Sensing weakness, some Republican establishment insiders have begun a series of preliminary conversations about how to use their resources to stop Trump in 2024, realizing that a crowded primary field might simply divide the electorate and allow Trump an easier path to the nomination. There is little sign the Republican establishment is ready or able to unify behind DeSantis or any single Trump alternative, however, even as some prominent Republicans begin to openly decry Trump as a political liability.

Other potential 2024 candidates, meanwhile, are waiting in the wings, with some hoping Trump and DeSantis will bloody each other so badly that voters will be eager for a less pugilistic alternative.

Sarah Longwell, a Trump critic who leads the Republican Accountability Project, said she’s for “anybody but Trump” in 2024, but she’s not necessarily excited about DeSantis.

“I hope there is a robust Republican primary,” Longwell said. “I certainly want every Republican to run against Trump. But I also think the Republican Party can and should do better than a cheap imitation of Trump, which is what I think Ron DeSantis is.”

The Republican Jewish Coalition’s primary benefactor, Miriam Adelson, has vowed to stay neutral in the 2024 Republican primary, even after the group aggressively supported Trump in the last election.

Hogan, a fierce Trump critic for years, is increasingly expected to run for the Republican presidential nomination himself.