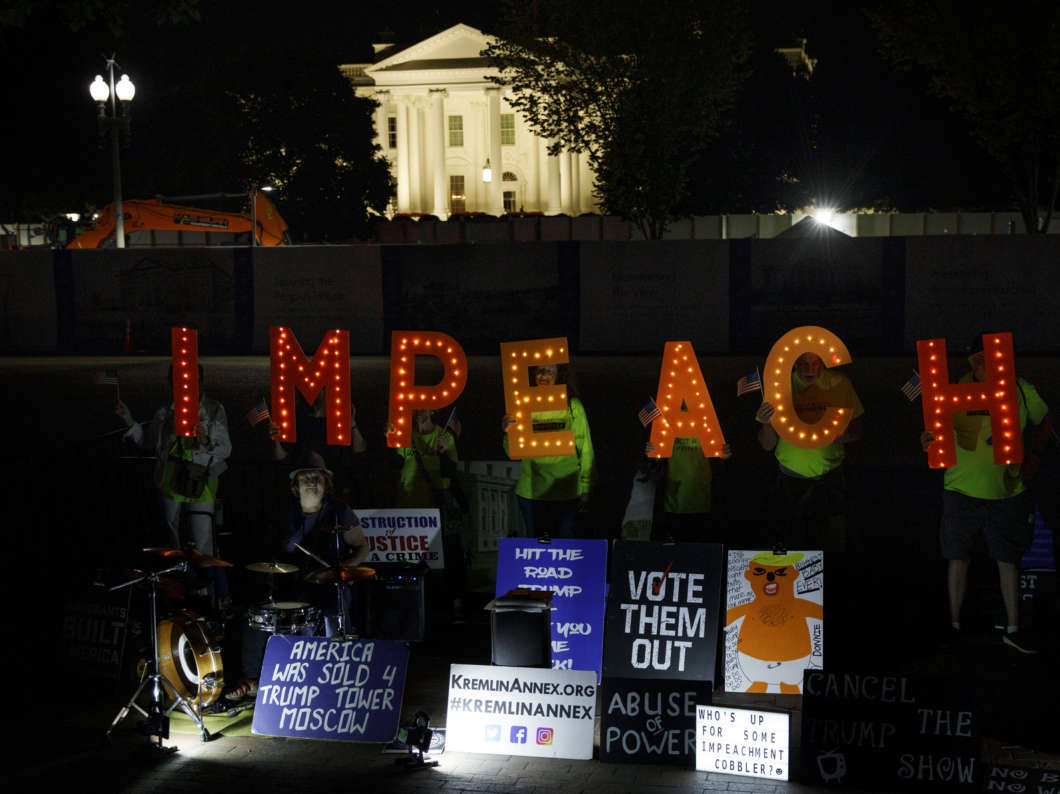 The White House released an account Wednesday of President Trump’s scrutinized call this summer with the new Ukrainian president. The president says the record of the call proves he did not pressure the Ukranian leader, but that isn’t quelling the movement toward impeachment in Congress — in fact, top House Democrats say it confirms the need for an inquiry.

Trump emphasized that there was “no pressure” and repeated stories that he and his private lawyer, Rudy Giuliani have told, insinuating that the younger Biden took part in corrupt activities in China and Ukraine. As explained here, Trump and Giuliani have not provided any evidence of wrongdoing.

When asked whether he had been pushed to investigate Hunter Biden, Zelenskiy said, “I’m sorry, but I don’t want to be involved in democratic, open elections in USA.” He described the phone call as “good” and “normal.” “We spoke about many things,” Zelenskiy said, adding later, “Nobody pushed me.”

Earlier Wednesday, House Speaker Nancy Pelosi said in a statement that “the transcript and the Justice Department’s acting in a rogue fashion in being complicit in the President’s lawlessness confirm the need for an impeachment inquiry.”

Pelosi added, “I respect the responsibility of the President to engage with foreign leaders as part of his job. It is not part of his job to use taxpayer money to shake down other countries for the benefit of his campaign.”

“The notes of the call reflect a conversation far more damning than I or many others had imagined,” he said Wednesday on Capitol Hill.

He said he didn’t want to “get ahead of ourselves” when asked if House would definitely vote on articles of impeachment. “It will be a decision for us once we conclude our investigative work whether to bring this or other matters in the form of articles to a vote, he said, “And we’ll cross that bridge when we come to it.”

“But no one should have any illusions,” he continued, “about the seriousness of what is already uncontested – and that is the president of the United States has betrayed his oath of office and sacrificed our national security in doing so.”

Sen. Mitt Romney, R-Utah, a frequent GOP critic of the president, called the memo “deeply troubling.” Speaking at a conference in Washington, Romney said: “If the president of the United States asks or presses the leader of a foreign country to carry out an investigation of a political nature, that’s troubling.”

Other Republicans, however, rallied to the president’s defense. Rep. Matt Gaetz, R-Fla., a fervent support of Trump’s, said the memo of the call showed that Pelosi “has been functionally ‘catfished’ into a politically fatal impeachment proceeding based on rumors, based on faulty evidence, and based on a blood lust for the President politically that does not serve our nation well.”

Sen. Lindsey Graham, R-S.C., called the rough transcript of the call “underwhelming.” Graham said “Impeachment over this? What a nothing (non-quid pro quo) burger. Democrats have lost their minds when it comes to President Trump.”

A dozen GOP members of the House and Senate were given an advance view of the memo at a White House meeting attended by White House General Counsel Pat Cipollone. One of those present, Sen. Ron Johnson, R-Wisc. said “We certainly saw no quid pro quo,” and, also employing the culinary metaphor, “It’s turning into a real nothing burger.”

But Democrats dispute that interpretation. In a joint statement, Schiff and other House committee chairmen including Jerrold Nadler, D-N.Y., Rep. Elijah E. Cummings, D-Md., and Rep. Eliot L. Engel, D-N.Y. said “no quid pro quo is required to betray our country. Trump asked a foreign government to interfere in our elections — that is betrayal enough. The corruption exists whether or not Trump threatened — explicitly or implicitly — that a lack of cooperation could result in withholding military aid.”

According to a memo of the call, Trump asked his Ukrainian counterpart for “a favor” to investigate former Vice President Joe Biden, who could be his 2020 presidential opponent.

Talking to reporters after the release of the memo, Trump denied pressuring Zelenskiy to look into Biden.

“There was no pressure,” Trump said. “The way you had it built up, that call, it was going to be the call from hell. It turned out to be a nothing call other than a lot of people said I never knew you could be so nice,” he said.

The July 25 call is the subject of a whistleblower complaint from within the intelligence community, but senior Justice Department officials said Wednesday that prosecutors “did not and could not make out a criminal campaign finance violation.”

The document released by the White House is labeled a “memorandum” that “is not a verbatim transcript of a discussion. The text in this document records the notes and recollections of Situation Room duty officers and NSC policy staff assigned to listen and memorialize the conversation in written form as the conversation takes place.”

Pelosi announced a formal impeachment inquiry on Tuesday, without having access to the transcript. But she said earlier in the day that evidence of a quid pro quo was not a “requirement.”

Pelosi called Trump’s actions a “betrayal of his oath of office, betrayal of our national security and betrayal of the integrity of our elections.”

“The president must be held accountable,” Pelosi said. “No one is above the law.”

She had previously resisted pressure from more liberal members of her caucus who have been pushing for impeachment.

Democratic committee chairs have already been launching investigations into the president ever since their party took control of the House of Representatives in January, and House Ways and Means Committee Chairman Richard Neal, D-Mass. — one of the six chairmen who will be part of the process — said Pelosi’s decision is “constructing an umbrella for the six chairmen to proceed now on the basis of a formal inquiry” and allowing Democrats to move forward “in a unified way.”

Rep. Jim McGovern, D-Mass., who chairs the House Rules Committee, said there aren’t plans for a full House vote right now, but that the swing in support — notably from more moderate members and ones in swing districts — shows that “the president has crossed a line. And you’re seeing a consensus growing that he’s unfit for office.”

“She cannot unilaterally decide we’re in an impeachment inquiry,” McCarthy said. “What she said today made no difference to what’s been going on. It’s no different than what Nadler’s been trying to do.”

Impeachment — the formal charging of wrongdoing against a president — could pass in a Democrat-controlled House. Just two presidents have been impeached in history: Andrew Johnson and Bill Clinton. Former President Richard Nixon was staring down an impeachment vote amid the Watergate scandal but resigned before formal impeachment articles were brought forward.

However, no president has ever been convicted in the Senate and subsequently removed from office. And such a feat would be tough in the GOP-controlled Senate, where 67 votes would be required.

But while most Senate Republicans have remained stalwart behind Trump, there were signs Tuesday that even they want answers, as they agreed by unanimous consent that the intelligence community whistleblower should be allowed to bring his or her information to the intelligence committee.

On Tuesday evening, the Office of the Director of National Intelligence said it is consulting with the executive branch on how to connect the whistleblower with congressional intelligence committees “in a manner consistent with appropriate security practices.”

Brett Neely contributed to this report.