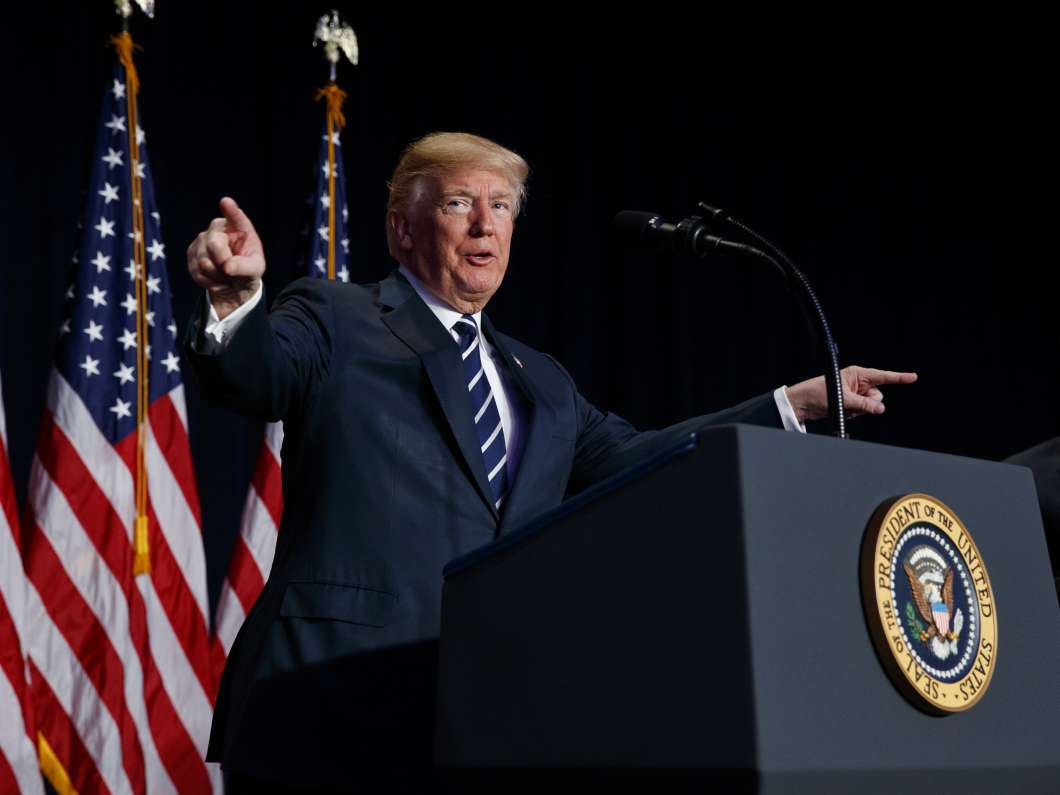 President Trump will finally be unveiling his long-awaited $1.5 trillion plan to repair and rebuild the nation’s crumbling highways, bridges, railroads, airports, seaports and water systems Monday. But, the proposal will not be one that offers large sums of federal funding to states for infrastructure needs, but it is instead a financing plan that shifts much of the funding burden onto the states and onto local governments.

Critics say that will lead to higher state and local taxes, and an increased reliance on user fees, such as tolls, water and sewer fees, transit fares and airline ticket taxes.

Senior White House officials who briefed reporters over the weekend say the plan is aimed at fixing the current system of funding infrastructure that they say is broken in two ways.

The first is that the country has been under-investing in infrastructure, leading a state of growing disrepair. The American Society of Civil Engineers gives the nation a grade of D+ for the condition of transit, highway, bridge, rail, water and other infrastructure, and says the country is in need of an investment of $2 trillion more than is currently budgeted.

The second way the White House says the system is broken is in the lengthy federal permitting process, which officials say can take five to 10 years or longer, driving up costs.

A program that would flip funding burden

Administration officials say the president’s plan addresses the funding shortfall by committing $200 billion in federal funding over 10 years to stimulate state and local spending and private investment. Half of the funding, $100 billion, will be used as incentives to entice cities, counties and states to raise at least 80 percent of the infrastructure costs themselves.

So, for example, if a state has a project or need identified and can come up with 80 or 90 percent of the funding for it through increased state or local taxes, like the gas tax, or with user fees like tolls, then under this plan, the federal government would kick in the rest.

Critics worry that would lead to only projects that could generate revenue, such as toll roads or bridges, getting funded.

That’s a radical departure from the way many projects are funded now. Funding for federal-aid highways, including interstates, is usually allocated in an 80-20 federal-state split. This program would flip that funding burden. Major mass transit projects are often funded on a 50-50 federal-local basis. Again, this plan puts a much greater burden on local taxpayers and users.

To address concerns that projects in rural areas don’t have the ability to generate much in user fees, the White House plan calls for spending $50 billion of the $200 billion on rural infrastructure needs. That funding would go to states in the form of block grants, giving governors and state legislatures the authority to figure out the best way to spend that money.

And $20 billion would go to federal loan programs that are aimed at attracting private investment in infrastructure, and into private activity bonds.

Projects with an eye to the future

The White House also wants to earmark $20 billion in funding for “transformative” projects, which a White House official says “have a vision towards the future.” These would be “projects that can lift the American spirit, that are the next-century-type of infrastructure as opposed to just rebuilding what we have currently.”

The remaining $10 billion would go into a capital financing fund, which the administration says would go toward funding federal government office building infrastructure.

The $200 billion in federal funding would not be new revenue but would come from cuts “in other areas of the federal budget,” some of which will be outlined in the president’s budget plan that will also be released Monday. That includes funding cuts to existing federal transit programs, the TIGER grant program “and things where the administration thinks that infrastructure funds haven’t been spent efficaciously,” said a senior administration official.

But the White House officials say this new infrastructure plan “is a program that sits on top of existing programs. So we’re not proposing eliminating the Highway Trust Fund, or changing the state revolving funds. So to the extent that communities are eligible for federal funds already, that eligibility remains.”

The president’s plan does not address a huge yearly shortfall in the federal Highway Trust Fund, which is funded by the federal gasoline tax. That tax of 18.4 cents a gallon for unleaded, 24.4 cents a gallon for diesel, hasn’t been raised in 25 years and because of improvements in fuel efficiency and inflation, it raises less money now than it did when last raised in 1993. So Congress is already using deficit spending to pay for some transportation infrastructure needs funded by existing programs.

In addition to the financing component of the plan, Trump wants to significantly streamline the federal environmental review and permitting process for infrastructure construction projects, which they say can often involve several different federal agencies that can drag the process out. The president’s plan will call for the creation of “One Agency, One Decision” type of process that would put one lead federal agency in charge of completing an environmental review within 21 months.

President Trump will outline some of these principles in a meeting with mayors and other state and local leaders at the White House Monday. Trump will work with Congress to make changes, if needed. The infrastructure spending plan would need 60 votes to pass in the Senate so it will need democratic support, but the White House officials say this is one issue on which there should be room to compromise, because they say the president’s infrastructure plan is in line with priorities and objectives outlined by members of both parties in Congress, even if not in the way it would be funded.

“This is in no way, shape or form … a take it or leave it proposal,” said one senior administration official. “This is the start of a negotiation.”

“The president has said he is open to new sources of funding,” the White House aide said. “We want it to be bipartisan.”