Trump To Davos: ‘America Is Open For Business’ 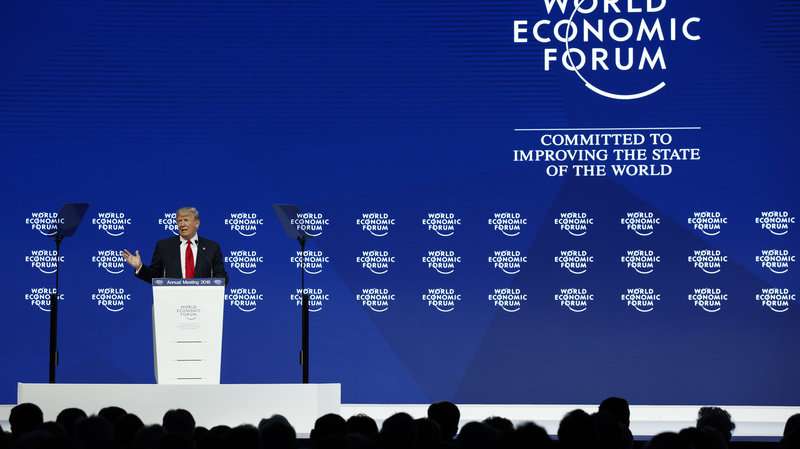 “America is open for business and we are competitive once again,” Trump said.

He also declared that “America First does not mean America alone.”

“We will enforce our trade laws and restore integrity to the trading system,” he said. “Only by insisting on fair and reciprocal trade can we create a system that works not just for the United States but for all nations.”

Aides said ahead of the president’s speech that it would be a kind of pitch for the United States, where Trump is working to foster a new business climate of low taxes and limited regulations.

“President Trump’s economic agenda has unleashed the U.S. economy, and we are growing,” National Economic Council Director Gary Cohn told reporters this week in a preview of the speech. “His policies have led to a rising stock market, low unemployment and strong GDP growth. The administration’s commitment to deregulation, and our passing of comprehensive tax reform, have helped level the playing field for our businesses and our workers”

Trump is the first sitting U.S. president to attend the Davos summit since Bill Clinton went in 2000. The glitzy annual gathering at a Swiss ski resort attracts wealthy businesspeople from around the world. Trump wants more of them to put their money to work in the United States.

“We want the world to invest in America and to create jobs for hardworking Americans,” Cohn said.

Trump is also expected to discuss what he sees as unfair trading practices by other countries. Earlier this week, the administration ordered stiff new tariffs on imported washing machines and solar panels — and the president warned of more protectionist actions to come.

In one of his first actions as president, Trump withdrew the U.S. from a 12-nation Asia Pacific trade pact negotiated under the Obama administration. The other 11 countries continued to move forward with the deal. Canadian Prime Minister Justin Trudeau used his appearance at Davos this week to announce the remaining countries had reached an agreement — without the United States.

Trump’s comments follow a report from The New York Times that he wanted to fire special counsel Robert Mueller, who is investigating Russian interference in the 2016 presidential election and possible ties to the Trump campaign. Asked about the report on Friday, Trump dismissed it as “fake news.”