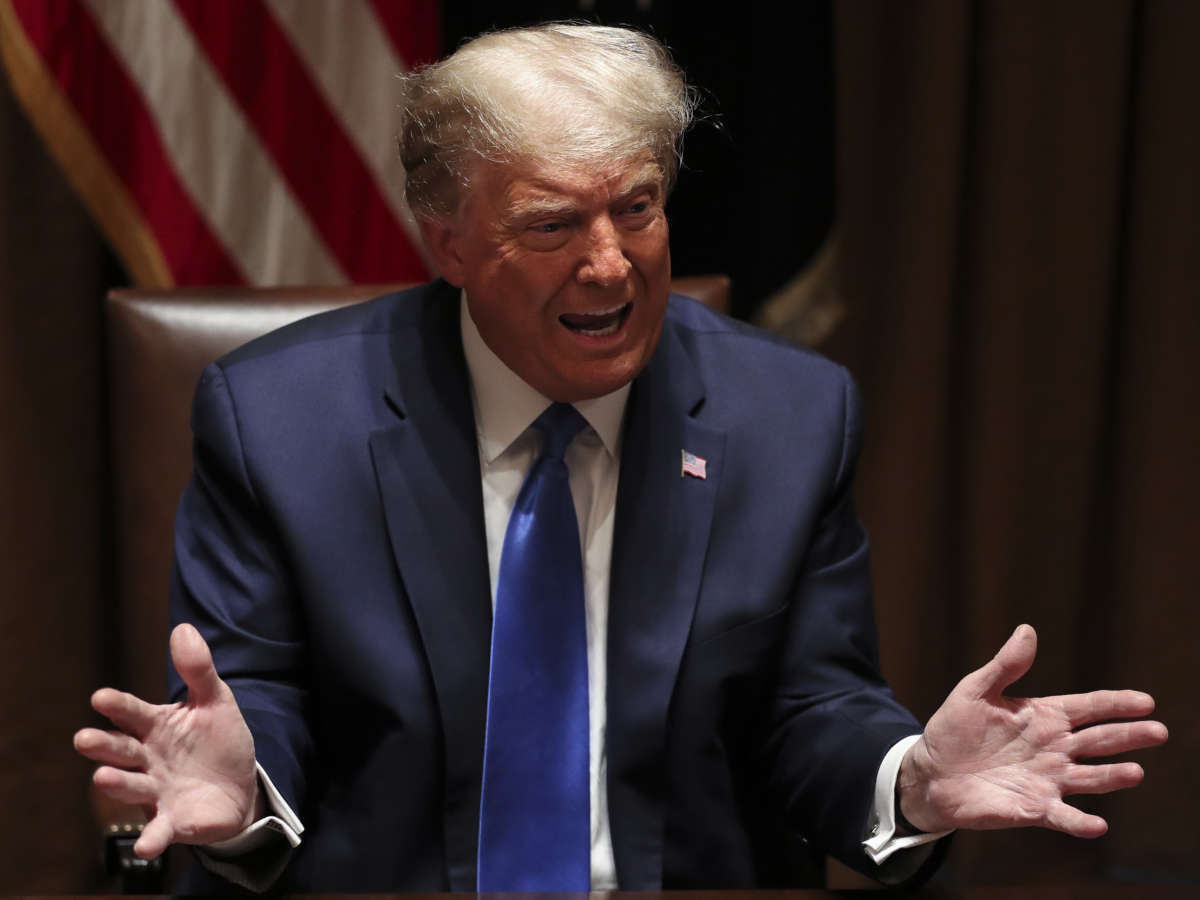 Facebook has extended former President Donald Trump’s suspension for two years and says it will only reinstate him “if the risk to public safety has receded.”

The decision comes after Facebook’s Oversight Board told the company it was wrong to impose an indefinite ban on Trump after the Jan. 6 insurrection at the U.S. Capitol.

Facebook says it is setting new rules for public figures in times of civil unrest and violence, “to be applied in exceptional cases such as this.” Trump has received the maximum penalty under those rules, “given the gravity of the circumstances” leading to his suspension. Because the company took his Facebook and Instagram accounts down on Jan. 7, they will remain suspended until at least Jan. 7, 2023.

At that point, Facebook will consult experts and “evaluate external factors, including instances of violence, restrictions on peaceful assembly and other markers of civil unrest,” said Nick Clegg, vice president of global affairs, in a statement.

“If we determine that there is still a serious risk to public safety, we will extend the restriction for a set period of time and continue to re-evaluate until that risk has receded,” Clegg said.

When Trump is allowed to return, he will be subject to “a strict set of rapidly escalating sanctions,” up to a permanent ban, that will kick in if he continues to break Facebook’s rules.

Facebook’s decision “is an insult to the record-setting 75M people, plus many others, who voted for us,” Trump said in an emailed statement, misstating the number of votes he received in the 2020 presidential election. (It was just over 74 million votes.) He also continued his baseless attacks on the legitimacy of the election.

“They shouldn’t be allowed to get away with this censoring and silencing, and ultimately, we will win. Our Country can’t take this abuse anymore!” he said.

He later followed up with a statement hinting he would run for the presidency again and directing ire at Facebook’s CEO: “Next time I’m in the White House there will be no more dinners, at his request, with Mark Zuckerberg and his wife. It will be all business!”

Yet Facebook’s decision was derided by left-leaning and civil rights groups who hoped it would permanently ban Trump.

“This decision only goes to underline the enormous, unchecked power of Facebook and its repeated failure to police its platform,” a coalition calling itself the Real Facebook Oversight Board, a mocking reference to the panel of outside legal and human rights experts the company convened to review its most difficult content decisions, said in a statement. “Donald Trump and his allies used Facebook to incite an insurrection and attempted coup of the United States Government. The punishment: Back on Facebook just in time for Trump 2024, with no explanation at all why a two-year ban, or what the criteria is for determining his status when the ban expires.”

The company’s decision raises more questions than it answers, the group said, including how Facebook will treat other controversial political leaders who have flouted its rules and whether the company would be re-examining the actions it’s taken against other users prior to this policy shift.

Nonetheless, the new rules being applied to Trump mark a sharp break with the hands-off approach to political speech that Facebook has taken for years.

The social network has largely exempted politicians from its policies on what speech is allowed on its platform, with Zuckerberg arguing that political speech is already highly scrutinized. That stance has fueled criticism from civil rights groups, Democratic lawmakers, political activists and even the company’s own employees.

Now, Facebook is overhauling a key part of its approach and will no longer consider politicians’ posts “newsworthy” by default. That means if politicians break the company’s rules prohibiting harmful speech, they will face the same consequences as any other user.

“We will simply apply our newsworthiness balancing test in the same way to all content, measuring whether the public interest value of the content outweighs the potential risk of harm by leaving it up,” Clegg said.

That’s a reversal of how Facebook has treated politicians since 2019, when Clegg said the company believed political speech was “newsworthy content that should, as a general rule, be seen and heard.”

However, Facebook is not eliminating the exemption entirely. It said if it decides a politician’s post breaks the rules but is newsworthy, it will be left up on the site — but the company will disclose when it does so.

The company is also leaving another controversial policy in place: it will continue to exempt politicians’ posts and paid ads from fact-checking. Critics say that gives political leaders around the world a free pass to lie and whip up partisan divisions.

The policy changes were announced Friday in response to recommendations from Facebook’s Oversight Board.

Last month, the board upheld Facebook’s decision to suspend Trump, finding he had broken its policies against praising violence, but said the company needed to set clear rules for high-profile users.

The board’s criticisms of Facebook were scathing. It slammed the company, saying “the same rules should apply to all users of the platform.” It said Facebook should act more quickly when politicians, celebrities and other people with big audiences violate its policies, because their influence can cause outsize harm.

The board took particular aim at the “newsworthiness” exemption, put in place in 2016. It said the company should do a better job of explaining the policy and when it’s applied to “influential users,” including politicians.

Facebook said on Friday it has applied this policy to Trump’s account once: on an August 2019 video from a rally, when Trump singled out a member of the crowd.

In its response to the board’s recommendations, Facebook said it would be more clear about how it enforces rules for all users. It’s making public its system of “strikes” and penalties for accounts that break the rules, and explaining how it reviews posts by high-profile “public figures.”

It also laid out a new policy for how it will handle public figures’ accounts “during civil unrest” — the rules it is applying to Trump.

Because those accounts can have outsized impact, if they break the rules “in ways that incite or celebrate ongoing violent disorder or civil unrest,” they face suspensions ranging from one month to two years, compared with the standard penalty of up to 30 days.

In addition, once they’re allowed back on Facebook, these users will face “heightened penalties” including permanent bans.

Facebook said it was “committed to fully implementing” most of the board’s recommendations.

But it did not commit to a suggestion that it conduct a review of its role in contributing to the false election fraud narrative that culminated in the events of Jan. 6, instead saying it is cooperating with law enforcement and is partnering with outside researchers to study the effect its platforms have on elections.