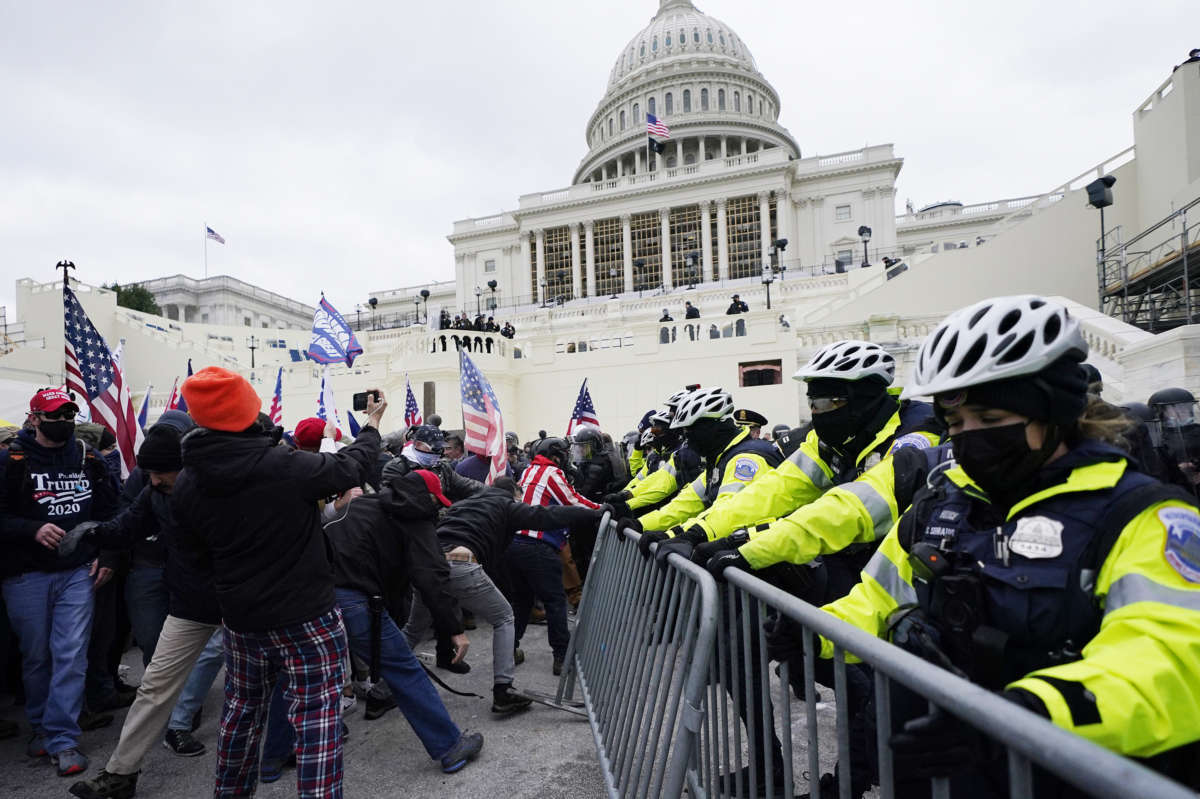 Trump supporters try to break through a police barrier at the Capitol in Washington, D.C., on Wednesday. As Congress prepares to affirm President-elect Joe Biden's victory, thousands of people have gathered to show their support for President Trump.
Image credit: John Minchillo

Thousands of Trump supporters stormed the U.S. Capitol on Wednesday, prompting the House and Senate to abruptly take a recess as the U.S. Capitol Police locked down the building. D.C. Mayor Muriel Bowser ordered a citywide curfew from 6 p.m. on Wednesday until 6 a.m. on Thursday.

Protesters had amassed in Washington, D.C., to reject the results of the Nov. 3 election, cheering as President Trump himself addressed the crowd and urged them to protest what he falsely claims was a rigged election before marching to the Capitol and pushing past security barriers there.

The protests are timed to coincide with Congress’ certification of the Electoral College votes and aim to pressure Republican lawmakers into supporting Trump’s effort to overturn President-elect Joe Biden’s electoral victory.

Trump supporters, many wearing red MAGA hats but no face masks, gathered at The Ellipse where the president addressed them midday Wednesday. The crowd faced the White House and a stage was flanked by two big “Save America March” signs swayed to the beat of the Village People song “Macho Man” and Michael Jackson’s “Billy Jean.”

After the speech, they pushed past barriers onto the Capitol grounds, while yelling, “Whose Capitol? Our Capitol,” NPR’s Hannah Allam reports. Police and other security put up more barriers and security layers as protesters breached the initial security layer. Protesters climbed the scaffolding, looking for any way in to get to the Capitol, Allam said, and armed police rushed in tackling them.

As thousands of Trump supporters climbed up the side of the Capitol to get inside, bursts of what appeared to be gas cannisters are being fired though it was not clear who was firing them.

Earlier the mood was celebratory though the rhetoric was angry with speaker after speaker telling the crowd, “We can’t back down. This is just the beginning.” The president’s son Donald Trump Jr. greeted the crowd with: “Hello, Patriots!”

Outside the U.S. Capitol, several dozen Trump supporters waved flags and prayed for “angel armies” to intervene, calling on lawmakers inside to “reject” the election.

A huge contingent of Proud Boys marched in, some chanting “storm the Capitol” and “1776!” and massed for the Capitol building.

For many in the crowd, it was inconceivable that Congress would certify the November vote, as it’s expected to. Echoing the president’s words, they pledged to fight, some calling for a rebellion and others vowing to refocus energy on the 2024 race. And they made it clear that Republicans who didn’t back Trump would pay a price.

“We’re not moving on,” said Lawrence Ligas, a 55-year-old from Chicago who said he used to be a Democrat before Trump “earned” his vote.

“We are not Republicans. We are the MAGA party. We are patriots,” he said.

Nearby, 28-year-old Lisa Hayes was attracting a crowd with her outfit: a white tulle ballgown covered with mail-in ballots marked “STOLEN.”

As she was explaining that the importance of election integrity brought her to Washington, a bystander interrupted and gestured toward her thin outfit in 43-degree weather.

“You’re not freezing?” he asked Hayes.

“My blood is boiling, so I’m fine!” she replied.

Mayor Bowser said Wednesday that her city was ready to keep protests peaceful and protesters safe, even though Trump tweeted that Wednesday’s protests will be “wild.”

“I think it’s unfortunate that the president himself has incited violence,” said the mayor.

Police stablished a bigger “traffic box” a perimeter where vehicle traffic is restricted, she said, and, “we have our entire police force activated” along with National Guard and with help from other nearby jurisdictions, the mayor said.

“All of that is very expensive,” said Bowser, “we incur overtime costs when we do that.”

The nation’s capital is a cradle of protests and Bowser says it’s the city’s responsibility to provide support for the movements of the president and the many demonstrations taking place in the Trump administration. The federal government hasn’t paid its public safety bill in two years, but Bowser says she’s confident that D.C. will be reimbursed.

“The federal government owes us about $100 million,” she said. “We will continue to work with the Congress to make sure we’re made whole for our emergency fund.”

Bowser also praised D.C. police for the arrest earlier this week of Henry “Enrique” Tarrio, leader of the far-right group Proud Boys. Tarrio has been barred from the District and is facing misdemeanor destruction of property charges and two felony counts of possession of high capacity firearm magazines.

According to court documents obtained by NPR, the magazines are AR-15/M4 compatible with a capacity of 30 rounds each, and every magazine is labeled with the Proud Boys insignia.

“I sell on my site,” Tarrio told the officers who found the magazines in his bookbag. “I had a customer that bought those two mags, and they got returned ’cause it was a wrong address. And I contacted him, and he’s like, ‘I’m going to be in D.C.,’ so I’m like, ‘OK, I’ll take ’em to you.’ ”

Proud Boys members typically dress in black and yellow, but are planning to wear all black, to mimic Antifa, a loose affiliation of far-left activists. The two groups have violently clashed in the past.

The U.S. Park Police confirmed that permits for Wednesday’s rally at The Ellipse had all been approved, including an amendment from 5,000 people to 30,000 people.

Every city police officer is on duty, and the city has also mobilized 300 members of its National Guard. The D.C. Metropolitan Police Department issued a traffic advisory that includes parking restrictions and street closures around downtown, a larger perimeter than in previous pro-Trump protests.

“My level of anxiety is high,” D.C. Attorney General Karl Racine said in an interview with CBS News. “My preparation is even more intense than that.”

Racine’s office is working with the FBI and others, but his main concern is that the Proud Boys will “pick fights, create damage and then act in a very threatening way.”

Oren Segal, vice president at the Center on Extremism at the Anti-Defamation League, has been working and advising the D.C. government in preparation for Wednesday’s protests.

“The stakes are higher today,” he said.

Segal says that Trump rallies appeal not only to extremists seeking to leverage a crisis, but also to people who show up merely in support of Trump, like the Muellers from Texas.

The concern is that nonviolent Trump supporters at these protests will “get wrapped up in the tactics and violence of the extreme fringes” because they are at a protest at the same time, he said.

Segal anticipates some disruption during the protests, but he’s optimistic.

“Some individuals will seek to gain attention to themselves and their cause by engaging in violence,” he said. “[But] even at this sort of last hour, I remain hopeful that most of the people who show up will be peaceful.”