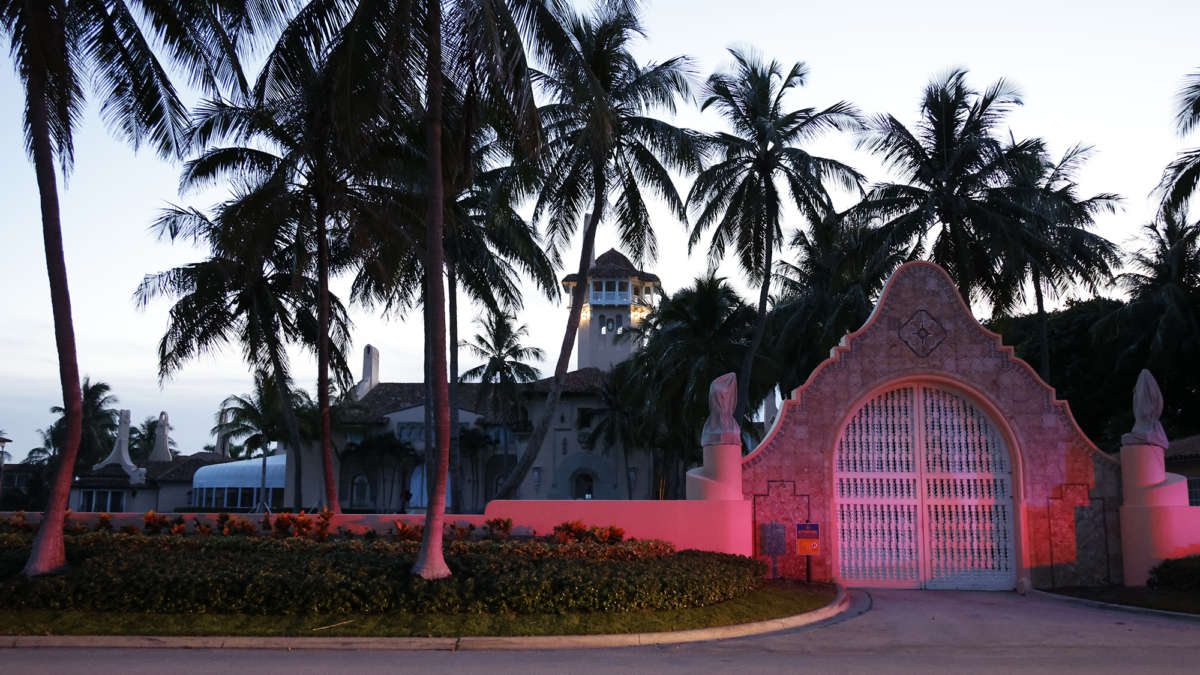 The entrance to former President Donald Trump's Mar-a-Lago estate is shown, Monday, Aug. 8, 2022, in Palm Beach, Fla. Trump said in a lengthy statement that the FBI was conducting a search of his Mar-a-Lago estate and asserted that agents had broken open a safe.
Image credit: Terry Renna

Former President Donald Trump said on Monday that FBI agents had searched his Mar-a-Lago club and residence in Palm Beach, Fla., and opened his safe.

The FBI and Department of Justice declined to comment, although Eric Trump said Monday night that he was told the raid was related to the possible mishandling of government secrets the Justice Department is known to be investigating after the National Archives retrieved White House records from Mar-a-Lago.

“The purpose of the raid was, from what they said, was because the National Archives wanted to corroborate whether or not Donald Trump had any documents in his possession,” the former president’s son told Fox News. “And my father has worked so collaboratively with them for months. In fact, the lawyer that’s been working on this was totally shocked. He goes, ‘I have such an amazing relationship with these people and all of a sudden, on no notice, they send 20 cars and 30 agents?'”

The younger Trump said he got a call about the raid being executed on Monday morning and informed his father.

The search, which would have required a court order from a federal judge, signals the president is under greater scrutiny from federal investigators than was previously known.

In a statement put out by his political action committee, Trump said Mar-a-Lago was “under siege, raided, and occupied by a large group of FBI agents.”

“After working and cooperating with the relevant government agencies, this unannounced raid on my home was not necessary or appropriate,” the statement said.

Trump went on to blame Democrats who don’t want him to run for president in 2024 for the incident, and said the same people also want to stop Republicans from winning in the midterm elections.

While there is no indication that prosecutors are on the verge of charging Trump, or that he will ultimately be charged, the search marks a significant step. In order to get a warrant, investigators would have had to demonstrate to a judge that there was probable cause to believe that a crime had been committed and that evidence of the crime was at Mar-a-Lago.

A search of a former president’s home would likely need to be approved at the highest levels of the Justice Department. A department spokeswoman declined to comment whether Attorney General Merrick Garland had signed off on the Mar-a-Lago search.

A White House official said they did not receive notice of the search, and referred questions to the Justice Department.

Earlier this year, the National Archives and Records Administration said it had recovered 15 boxes of White House records and other items from Trump’s Florida club, sparking a Justice Department investigation.

Trump’s announcement of the raid sparked a firestorm on the right, with Republicans accusing Democrats of weaponizing the federal bureaucracy.

“The Department of Justice has reached an intolerable state of weaponized politicization,” House Minority Leader Kevin McCarthy, R-Calif., said in a statement. He promised oversight of the department, should Republicans win the House in November, and warned Garland, “preserve your documents and clear your calendar.”

Trump’s 2024 plans may weigh on prosecutors

Monday’s action also comes as the Justice Department was ramping up its investigations into Trump’s attempts to overturn the 2020 presidential election — though there have not been reports of an investigation into Trump himself.

As Trump teases another run at the White House, former federal prosecutor Brian Jacobs told NPR that another Trump candidacy could weigh on DOJ prosecutors, but wouldn’t impact any potential investigations.

“I think prosecutors in the Department of Justice all know that they are not allowed to select the timing of investigative steps or criminal charges for the purpose of affecting any election,” Jacobs said.

Trump was not in Florida on Monday. While Mar-a-Lago is his official residence, it’s a seasonal club and the former president spends the summer months primarily up north, often at his golf club in Bedminster, N.J. He was seen outside Trump Tower in New York City on Monday evening.