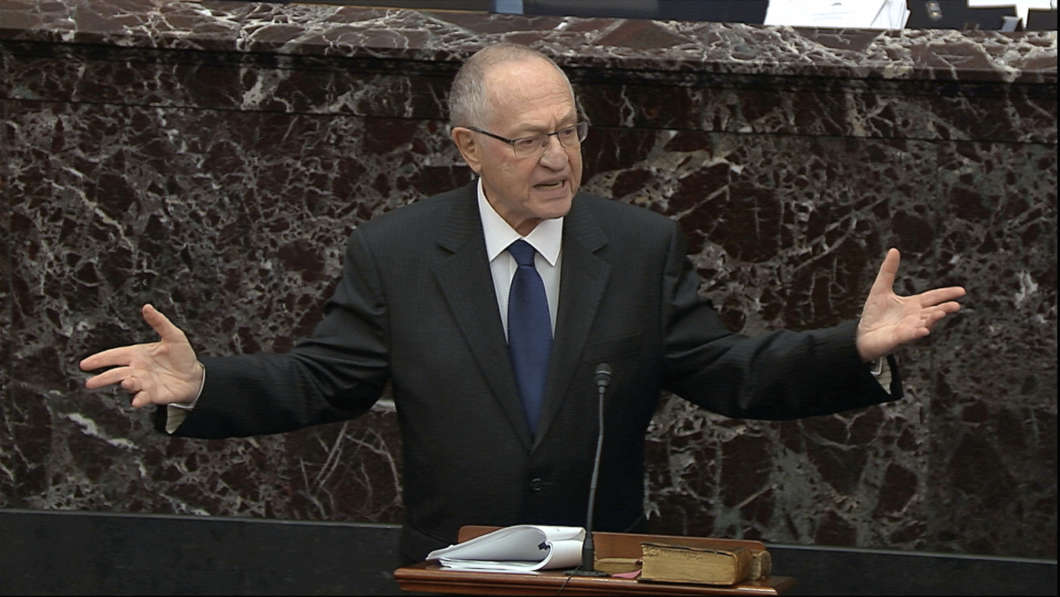 Alan Dershowitz, an attorney for President Trump, speaks during the impeachment trial against Trump in the Senate on Monday.

Shortly before winding down Monday night’s arguments in the Senate impeachment trial of President Trump, defense lawyer Alan Dershowitz addressed the elephant in the room: whether potential testimony from former national security adviser John Bolton would alter the course of the proceeding.

Dershowitz was the first member of the president’s defense team to directly acknowledge how recent Bolton news had consumed Washington, as speculation raged over the Senate possibly calling him as a witness.

Bolton’s possible first-hand account of the events at the heart of the impeachment trial? Not necessary, argued Dershowitz.

“Nothing in the Bolton revelations, even if true, would rise to the level of an abuse of power or an impeachable offense,” he said.

Democrats need to convince at least four Republicans to defect from their party’s leadership in order to support a subpoena of Bolton, a threshold that Sen. Mitt Romney, R-Utah, said on Monday appeared “increasingly likely.”

That assessment comes in light of Bolton reportedly writing in his forthcoming book that Trump directly linked the freezing of $391 million in security assistance to Ukraine launching investigations into Trump’s main political rival, Joe Biden, and his son, Hunter Biden.

Also on Monday, Sen. Angus King, I-Maine, told NPR that he too believes the Senate is now inching closer to having enough votes to bring Bolton into the chamber for live testimony.

“I’m already hearing a number of Republicans who are moving toward voting to at least hear from John Bolton, if not other witnesses,” he said. “I think there’ll be more,” said King, referring to the four GOP votes Democrats need to call Bolton. “My bold prediction will be five or 10.”

On Tuesday, the Trump team will carry out its final day of the president’s defense.

The trial will resume at 1 p.m. ET. Watch live here when it begins.

The House impeached Trump for abuse of power for asking Ukraine to announce investigations into his political rivals, allegedly using $391 million in vital security assistance to pressure the country into launching the probes. House Democrats also impeached Trump for obstruction of Congress for the White House’s refusal to cooperate with impeachment investigators.

But on Monday, Trump’s defense team offered vastly different version of events, arguing that the president’s freezing of military aid was done out of a legitimate concern over corruption in Ukraine, pointing out that the congressionally approved funding was eventually released.

Eric Herschmann, another Trump defense lawyer, maintained that the hold-up in military aid was not as consequential as Democrats have portrayed it to be.

“It is absurd on its face. Not one American life was in jeopardy or lost by the short delay, and they know it,” Herschmann said.

Ken Starr, who is defending Trump and who led the investigation into then-President Bill Clinton that triggered Clinton’s impeachment, made the case that Trump’s impeachment, the third impeachment trial in American history, shows that “we are living in what aptly can be described as the age of impeachment,” adding the process is “filled with acrimony and divides the country like nothing else.”

The defense team also used Monday to attack the Biden family, playing a television interview with Joe Biden’s son, Hunter, answering questions about his time as a board member of the energy company Burisma when his father was vice president.

Neither Joe Biden nor his son have been accused of any wrongdoing connected to Ukraine and Burisma.

Yet Bondi cited news outlets that have covered the Bidens and the energy company before saying: “they all thought there was cause to raise the issue about the Bidens and Burisma.”

Added Bondi: “The House managers might say, without evidence, that everything we just said has been debunked, that the evidence points entirely and unequivocally in the other direction. That is a distraction,” Bondi said. “They don’t believe that there was any concern to raise here,” she said. “And all we’re saying is that there was a basis to talk about this, to raise this issue.”

Andrew Bates, a spokesman for Joe Biden, characterized Bondi’s presentation as a “conspiracy theory” that has been “conclusively refuted.”

“Joe Biden was instrumental to a bipartisan and international anti-corruption victory. It’s no surprise that such a thing is anathema to President Trump,” Bates said in a statement.

Meanwhile in the Senate, lawmakers struggled on Monday to push through the daylong presentations by Trump’s legal team.

Senators appeared more worn down than last week, giving way to yawns, or strolls into the cloakroom for extended breaks.

Once Trump’s legal team rests, the trial will then move to the questions phase in which senators submit in writing questions to the prosecution or defense that the Chief Justice John Robert will read aloud.

After the questions wrap up, senators will then take up whether to call witnesses.

Rep. Adam Schiff, D-Calif., the lead Trump prosecutor, has said that the White House’s attempt to block witnesses from the impeachment process is proof of a cover-up. On Monday, Schiff added to those contentions, saying on CNN that lawmakers interested in fully assessing the impeachment charges should want to hear Bolton’s side of the story.

“I don’t know how you can explain that you wanted a search for the truth in this trial and say you don’t want to hear from a witness who had a direct conversation about the central allegation in the articles of impeachment,” Schiff said.