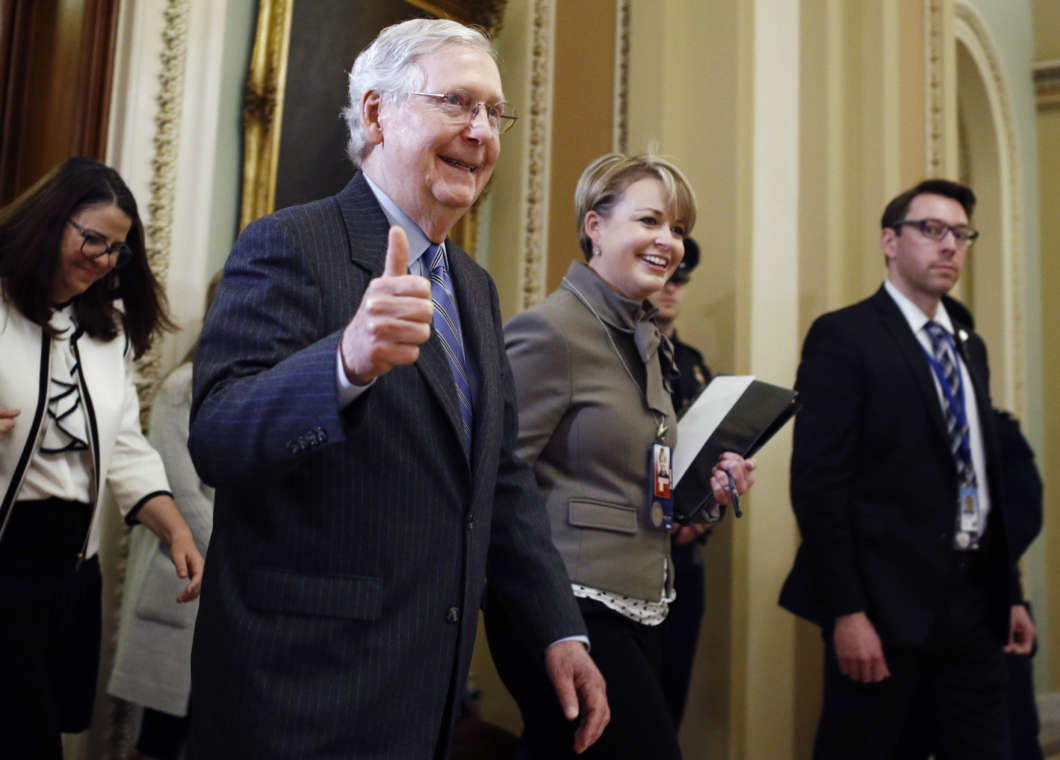 Senate Majority Leader Mitch McConnell, R-Ky., gives a thumbs up as he leaves the Senate chamber during the impeachment trial of President Trump on Friday.
Image credit: Steve Helber

Closing arguments in the Senate impeachment trial of President Trump kicked off on Monday.

The House managers prosecuting Trump and the president’s defense team will each get two hours to make their case one final time. Watch the proceedings live.

On Sunday, Trump repeated his oft-stated position on the abuse of power and obstruction of Congress impeachment charges pending against him in the Senate: that he is the victim of a politically motivated attempt to discredit his presidency in order to boot him from the White House.

“It’s been a very, very unfair process,” Trump told Sean Hannity of Fox News in a pre-Super Bowl interview. “It should never happen to another president.”

After Monday’s session, the Senate will adjourn until 4 p.m. ET Wednesday, when senators are set to take a formal vote on the articles of impeachment. Trump’s acquittal is nearly guaranteed, as 20 Republicans would have to join the Democratic caucus to vote against the president.

The lawyers’ final pitches to senators on Monday follow a vote Friday to block witnesses and the introduction of new evidence into the trial.

News reports about bombshell allegations contained in a manuscript of former national security adviser John Bolton’s forthcoming book renewed hope for Democrats that they could recruit the four Republicans needed to bring witnesses and evidence into the trial. But the effort fell short by two Republican votes.

The lead impeachment manager, Rep. Adam Schiff, D-Calif., said Sunday that Democrats are considering issuing a subpoena to sit Bolton down in front of investigators in the House, where the impeachment inquiry is still open.

“Whether it’s in testimony before the House, or it’s in his book, or it’s in one form or another, the truth will come out,” Schiff said on CBS’s Face the Nation.

Prior to the House impeaching Trump, Democrats requested that Bolton appear before House lawmakers, but he refused, citing the White House’s orders that former officials close to Trump not cooperate with impeachment investigators. House lawmakers said they did not subpoena Bolton then in order to avoid a drawn-out court battle.