Trump: I’d Love For U.S. To Be ‘Opened Up By Easter’ Amid Pandemic Response 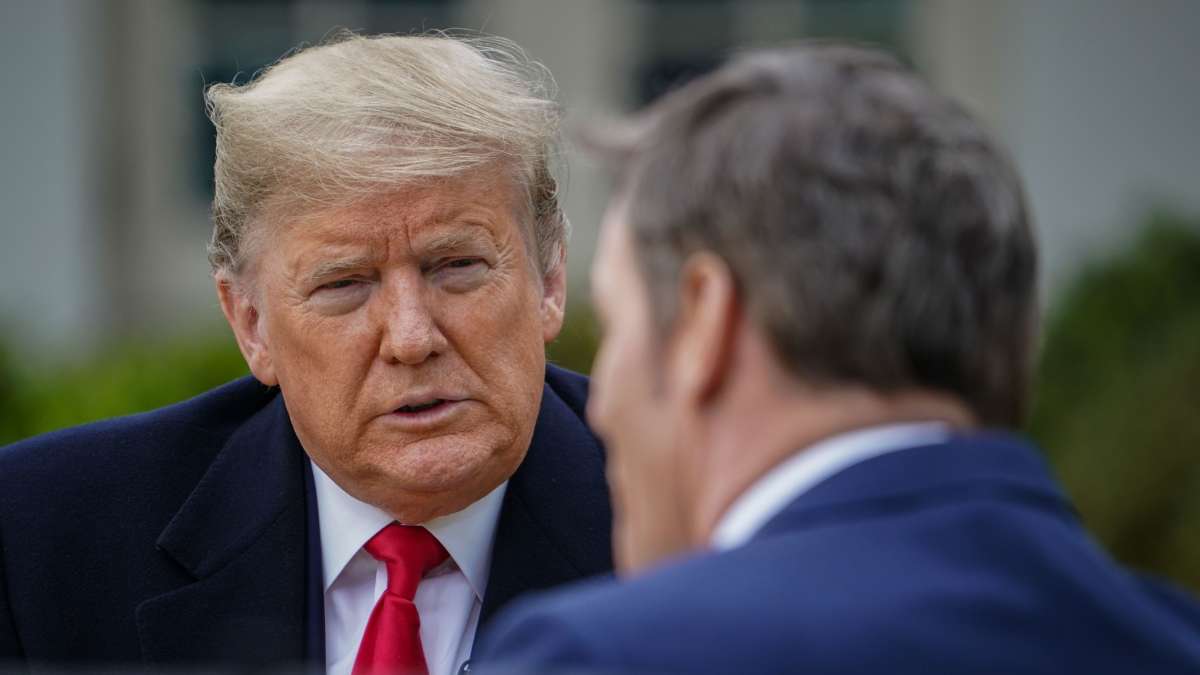 President Trump hopes the United States can begin to get back to normal by the middle of next month, he said on a Fox News TV special on Tuesday.

“I would love to have the country opened up and just raring to go by Easter,” Trump told host Bill Hemmer in a show aired from the White House.

That’s April 12, within the timeline of “weeks” that Trump said he hopes is appropriate for curtailing the social distancing, isolation and other measures that officials have outlined to slow the spread of the coronavirus — but have also paralyzed the economy.

The rate of infections inside the U.S. has not stopped climbing — by Tuesday afternoon, there were more than 50,000 confirmed cases nationwide, according to researchers at Johns Hopkins University — and Trump’s April 12 target date is far sooner than other milestones set by officials across the country.

The White House’s coronavirus task force is scheduled to hold a briefing Tuesday around 5:30 p.m. ET. You can watch it live here:

The District of Columbia has closed its schools through April 24, for example; schools in Virginia won’t reconvene at all for the rest of this academic year.

Trump and Vice President Pence have talked up what they call the need for the U.S. to reset in stride, as military commanders might say — to continue some mitigation measures to constrain the pandemic but also permit some businesses to reopen.

“You can destroy a country this way by closing it down,” Trump said in the Fox special on Tuesday.

Many public health experts have expressed alarm about Trump’s suggestion that some parts of the country could soon ease some measures being taken to slow the spread of the virus.

The president and vice president framed one focus for the upcoming months on the most vulnerable populations, particularly older people with preexisting medical conditions.

Under this construction, life might shift away from keeping everyone apart to permitting more people to leave their homes and return to work. For the time being, Trump said Americans might still be discouraged from shaking hands and other such activity. “We can socially distance ourselves and go to work,” he said.

At the same time, as Pence described it, the national response would shift from one based on dispersing everyone to defending the elderly, although it isn’t clear whether public health officials agree or what new steps that might require.

The United States is nine days into a 15-day period of White House guidelines to “slow the spread” of the virus. When that ends, the administration will begin to assess whether to recommend more isolation and mitigation — or to permit some people to work or travel, as Trump has suggested.

It isn’t clear what metrics the White House might use when making that assessment, and the challenge of moving out of this isolation phase is compounded by the unequal affliction of the coronavirus across the country.

Washington state, California and New York state have been hit particularly hard but aren’t moving through their rates of infection at the same rate.

The White House has acknowledged that many of the important upcoming decisions about the pandemic belong to governors or local officials. Trump and Pence have come under pressure, however, to at least give broad expectations about when life can start to get back to normal.

In recent days, the president has taken onboard the idea that too much isolation and too much mitigation could be too ruinous for the economy, saying the “cure” can’t be worse than the disease.

“We have a pent-up energy that’s going to be unbelievable,” Trump said.

The president said he wanted to be mindful about the need to balance public health interests with the desire to reopen America for business, but he also suggested that public health officials might be too conservative.

“I’m sure we have doctors who say, ‘Let’s keep it closed for two years,’ ” Trump said. “No, we’ve got to get it open, our people want it open and that’s the way this country was built.”

Trump appeared in a separate interview on Fox on Tuesday and described a scene he’d imagined in which millions of worshipers were able to attend Easter services next month.

“Wouldn’t it be great to have all of the churches full?” Trump said, noting churches had been forced to move online due to social distancing guidelines. “Online is never going to be like being there,” he said. “You’re going to have packed churches all over our country. I think it would be a beautiful time.”

Call for consensus on legislation

Trump and Pence called for Congress to complete work on the relief and stimulus legislation that has been under negotiation for the past several days, but they also faulted Democrats for what they called opportunism about the bill.

“All of a sudden they started to throw the Green New Deal stuff in — ‘we want green energy,’ ” Trump said.

The president dislikes wind turbines after a dispute over the prospect that they might be installed near a golf course he owns in Scotland, and Trump suggested on Tuesday that Democratic support for wind energy might have caused him to reject some of the proposals in the bill.

“They had things in there that were terrible, windmills all over the place … windmills that kill the birds and ruin the real estate, right?” Trump said.

Washington must focus on “the workers,” the president said. “Workers first.”

Trump said in his second interview on Fox that he wasn’t concerned about the costs associated with what could be a $2 trillion stimulus package because he considered that to be an investment.

“It’s not really spending, because a lot of it is helping companies” through loans, he said. “It’s loaded to save corporations,” he said, specifically mentioning Boeing.

“They’re going to pay that back,” he said, noting that some may pay by giving the government some equity, and also by repaying with interest.

“We’re going to get stock for the taxpayers of our country,” Trump said.