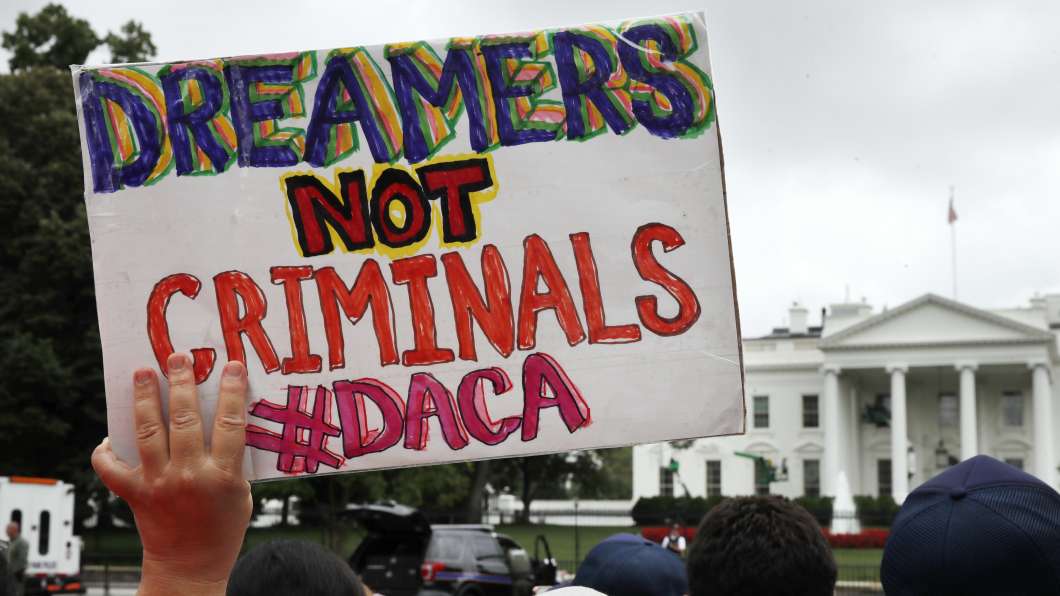 A woman holds up a sign in support of the Obama administration program known as Deferred Action for Childhood Arrivals, or DACA, during a rally at the White House on Aug. 15.
Image credit: Jacquelyn Martin

The Trump administration Tuesday formally announced it will end the Deferred Action for Childhood Arrivals program — also called DACA — putting an expiration date on the legal protections granted to roughly 800,000 people known as “DREAMers,” who entered the country illegally as children.

President Trump issued a statement, saying, “I do not favor punishing children, most of whom are now adults, for the actions of their parents. But we must also recognize that we are nation of opportunity because we are a nation of laws.”

He also said he looks forward to working with Republicans and Democrats in Congress to address immigration issues “in a manner that puts the hardworking citizens of our country first.”

Attorney General Jeff Sessions, a longtime opponent of the policy, made the formal announcement Tuesday morning. He called DACA “unilateral executive amnesty” and said the Obama administration “deliberately sought to achieve what the legislative branch specifically refused to authorize on multiple occasions. Such an open-ended circumvention of immigration laws was an unconstitutional exercise of authority by the executive branch.” He said DACA “denied jobs to hundreds of thousands of Americans by allowing those same illegal aliens to take those jobs.”

Sessions added, “We cannot admit everyone who would like to come here. It’s just that simple.”

In a statement, Duke said no current beneficiaries will be affected before March 5 of next year. But “No new initial requests or associated applications filed after today will be acted on,” she said.

Duke said the administration’s decision to terminate DACA “was not taken lightly. The Department of Justice has carefully evaluated the program’s constitutionality and determined it conflicts with our existing immigration laws.”

Trump signaled the decision earlier on Tuesday, tweeting, “Congress, get ready to do your job – DACA.”

House Speaker Paul Ryan, R-Wis., responded to the announcement in a statement saying, “It is my hope that the House and Senate, with the president’s leadership, will be able to find consensus on a permanent legislative solution that includes ensuring that those who have done nothing wrong can still contribute as a valued part of this great country.”

Senate Democratic leader Chuck Schumer of New York called the administration’s decision “heartless.” He said Democrats “will do everything we can to prevent President Trump’s terribly wrong order from becoming reality.”

DACA allowed individuals who were brought to the U.S. as children or teens before mid-2007 to apply for protection from deportation and work permits if they met certain requirements. Beneficiaries had to be under the age of 16 upon entering the country; no older than 31 as of June 15, 2012; lived continuously in the U.S. since mid-2007; be enrolled in high school or college, already have a diploma or degree, have a GED certificate or be an honorably discharged veteran of the U.S. military; and have no felony criminal convictions, significant misdemeanor convictions, no more than three other misdemeanor convictions or otherwise pose a threat to national security or public safety.

The program did not provide lawful immigration status. Instead, through what the Obama administration characterized as the exercise of prosecutorial discretion, it granted a deferral from possibly being removed from the U.S. to those who qualified; it also granted work permits. The deferrals and permits were granted for two-year periods and could be renewed for additional two-year periods.

The Department of Homeland Security says existing DACA participants whose eligibility expires between now and March 5 have until Oct. 5 to apply for renewal. The department will also “adjudicate on an individual case-by-case basis” requests to enroll in the program and for renewal that were received as of Tuesday. However, new applications will not be accepted going forward.

Valid permits will remain in effect until they expire, “unless terminated or revoked” before then, according to a fact sheet on the DHS website.

Immigration and Customs Enforcement says its enforcement priorities have not changed. It has no plans to target DACA holders as their permits expire. They will be eligible for deportation, but remain a low priority.

The USCIS generally has not referred cases in which a person’s DACA application is denied to immigration enforcement authorities unless the case involves a criminal offense, fraud or a threat to national security or public safety.

The DREAMers had been in legal limbo since the start of the current administration. Throughout his campaign, Trump railed against the 2012 executive order signed by Obama — and pledged to “immediately terminate the policy” once he took office.

But after being sworn in, he expressed some compassion toward DACA recipients. In an interview with ABC News on Jan. 25, Trump said, “They shouldn’t be very worried. I do have a big heart. We’re going to take care of everybody.”

The Obama program was thrown into the center of a looming court battle in late June when a coalition of 10 state attorneys general, led by Texas’ Ken Paxton, threatened to sue the Trump administration as early as Sept. 5 if it refused to phase out DACA. They argued that Obama had overstepped his authority in creating and implementing the program. Only Congress has the authority to legislate such a change in U.S. immigration law, they contended.

“[T]he program represents an unconstitutional exercise of legislative power by the Executive Branch,” Paxton wrote in an op-ed for USA Today in late July. “Phasing out DACA is about the rule of law, not the wisdom of any particular immigration policy,” Paxton also wrote at the time before emphasizing the principle of separation of powers at the heart of the structure of the federal government.

Sessions had advocated for the termination of DACA but, as BuzzFeed reported in March, he was often outargued by former chief of staff Reince Priebus and former chief strategist Steve Bannon, who like Trump wanted to see it preserved.

Bannon, who held hard-line views on immigration that aligned more closely with the attorney general on other policy issues, reportedly had persuaded the president to spare DREAMers and use them “as a strategic asset in the coming immigration policy battles.”

But with Bannon and Priebus now gone from the West Wing, it appears the position held by Sessions and Stephen Miller, another Trump White House aide with ties to Sessions, has won out — under the pressure exerted by Paxton and some of his fellow state attorneys general.

Trump’s decision leaves Congress facing increasing pressure to find a solution for a population that was estimated in 2012 to include as many as 1.8 million immigrants — of which about 800,000 have been granted deferred status under DACA.

At the moment there are at least two bipartisan bills that could grant legal status or create a pathway to citizenship for those who were eligible for DACA. In July, Sens. Dick Durbin, D-Ill., and Lindsey Graham, R-S.C., introduced a new version of the DREAM Act, after which the DREAMers are named. And a companion bill was filed in the House by Reps. Ileana Ros-Lehtinen, R-Fla., and Lucille Roybal-Allard, D-Calif.

Additionally, Rep. Luis Gutierrez, D-Ill., introduced the American Hope Act, while Rep. Carlos Curbelo, R-Fla., introduced the Recognizing America’s Children Act, a plan that has some support in his party.

Durbin introduced an earlier version of the DREAM Act — the “Development, Relief, and Education for Alien Minors Act” — in late 2010; that bill failed to get enough votes to allow a floor vote. But the legislative project goes back much longer than the middle of Obama’s first term as president. Durbin first filed legislation about the DREAMers in 2001. “Other versions passed the House in 2010 and in the Senate, as part of a larger immigration bill, in 2013. But no bill has ever been passed by both chambers,” according to the Washington Post.

In 2012, Obama stepped in with the DACA program when Congress failed to pass a version of the DREAM Act then. At the time, Obama justified his action, saying, “These are young people who study in our schools, they play in our neighborhoods, they’re friends with our kids, they pledge allegiance to our flag. They are Americans in their heart, in their minds, in every single way but one: on paper.”

In an interview with Wisconsin talk radio WCLO on Friday, Ryan said that he opposes the Trump administration ending DACA and that it is up to Congress to find a legislative fix to the question of what to do with the DREAMers. The speaker said that Obama was wrong to act without Congress and that Trump should defer to Congress to fix the issue.

“Having said all of that there are people who are in limbo. These are kids who know no other country, who were brought here by their parents and don’t know another home,” Ryan said. “And so I really do believe there needs to be a legislative solution, that’s one that we’re working on, and I think we want to give people peace of mind.”

Responding to Ryan’s comments, House Minority Leader Nancy Pelosi, D-Calif., wrote Ryan, according to Politico, asking that he meet with the Congressional Hispanic Caucus and other House Democratic leaders “to discuss a comprehensive legislative solution for our country’s DREAMers.” In her letter, the top Democrat in the House also said legislative action was necessary “to shield … [the] DREAMers from the arbitrary cruelty of deportation.”

Whatever Congress may do, another potential consequence of Trump’s action is that it is likely to bring his predecessor, who is arguably the country’s most high-profile Democrat, back into the political debate over the fate of the DREAMers.

In his final news conference as president and just days before Trump was inaugurated, Obama said he would remain largely silent for the next year on most political issues — with a few exceptions where the nation’s “core values” might be at stake, in his view. Among those, was taking action against the DREAMers, including deportation.

“The notion that we would just arbitrarily or because of politics punish those kids, when they didn’t do something themselves … would merit my speaking out,” he said.