Trump didn’t act and didn’t want to, plus 4 other takeaways from the Jan. 6 hearings 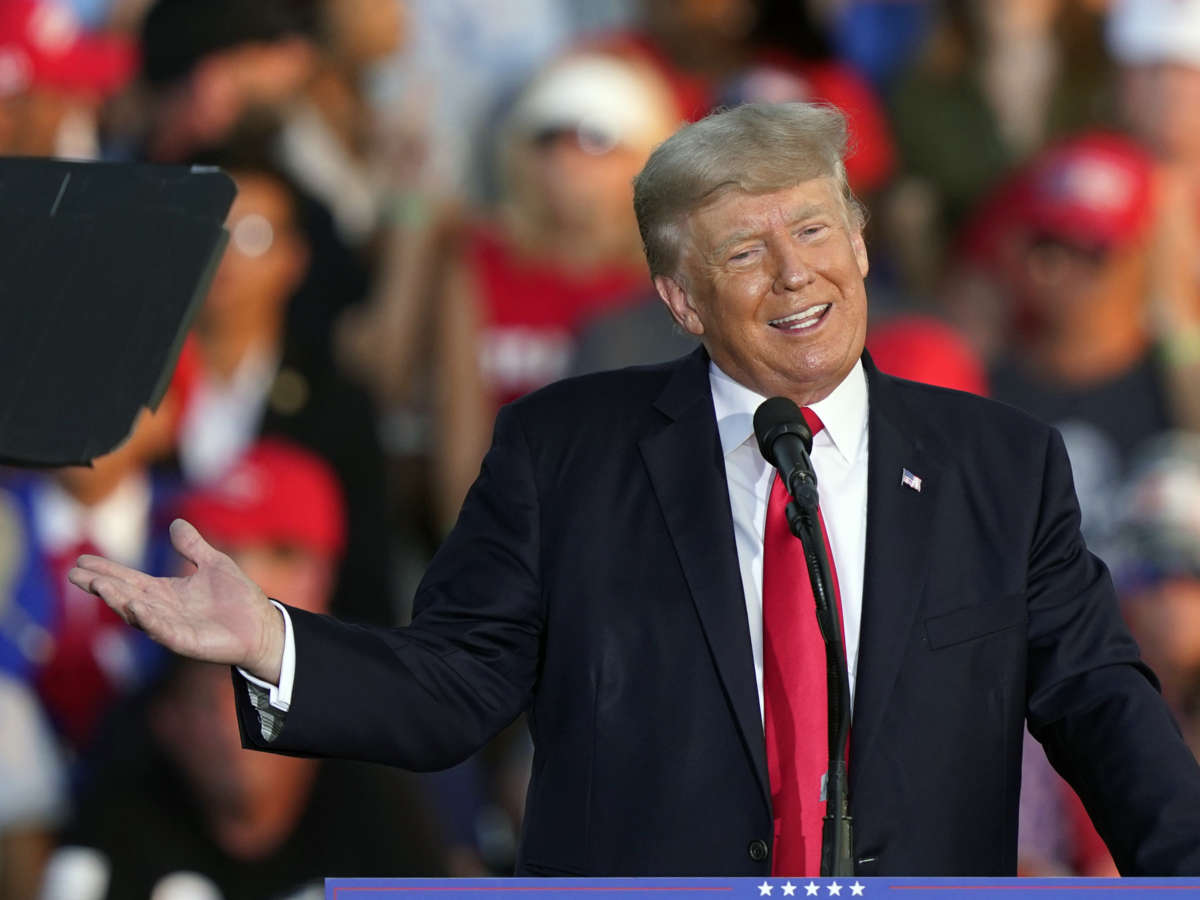 In the early evening of Jan. 6, after former President Donald Trump finally and reluctantly put out a video telling rioters to go home, after hours of staffers urging him to do so, he had only one thing to say.

“Mike Pence let me down,” Trump told a staffer of his vice president.

That was revealed during prime time on Thursday by Rep. Adam Kinzinger, R-Ill., in the last of the first series of Jan. 6 committee hearings.

Jan. 6, 2021 was the worst attack on the U.S. Capitol since British soldiers burned it in 1814. People died. Members of Congress ran for their lives. Gallows were erected for Pence. Secret Service agents scrambled and said last goodbyes.

This was an attack that didn’t come from outside, it came from within, from a mob of supporters of the defeated former president, who pulled the wool over their eyes and convinced them — with lies — that it had all been stolen.

The committee, across these eight hearings, has built a case – more political than legal — that Trump, who continues to lie about the election and teases that he will run again in 2024, is not fit to hold the office.

Here are five takeaways from the hearings thus far:

1. Trump declined to tell rioters to go home for hours despite being urged to do so — and that had consequences.

The committee already laid out that Trump was aware there were many in the crowd who had weapons, but he wanted them to be allowed to bypass metal detectors and be allowed into his speech at the Ellipse. He somehow was confident they weren’t there to hurt him.

Likewise, he was aware that his supporters could become violent and was aware in real time that they were becoming violent. He watched on TV as it all went down. As things got worse, and staffer after staffer urged him to make a statement or put out a tweet that the crowd go home, he declined to do so until hours later.

In fact, when he finally did, when it happened to be clear that the insurrection would fail, he empathized with them.

That was the last straw for Sarah Matthews, a former deputy press secretary who testified Thursday.

“He didn’t distinguish between those who peacefully attended his speech and those we watched cause violence,” Matthews said, adding, “As a spokesperson, I knew I would be asked to defend that. His refusal to act and call off the mob that day, his refusal to condemn the violence was indefensible.”

She resigned that night.

Even the next day, in outtakes of his videotaped speech to supporters, Trump was editing on the fly, and insisted: “I don’t want to say the election’s over.”

The bottom line is Trump knew what was going on, and could have taken action, but chose not to, for hours. It was three hours and seven minutes from the end of his speech to when he finally put out the video telling the rioters to go home.

And that had consequences — violence and damage to people and the building, but also to America’s reputation around the world, testified Matthew Pottinger, a former deputy national security adviser in the Trump White House.

Jan. 6, he said, “emboldened our enemies by helping give them ammunition to feed a narrative that our system of government doesn’t work, that the United States is in decline.”

2. A political argument more than a legal one.

The committee has made a strong case that Trump inspired Jan. 6. A number of those facing charges for their role that day have pointed the finger at the president, too.

Whether there’s any hard, prosecutable evidence of Trump’s intent and coordination is less clear. It’s been somewhat surprising how few first-hand conversations with Trump we’ve heard about in these hearings with this many witnesses so close to the former president.

But Trump’s criminal culpability, if any, is for the Department of Justice to determine.

It’s becoming clearer after several of these hearings, that the committee’s goal is less legal and more political.

Trump still won’t acknowledge the truth that he lost the 2020 election. He’s instead using his false grievance-filled election lies as fuel for a potential 2024 run. And that seems to be the key thing this committee is trying to prevent – Trump holding office again.

“Every American must consider this,” committee Vice Chair Rep. Liz Cheney, R-Wyo., said, “can a president who is willing to make the choices Donald Trump made during the violence of Jan. 6 ever be trusted with any position of authority in our great nation again?”

Are they convincing people? Perhaps, to a degree. The latest NPR/PBS NewsHour/Marist poll, out Thursday, found that hardcore partisans are pretty locked in – and Republicans are mostly not paying attention.

But it did also show that a majority of independents now blame Trump for what happened Jan. 6 (57%) and describe Jan. 6 as an insurrection and threat to democracy (52%). Both are up 9 points since last December. That’s notable, given independents make up a good deal of the dwindling share of swing voters left in this country.

3. It’s hard to dismiss these witnesses.

We’ve said it before, but we’ll say it again, it gets harder and harder for Trump loyalists to dismiss these witnesses as Republicans in Name Only, or RINOs, with an ax to grind.

These have been people who worked for Trump’s campaigns, his White House and voted for him. And there have been many of them.

Cheney attempted to reframe what’s being said not as testimony but as a “series of confessions” from people close to the former president.

“The case against Donald Trump in these hearings is not made by witnesses who were his political enemies,” Cheney noted. “It is instead a series of confessions by Donald Trump’s own appointees, his own friends, his own campaign officials — his own family.”

Trump has a history of turning up the pressure. Cheney has warned against potential witness intimidation, but it’s been clear that no one has been immune from Trump’s pressure campaigns — not his vice president, not Secret Service agents, not state officials or local election workers.

He’s not even beyond manipulating his own supporters — for their time, action or money – as the committee has shown.

4. For members of the committee, this has, at times, felt personal.

Others on the committee, though, seem eager to grind their axes. Those blades seem sharpest for members of their own party, and Rep. Adam Kinzinger, R-Ill., has often had his hand on the handle.

“I’m glad I’m leaving here in a year, because I’m just being surrounded by a bunch of children,” Kinzinger said back in April. “I hope my party can finally remember where our foundations are … .”

Kinzinger, who is retiring at the end of his congressional term, has been ostracized by members of his own party — and family — and targeted by the former president. At times, he has channeled that anger into these hearings.

“Whatever your politics,” he said Thursday, “whatever you think about the outcome of the election, we as Americans must all agree on this: Donald Trump’s conduct on Jan. 6 was a supreme violation of this oath of office and a complete dereliction of his duty to our nation. It is a stain on our history, it is a dishonor to all those who have sacrificed and died in service to our democracy, when we present our full findings we will recommend changes to laws and policies to guard against another Jan. 6.”

This committee has revealed in prior sessions that a number of Republican colleagues have sought pardons.

And then in Thursday’s session, Rep. Elaine Luria, D-Va., highlighted a video of Missouri Republican Sen. Josh Hawley running through the halls to evacuate, after previously raising a fist to the crowd in solidarity.

“Think about what we’ve seen,” Luria said. “Undeniable violence at the Capitol. The vice president being evacuated to safety by the Secret Service. Senators running through the hallways of the Senate to get away from the mob.”

Then she tied it back to the larger point: “As the commander in chief, President Trump was oath and duty bound to protect the Capitol. His senior staff understood that.”

5. This is not the last hearing.

Call it just the end of season one, because Cheney left us with this cliffhanger.

“In the course of these hearings, we have received new evidence, and new witnesses have bravely stepped forward,” she said, adding, “Doors have opened. New subpoenas have been issued, and the dam has begun to break.”

“We have considerably more to do. We have far more evidence to share with the American people and more to gather,” Cheney said. “So our committee will spend August pursuing emerging information on multiple fronts before convening further hearings this September.”

That means the committee’s hearings will be getting closer to the November elections — something it originally wanted to steer clear of.