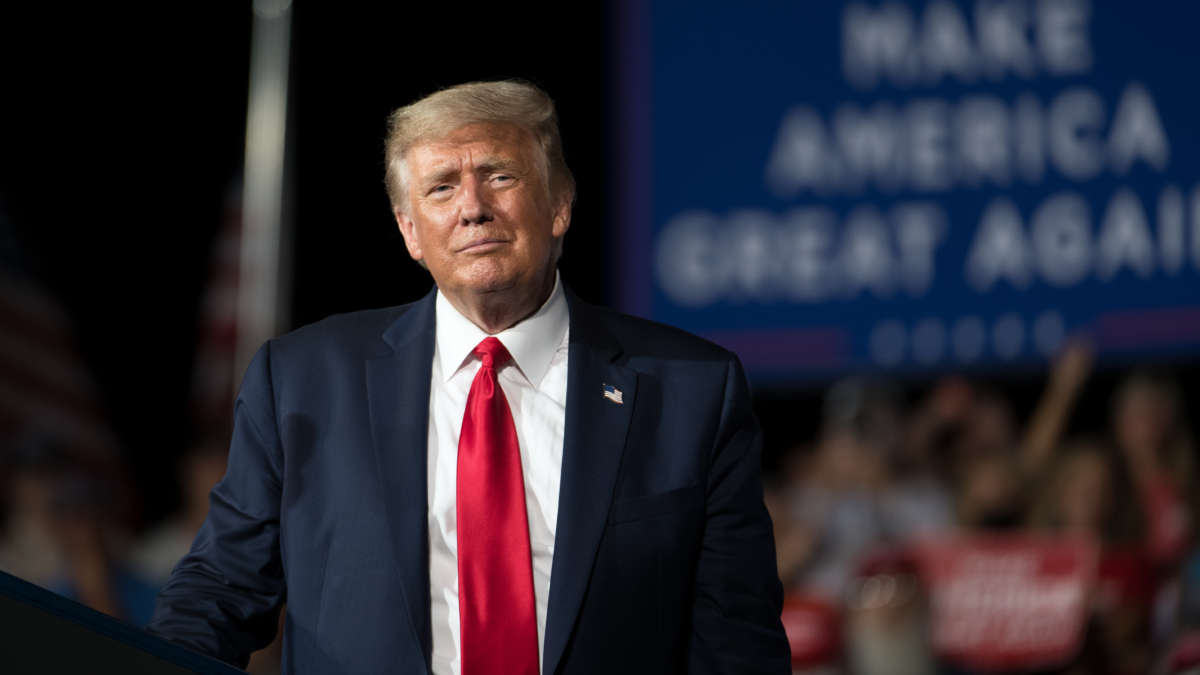 President Trump acknowledged the deadliness of the coronavirus in early February and admitted in March to playing down its severity, according to interviews with the president that are included in a new book by legendary reporter Bob Woodward.

“This is deadly stuff,” the president told Woodward in a Feb. 7 conversation, according to the book, which is called Rage. “You just breathe the air and that’s how it’s passed. And so that’s a very tricky one. That’s a very delicate one. It’s also more deadly than even your strenuous flu.”

But at the time, Trump was publicly saying that the virus was less of a concern.

On Feb. 10, he told supporters in New Hampshire: “Looks like by April, you know, in theory, when it gets a little warmer, it miraculously goes away.” Later that month, Trump tweeted that the virus was “very much under control in the USA.”

And in March, he compared the novel coronavirus to the seasonal flu, saying in a Fox News interview, “We’ve never closed down the country for the flu.”

Trump’s claims came despite scientists’ relatively early findings that the coronavirus presented significantly more challenges than the seasonal flu due to its novelty, high hospitalization rate and other difficulties.

The coronavirus has now been blamed for nearly 190,000 deaths in America.

About a month after the February conversation, Trump admitted to Woodward that he had been playing down the virus’ severity.

“I wanted to always play it down,” Trump told Woodward on March 19. “I still like playing it down, because I don’t want to create a panic.”

One study has estimated that if the United States had implemented social distancing measures just a week earlier in March, some 36,000 lives could have been saved.

Asked about the revelations on Wednesday, White House press secretary Kayleigh McEnany said Trump did not mislead Americans about the risk posed by the coronavirus early during the pandemic.

“The president has never lied to the American public,” McEnany said, telling reporters that Trump was working to “express confidence and calm.”

“He makes clear that he doesn’t want to see chaos,” she said.

Last month, Trump himself tweeted that the “Bob Woodward book will be a FAKE.”

Joe Biden, the Democratic nominee for president, addressed the revelations on Wednesday, calling them a “life and death betrayal of the American people.”

Speaking in Michigan while on a campaign stop, Biden said Trump “knowingly and willingly lied about the threat it posed to the country for months. He had the information. He knew how dangerous it was. And while the deadly disease ripped through our nation, he failed to do his job on purpose.”

Trump’s handling of the virus has come under severe scrutiny as many parts of the U.S. moved more quickly to abandon mitigation measures than other developed nations, even as cases of the virus continued to surge nationwide.

The president has made calling for states to resume normal operations a key component of his reelection campaign, and he aided in the politicization of mask usage, which researchers have found to be effective in slowing the virus’ spread.

The president has continued to hold large (mostly outdoor) rallies, at which many attendees do not wear masks, despite public health guidance against large, densely packed gatherings of people.

NPR obtained a copy of Woodward’s book ahead of its Sept. 15 release.

The president has said that he expects to see a fast-tracked vaccine available to the public by no later than the end of the year, but possibly earlier.

Democrats have expressed concern and cast doubt on Trump’s promises to deliver a safe and effective vaccine under such a short deadline.