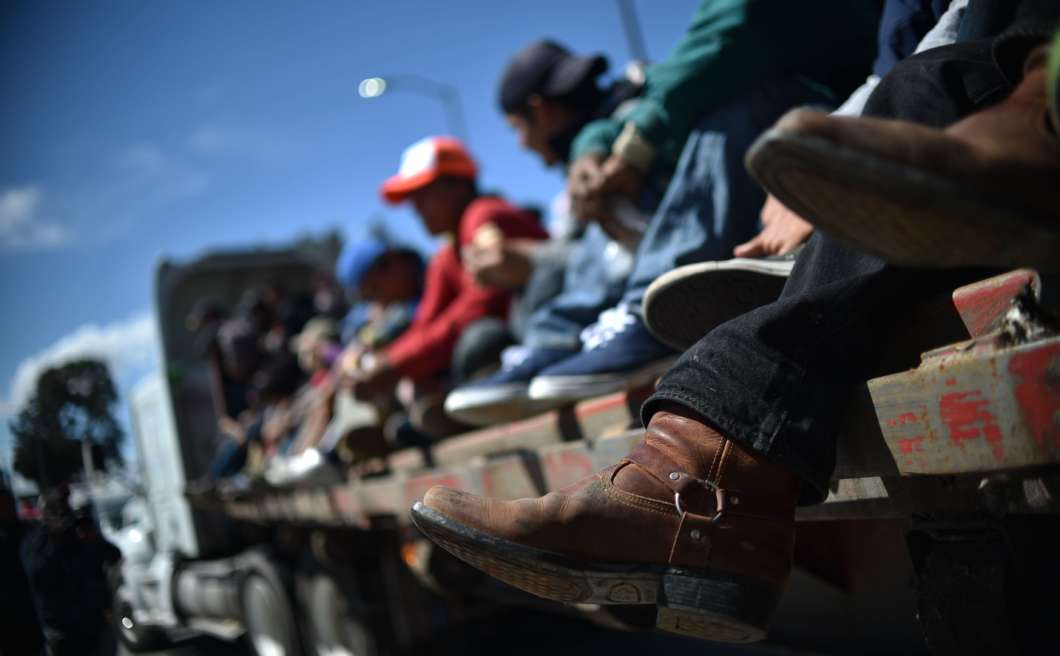 Migrants from Central America ride in a truck Monday as they travel toward the U.S. on the Mexico City-Puebla highway. Thursday, the Trump administration issued new a new rule for asylum-seekers.
Image credit: Rodrigo Arangua

The Trump administration is taking steps to stem the flow of Central American migrants crossing the U.S. border from Mexico.

The administration issued a new rule Thursday designed to prohibit migrants who cross the border outside of designated entry points from seeking asylum in the United States.

The measure is almost certain to face legal challenges. Advocates say federal law allows anyone on U.S. soil to petition for asylum, even if that person crossed the border illegally.

The administration wants to get around that provision by using the president’s broad authority to exclude any immigrant — or class of immigrants — deemed “detrimental to the interests of the United States.” That’s the same authority the president used when he issued his travel ban on a variety of mostly Muslim countries. That ban was initially blocked by the courts but after several revisions was ultimately upheld by the U.S. Supreme Court.

Judges may face a similar test, weighing the president’s broad authority to exclude migrants against the right to apply for asylum.

“The question becomes, if these two provisions conflict, which one wins?” said Stephen Legomsky, former chief counsel for U.S. Citizenship and Immigration Services. He suspects the right to apply for asylum would carry the day.

The new measure is designed to funnel asylum-seekers to official ports of entry, where the administration says their claims could be processed more efficiently. The move could also dramatically limit the number of people admitted to the U.S.

“The Trump administration is taking a sledgehammer to the cherished American tradition of protecting people fleeing persecution,” said Ur Jaddou, director of the advocacy group DHS Watch.

The president has long been frustrated by the number of immigrants crossing the border illegally from Mexico. Although the overall numbers are well below what they were at their peak in the late 1990s and early 2000s, today’s border crossers are more likely to be families and children from Central America. For legal reasons, they are more difficult to expel than the single adults from Mexico who made up the bulk of border crossers a generation ago.

Many of the Central American migrants seek asylum once they arrive in the U.S., claiming fear of persecution if they return home. Administration officials say that while most asylum-seekers pass their initial screening test, many never actually file an asylum claim or they fail to appear for a scheduled asylum hearing. Actually, the majority do go to court. And less than 1 in 5 is found to actually meet the standards for asylum.

“Our asylum system is overwhelmed with too many meritless asylum claims from aliens who place a tremendous burden on our resources, preventing us from being able to expeditiously grant asylum to those who truly deserve it,” Homeland Security Secretary Kirstjen Nielsen and acting Attorney General Matthew Whitaker said in a joint statement.

In recent weeks, Trump has sounded dire warnings about a “caravan” of migrants from Honduras and other Central American nations who are slowly making their way through Mexico toward the border. He has ordered thousands of active-duty military troops to support border enforcement agents.