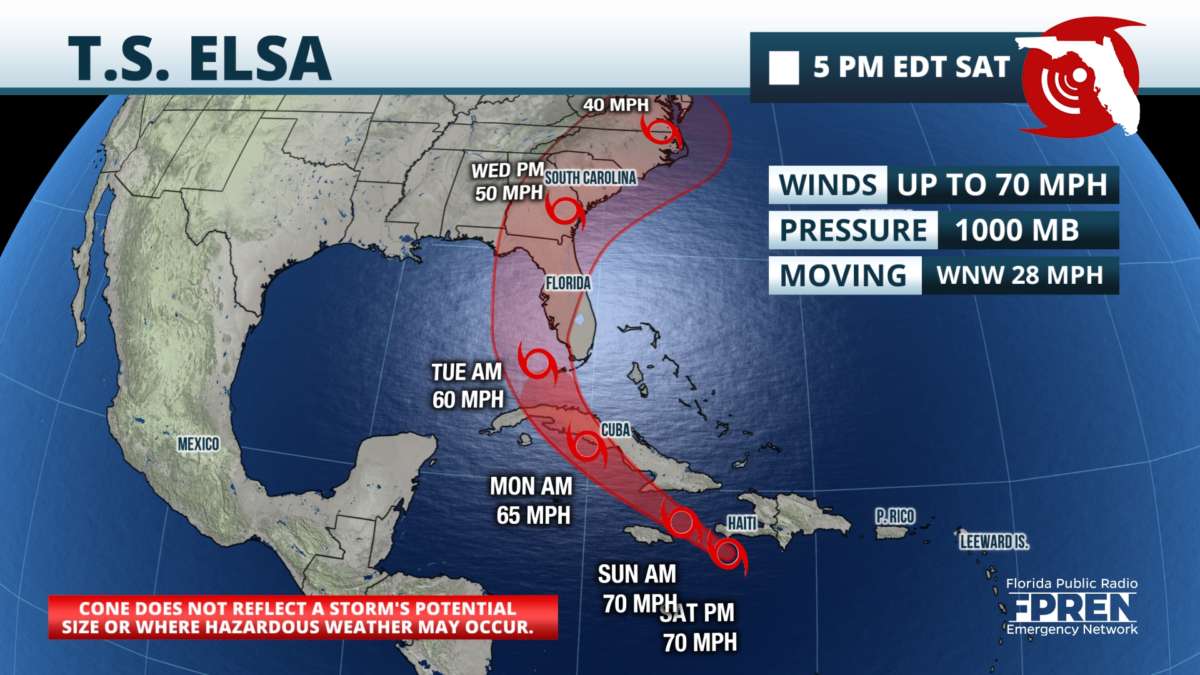 A Tropical Storm Watch has been issued for the Florida Keys from Craig Key westward to the Dry Tortugas. Tropical Storm conditions are possible as soon as Monday in the Keys and is likely to spread northward into South Florida late Monday into Monday night.

PORT-AU-PRINCE, Haiti (AP) — Hurricane Elsa has fallen back to tropical storm force as it brushed past Haiti and the Dominican Republic. It still threatens to unleash flooding and landslides before taking aim at Cuba and Florida.

The storm was located about 255 miles (410 kilometers) east of Kingston, Jamaica, and was moving west-northwest at 29 mph (46 kph).

The long-term forecast track shows it heading toward Florida as a tropical storm by Tuesday morning, but some models would carry it into the Gulf or up the Atlantic Coast.

Elsa weakened to a tropical storm less than 50 miles south of the coast of the Dominican Republic Saturday morning.

Elsa is rapidly churning west-northwestward through the Caribbean, where conditions were expected to deteriorate along the southern coast of Hispaniola Saturday. The mountainous terrain of the island is likely to enhance rainfall totals in spite of the storm’s fast forward motion. Rainfall amounts of 4 to 8 inches, with locally higher amounts in excess of one foot, are likely to cause life-threatening flash floods and mudslides. Similar rainfall amounts are possible Sunday into Monday in Jamaica and Cuba.

The storm’s forward motion has been occasionally in excess of 30 mph from the flow around a strong high pressure ridge over the subtropical Atlantic Ocean. Such a fast motion makes it difficult for Elsa’s circulation near the ocean’s surface to be vertically aligned with its mid-level circulation some 10,000 to 15,000 feet above the ocean. There is also some wind shear from the northwest which is preventing the storm from intensifying.

Elsa is forecast to reach the outer skirts of the high pressure ridge on Sunday. As it does so, its forward motion is expected to slow down considerably, perhaps at half the speed it is moving on Saturday. Meanwhile, a strong trough of low pressure is moving off the Southeast coast of the United States. This trough is responsible for a front slipping unusually far south into North Florida for early July. The trough will leave behind what is called a “weakness” in the subtropical ridge. Tropical storms and hurricanes move toward the path of least resistance — toward these weaknesses in the flow. That will cause Elsa to turn more toward the north, in the general direction of the Florida Peninsula early this upcoming week.

This forecast path will take Elsa near or directly over the high terrain of Hispaniola and eastern Cuba, in particular. Elsa’s core circulation is small, so it is highly susceptible to weakening if it interacts with this rugged terrain, which is becoming increasingly probable.

Regardless of Elsa’s precise strength, heavy rainfall is becoming more likely over the Florida Peninsula and Big Bend starting on Monday and lasting until midweek. Rainfall totals of 2 to 5 inches, with locally higher amounts, may fall near the path of Elsa. Since many areas are already receiving heavy rain this weekend from a cold front, there will be a heightened risk of flash flooding. If Elsa does not spend as much time over the islands of the Caribbean or is able to move over the Gulf of Mexico, it may also be able to produce tropical storm force winds over parts of the state.

Heavy rainfall may spread as far north as coastal Georgia and the eastern Carolinas Wednesday and Thursday as the storm accelerates toward the northeast.

SAN JUAN, Puerto Rico (AP) — Hurricane Elsa raced toward Haiti and the Dominican Republic on Saturday, where it threatened to unleash flooding and landslides before taking aim at Cuba and Florida.

The Category 1 storm on Saturday was located about 505 miles (815 kilometers) southeast of Santo Domingo and was moving west-northwest at 30 mph (48 kph).

It had maximum sustained winds of 85 mph (140 kph), with the hurricane expected to become a tropical storm after hitting Cuba, according to the National Hurricane Center in Miami.

The long-term forecast track showed it heading toward Florida as a tropical storm by Tuesday morning, but some models would carry it into the Gulf or up the Atlantic Coast.

The more reliable guidance (in red) is trending on a track of #Elsa‘s center near or just west of #FL. However, uncertainty remains high on both this and the storm’s intensity by then.