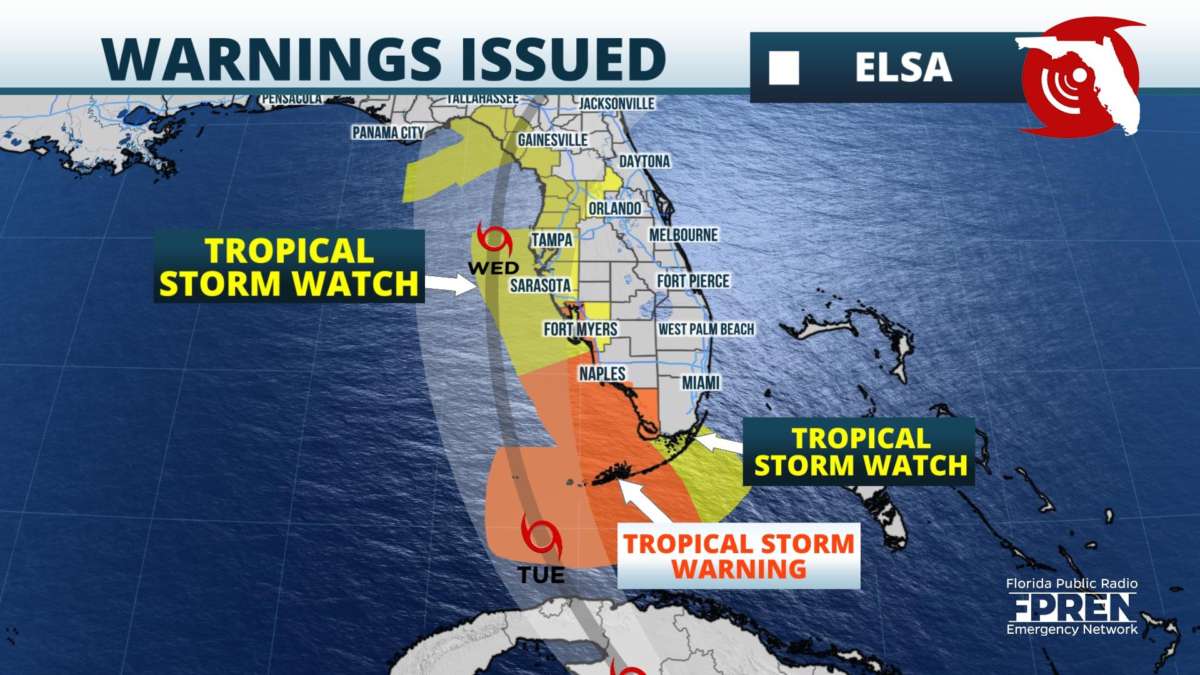 Update as of 5 AM Monday:

Tropical storm conditions are likely, especially in the lower Keys, starting tonight. Those conditions are on track to spread northward into Collier county during the pre-dawn hours of Tuesday and then into the Fort Myers and Charlotte county areas during the mid and late morning hours of Tuesday. The onset of tropical storm winds are most likely Tuesday afternoon in the Manatee and Sarasota county areas, reaching the Tampa/St. Pete metro late Tuesday afternoon. Conditions are likely to deteriorate along the Nature Coast Tuesday evening, when tropical storm conditions are possible there. Wind gusts of 50 to 60 mph are likely along the coast, with 40 to 50 mph gusts possible within the watch and warning areas inland with the strongest bands.

Update as of 5 PM Sunday:

Original Story from 11 AM Sunday:

The storm’s motion in excess of 30 mph early Saturday morning had slowed down to a little more than 10 mph Sunday morning. Tropical cyclones, on average, move between 10 and 15 mph, so Elsa is now moving at a pace that is more common. Tropical Storm Warnings continued over Jamaica and a large portion of Cuba, where tropical storm conditions are expected to continue on occasion through Monday. Flash flooding and mudslides are possible on the mountainous islands and on Haiti, where 4 to 8 inches of rain is expected. Isolated areas were expected to receive as much as 15 inches.

The storm itself has become disorganized in the face of strong wind shear and its close pass to Haiti on Saturday. Its interaction with Cuba Sunday night and Monday is likely to cause additional weakening before it emerges over the Florida Straits Monday night. A small amount of re-strengthening is possible in the Gulf of Mexico, but strong wind shear is expected to keep the heaviest rain and winds east of the circulation center and most likely prevent Elsa from regaining hurricane strength.

The first rain bands from Elsa over the Florida Keys are expected Monday afternoon, where Tropical Storm Watches remain in effect. Tropical storm force winds are likely, particularly over the lower and middle Keys late Monday afternoon into Monday night. The slower storm motion means any tropical storm force winds over South Florida would hold off until overnight Monday or at first light on Tuesday, favoring the Gulf side.

Tropical storm conditions are possible as far north as Tampa and Orlando Tuesday evening, and then from the Nature Coast into North-Central and Northeast Florida overnight Tuesday into Wednesday. If tropical storm winds were to occur, they would be more likely on the Gulf of Mexico side of the peninsula Tuesday night, but would then shift to Florida’s First Coast on Wednesday as the storm turns more toward the northeast.

Heavy rainfall is likely to be the greatest impact from Elsa. Widespread rainfall of 2 to 5 inches are forecast directly from Elsa, which may result in areas of urban flash flooding and minor river flooding over the Florida Peninsula early this week. A separate front has been producing heavy rainfall over the holiday weekend, particularly from the Tampa/St. Petersburg areas northward to Orlando, Gainesville, and Jacksonville metro areas. These areas have had almost twice their average rainfall since the beginning of June and additional rain from Elsa would increase the possibility of flooding, especially in these areas.

Conditions are likely to improve by Wednesday evening as Elsa begins to move toward the eastern Carolinas.