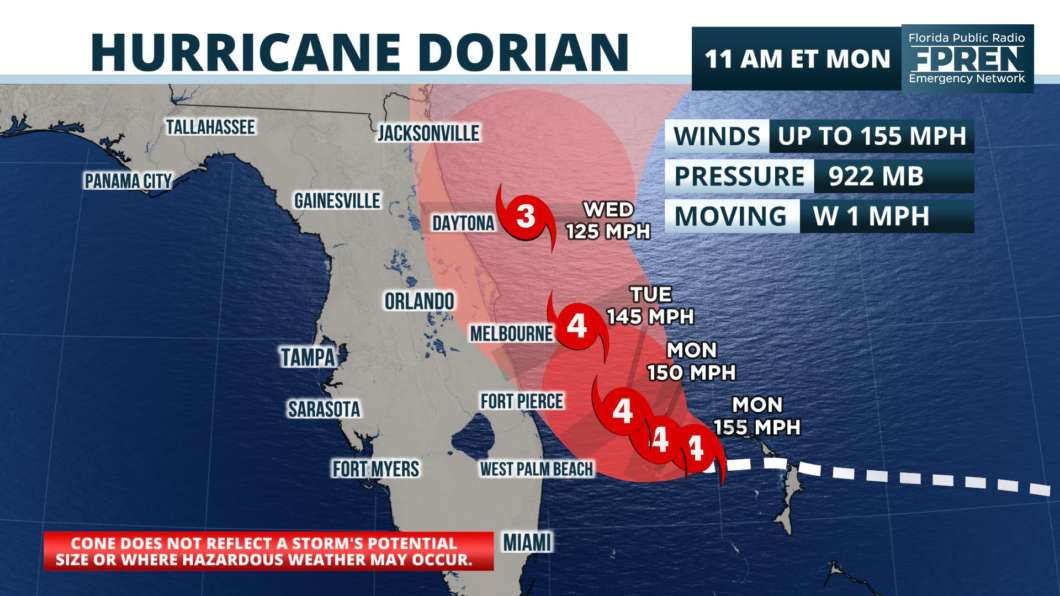 WIND:  Strong tropical storm force winds between 40 and 55 mph are possible in Indian River County by tonight, and then across Brevard and coastal Volusia Counties Tuesday through Tuesday night.  Tropical storm force wind gusts are also possible in and around the Orlando metro area Tuesday and Tuesday night, although there is still some uncertainty how far inland these wind speeds will reach.

TORNADOES:  A tornado or two is possible from the outer rain squalls from Dorian at any time Tuesday through Wednesday night.  Chances of this occurring are highest near the Atlantic Coast, where water spouts are also possible.

SURGE (COASTAL AREAS):  A storm surge of 4 to 7 feet above ground is possible in surge prone areas near the Atlantic Coast.  The combination of surge and high astronomical tides will cause severe runup of waves and water, resulting in inundation of many coastal locations.  There will also be numerous strong rip currents in addition to the very large breaking waves, which will build in excess of 10 feet.

A hurricane watch was extended to the Florida / Georgia border Sunday night as Dorian continued to move slowly west across the Bahamas.

Governor Ron DeSantis is warning Florida residents along the coast to follow directions to evacuate if they are told to leave.

Hurricane Dorian made landfall at Elbow Cay, Abacos. Maximum sustained winds have increased to 185 mph with gusts over 220 mph.

DeSantis says the forecast track of the storm is “perilously close” to the coast of Florida.

“This storm at this magnitude could really cause massive destruction and do not put your life in jeopardy by staying behind when you have a chance to get out,” DeSantis said during a briefing Sunday afternoon.

“You still have time to prepare yourself and to make sure that you and your family are safe.”

“I received a request from Orange County Mayor Jerry Demings to suspend tolls for the East-West Beltway around Orlando. State roads 417 and 429 I have granted that request.”

DeSantis says he’s prepared to open the shoulders of roads if needed but he says traffic is relatively stable at this time.

He says there are currently no fuel shortages or bridge closures.

Mandatory evacuations will begin at 8am tomorrow for Brevard County residents living in mobile homes, in low-lying flood prone areas, or on the barrier islands, and people with special medical needs.

Mandatory evacuations for parts of Volusia County will begin tomorrow morning at 10.

“We are facing a very dangerous storm, so just a matter of getting the word out, encouraging people to get off that barrier island,” said Volusia County emergency manager Jim Judge.

“We saw a lot of folks who did not evacuate during either Matthew or Irma, and then of course we heard the stories that they wish they had.”

Mayor Jerry Demings says Orange County shelters are open and ready to take evacuees, including those from other counties.

“We want to assure our public that Orange County stands ready and prepared to assist out neighbors throughout Central Florida and especially those in the coastal communities,” said Demings.

Hurricane Watches have been posted for parts of the Atlantic coast as Hurricane Dorian strikes the northwestern Bahamas hard.

The storm reached Category 5 intensity Sunday morning and has continued to strengthen.

Top sustained winds are near 180 mph according to the 11 am advisory from The National Hurricane Center. Meteorologist Ray Hawthorne says the core of the hurricane is still likely to stay offshore, but even a small shift to the west could bring severe winds onshore.

“Hurricane Watches have been issued for Deerfield Beach northward to the Volusia/Brevard county line for the possibility of hurricane winds,” said Hawthorne.

“The watch was issued because Dorian’s wind field is forecast to become larger in size as it approaches, and it takes into account small wobbles hurricanes can make. Tropical storm winds are still the most likely scenario and tropical storm warnings remain in effect for areas from the Brevard/Indian River county line southward.”

Hawthorne said that regardless of the exact track, storm surge flooding is likely.

The latest official forecast from The National Hurricane Center predicts 4 to 7 feet of surge from Jupiter Inlet to the Brevard/Volusia county line, and 2 to 4 feet from the Miami-Dade/Palm Beach county line north to Jupiter Inlet.

A flood warning has been issued for the St. Johns River near Astor. The river has reached 2.3 feet which is considered a minor flooding stage.

Low-lying homes and streets on could experience flooding and water could begin to cover some docks. There  is currently a no wake zone in effect on the St. Johns River.

An idle-speed, no-wake zone means a vessel may not travel faster than required to maintain steerageway and headway.  Residents should move to higher ground and avoid walking or driving through flood waters. Just six inches of moving water can knock people down and two feet of water can sweep vehicles away.

4,400 Florida National Guardsmen have been activated. They are prepared to help with disaster relief, security operations, search and rescue, and reconnaissance using high-wheeled vehicles, helicopters, boats and generators.

A Helicopter Search and Rescue Team is also on standby.

President Donald Trump has signed an emergency declaration for the Seminole Tribe of Florida.

FEMA says with this order federal aid money has been made available to tribal members to help with disaster relief.

Residents who should start evacuating include those living in mobile or manufactured homes, in low-lying flood prone areas, the barrier islands including areas from Kennedy Space Center south to the beaches and Merritt Island, and people with special medical needs including electrical dependency.

Volusia County residents who live beachside, in low-lying areas and RV and mobile homes will be ordered to evacuate Monday.

Health First has put its evacuations on hold for patients at Cape Canaveral Hospital.

The county will open ten shelters including pet friendly shelters. Click here for a list of locations.

Osceola County has opened its special needs shelter at the Osceola Council On Aging, located at 700 Generation Pt, Kissimmee, FL 34744.

Orlando International Airport will remain open tomorrow as airport leaders continue to monitor the path of the storm.

Orlando Sanford International Airport will close tonight at 11:59 PM and is expected to stay closed through Monday.

UCF leaders will provide students with an update this afternoon about closures. Rollins will update their students tomorrow.

BCU was under mandatory evacuation on Friday with the campus closed until further notice.

OCPS schools are closed through Tuesday. Parents can follow @OCPSNEWS and OCPS Connect newsletter for updates.