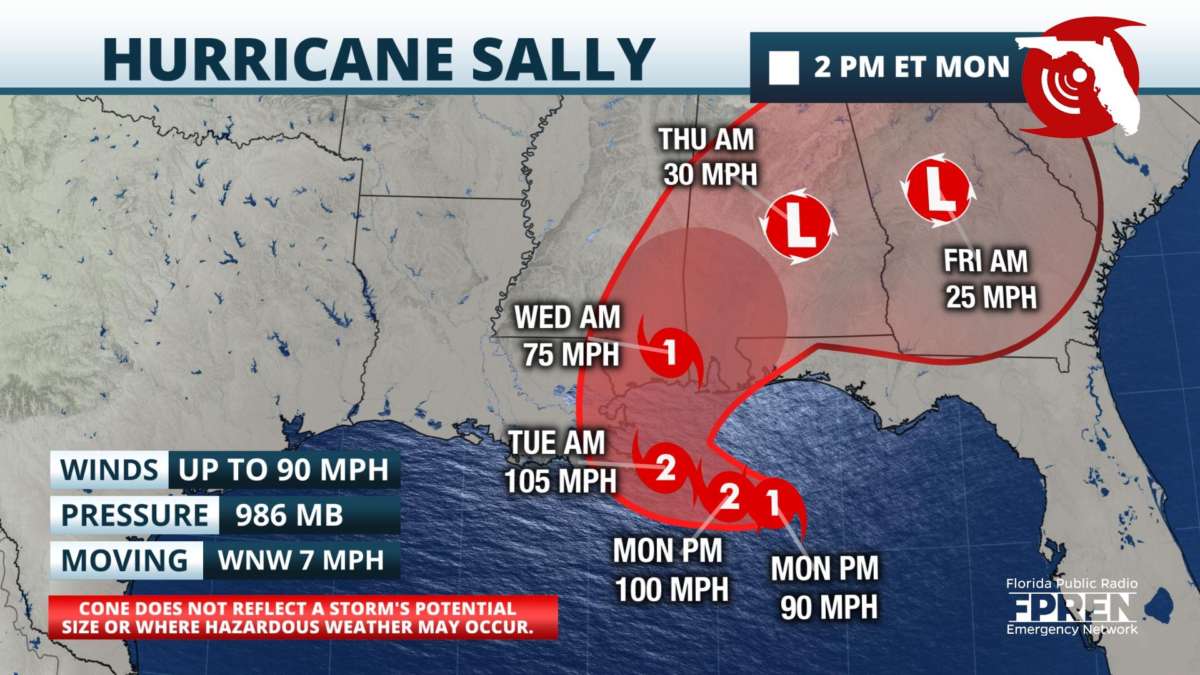 Some coastal Big Bend residents have begun getting heavy rain and flooding as Hurricane Sally continues to creep northwestward. Conditions are expected to worsen overnight.

The storm is predicted to make landfall west of the Alabama-Florida line.

The National Weather Service in Tallahassee reports some Big Bend communities could get between 4 to 8 inches of rain, tropical storm force winds and 1 to 3 feet of storm surge over the next 24 hours.

Schools are closed tomorrow in Bay, Gulf and Franklin counties.

Sally has intensified rapidly and is now a category 1 hurricane in the Gulf of Mexico.

The center of the storm is located about 130 miles east-southeast of the mouth of the Mississippi River and has top sustained winds of 90 mph as of a special midday update from the National Hurricane Center. Meteorologist Ray Hawthorne is tracking Sally and says conditions will deteriorate locally tonight.

“Sally is likely to keep intensifying offshore this afternoon in an environment of light wind shear and the 86-degree waters of the Gulf of Mexico. The steering currents are weak so the hurricane is likely to move slowly and dump more than a foot of rain in an area from Louisiana to the western Florida Panhandle through Wednesday.”

Ray says Sally is now forecast to make landfall as a category 2 hurricane some time Tuesday afternoon or evening somewhere between the Louisiana and Alabama Gulf coasts, where hurricane and storm surge warnings have been issued.

Tropical Storm Sally is nearing hurricane intensity over the Gulf of Mexico.

The center of the storm is located about 130 miles south-southeast of Pensacola Beach and has top sustained winds of 65 mph as of the 10 am advisory from the National Hurricane Center. Meteorologist Ray Hawthorne is tracking Sally and says conditions will deteriorate locally tonight.

“I’m seeing an increase in lightning near the center of Sally offshore, which tells me the storm is on track to become a hurricane either late this afternoon or tonight. We’ll have occasional rain bands here in the Panhandle this afternoon, but the heaviest downpours and most consistent tropical storm force conditions are likely to arrive after sunset and continue on Tuesday.”

Ray says Sally is forecast to make landfall some time Tuesday afternoon or evening somewhere between the Louisiana and Alabama Gulf coasts as a Category 1 hurricane. He says its slow motion will mean 6 to 12 inches of rain over Northern Florida, which is likely to result in widespread flash flooding.

As of the early morning update from the Hurricane Center, it has top sustained winds of 60 mph as it spins about 120 miles from the mouth of the Mississippi River.

“The storm itself is likely to become a hurricane late this afternoon or tonight. Sally is expected to make landfall between the Louisiana and Alabama Gulf coasts Tuesday. Downpours from some of the outer rain bands will cause areas of flash flooding and gusty winds along the Gulf, particularly from Tampa southward, but the worst of the weather is headed for the Florida Panhandle and westward.”

The National Hurricane Center is also monitoring three other storms: Hurricane Paulette, which is almost directly on top of Bermuda, weakening Tropical Depression Rene over the central Atlantic, and newly-formed Tropical Storm Teddy midway between Africa and the Lesser Antilles.

Forecasters say all of these storms are expected to remain over the open Atlantic this week.