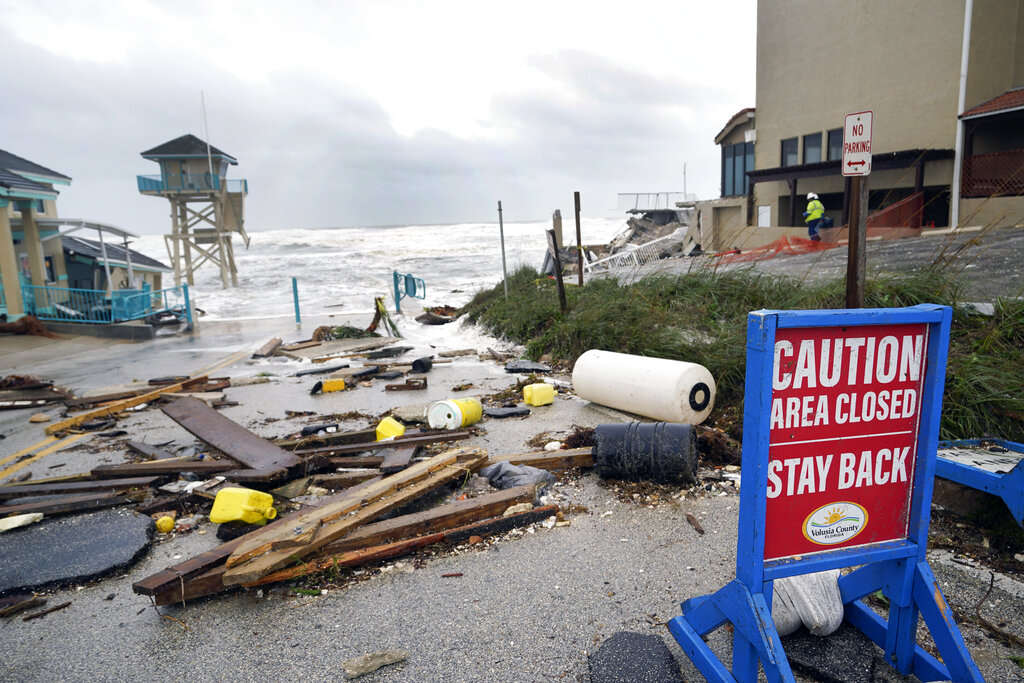 WILBUR-BY-THE-SEA, Fla. (AP) — Tropical Storm Nicole weakened to a tropical depression Thursday night as it crossed the Florida Panhandle on its way north into Georgia.

The storm had sent Florida homes toppling into the Atlantic Ocean earlier Thursday and threatened a row of high-rise condominiums in places where Hurricane Ian washed away the beach and destroyed seawalls only weeks ago.

At 10 p.m., a National Hurricane Center advisory said the center of the storm was about 20 miles (35 kilometers) north of Tallahassee with maximum sustained winds of 35 mph (55 kmh). It was moving to the northwest at 15 mph (24 kmh).

The storm, which caused at least two deaths, was the first November hurricane to make landfall in Florida in 37 years and only the third on record. It delivered another devastating blow just weeks after Ian came ashore on the Gulf Coast, killing more than 130 people and destroying thousands of homes.

Although Nicole’s winds died down after it made landfall as a Category 1 hurricane at about 3 a.m. Thursday near Vero Beach, its storm surge slammed into the shoreline in the neighboring barrier island communities of Wilbur-by-the-Sea and Daytona Beach Shores, sending some homes crashing into the ocean.

Workers check on a possible gas leak at the Pirates Cove Condos after part of the building collapsed due to a storm surge by Hurricane Nicole Thursday, Nov. 10, 2022, in Daytona Beach Shores, Fla. (AP Photo/John Raoux)

Officials in Volusia County, which is northeast of Orlando, said Thursday evening that building inspectors had declared 24 hotels and condos in Daytona Beach Shores and New Smyrna Beach to be unsafe and had ordered their evacuations. At least 25 single-family homes in Wilbur-by-the-Sea had been declared structurally unsafe by building inspectors and also were evacuated, county officials said.

“Structural damage along our coastline is unprecedented. We’ve never experienced anything like this before,” county manager George Recktenwald said during a news conference earlier, noting that it’s unknown when it will be safe for evacuated residents to return home.

The county’s sheriff, Mike Chitwood, said in a social media post that multiple coastal homes in Wilbur-by-the-Sea had collapsed and that several other properties were at “imminent risk.” He said most bridges to the beachside properties had been closed to all but essential personnel and a curfew was in effect.

Krista Dowling Goodrich, who manages 130 rental homes in Wilbur-By-The-Sea and Daytona Beach Shores as director of sales and marketing at Salty Dog Vacations, witnessed backyards collapsing into the ocean just ahead of the storm.

In the aftermath, the backsides of about seven colorful houses along Highway A1A had disappeared. One modern house was missing two bedrooms and much of its living room as water lapped below its foundations. On a partially collapsed wall, decorations spelled out “Blessed” and “Grateful.” Goodrich burst into tears when she saw it.

“Half of the house is gone, but we did manage to get out family photos yesterday,” Goodrich said. “It is overwhelming when you see this. These are hard-working people who got to this point in their lives and now they lose it all.”

“These were the tall high-rises. So the people who wouldn’t leave, they were physically forcing them out because it’s not safe,” Goodrich said.

The homeowners association at the Marbella condominiums in Daytona Beach Shores had just spent $240,000 to temporarily rebuild the seawall Ian destroyed in September, said Connie Hale Gellner, whose family owns a unit there. Live video from the building’s cameras showed Nicole’s storm surge washing the seawall away.

Nicole was sprawling, covering nearly the entire weather-weary state of Florida while also reaching into Georgia and the Carolinas before dawn on Thursday. Tropical storm-force winds extended as far as 450 miles (720 kilometers) from the center in some directions as Nicole turned northward over central Florida.

Condominium amenities and a unit terrace lie toppled onto the beach after the sand below was swept away, following the passage of Hurricane Nicole, Thursday, Nov. 10, 2022, at Ocean Club Condominiums in Vero Beach, Fla. (AP Photo/Rebecca Blackwell)

Although Nicole’s winds did minimal damage, its storm surge was more destructive than might have been in the past because seas are rising as the planet’s ice melts due to climate change, said Princeton University climate scientist Michael Oppenheimer. It adds up to higher coastal flooding, flowing deeper inland, and what used to be once-in-a-century events will happen almost yearly in some places, he said.

A man and a woman were killed by electrocution when they touched downed power lines in the Orlando area, the Orange County Sheriff’s Office said. Nicole also caused flooding well inland, as parts of the St. Johns River were at or above flood stage and some rivers in the Tampa Bay area also nearing flood levels, according to the National Weather Service.

Although Nicole made landfall near Vero Beach, it caused no significant damage there, officials said. Part of a fishing pier washed away in Lauderdale-by-the-Sea, but the brunt of the storm hit north of its center. By 1 p.m., Nicole’s maximum sustained winds were down to 45 mph (70 kph) as it moved toward Tallahassee.

The rare November hurricane could dump as much as 6 inches (15 centimeters) of rain over the Blue Ridge Mountains by Friday, the hurricane center said. Flash and urban flooding will be possible as the rain spreads into the eastern Ohio Valley, Mid-Atlantic, and New England through Saturday.

All 67 Florida counties were under a state of emergency. President Joe Biden also approved an emergency declaration for the Seminole Tribe of Florida, ordering federal help for the tribal nation. Many Seminoles live on six reservations around the state.

The skeletal remains of six people believed to be from a Native American burial ground were unearthed by Nicole’s wind and waves on a Hutchinson Island beach, according to the sheriff’s office in Martin County, which is about 160 miles (257 kilometers) south of Volusia County.

“Detectives are working diligently to preserve and carefully remove the remains that are exposed with the utmost care and respect,” the sheriff’s office said in a news release. The remains will be taken to a medical examiner and then to the state Bureau of Archaeological Research.

Gov. Ron DeSantis said at a Thursday news conference in Tallahassee that about 333,000 customers were without power at mid-morning, about 2.9% of the state’s total. He said there were 17,000 electricity linemen ready to begin restoring power and that numerous other assets including rescue boats and vehicles will be deployed as needed.

Parts of Florida were devastated by Hurricane Ian, which struck as a Category 4 storm. Ian destroyed homes and damaged crops, including orange groves, across the state — damage that many are still dealing with — and sent a storm surge of up to 13 feet (4 meters) onshore, causing widespread destruction.

After Nicole, more flooding along the St. Johns River