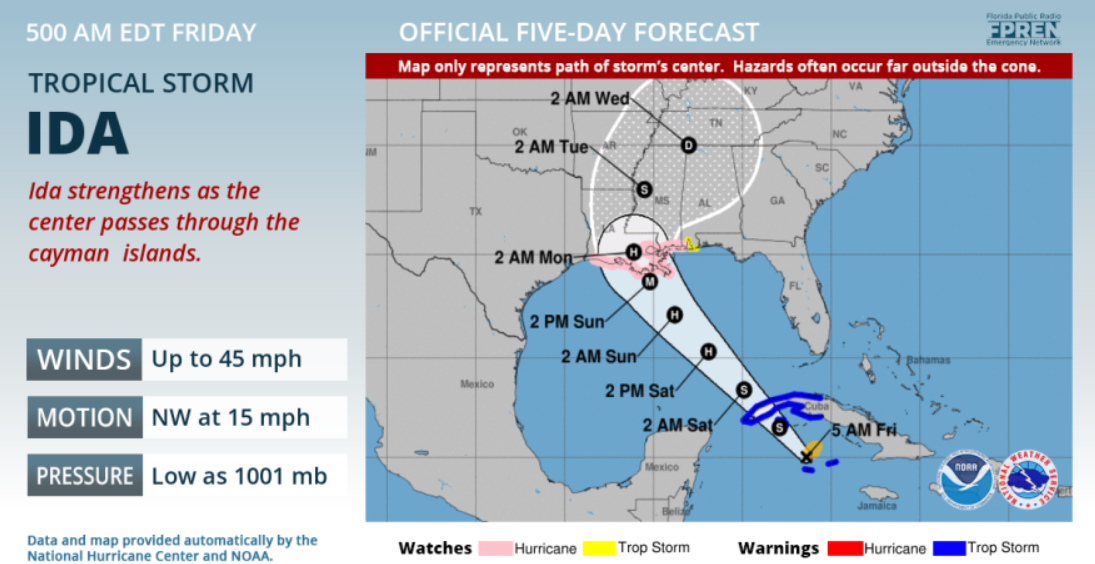 The storm is forecast to top out as a Category 3 storm with maximum sustained winds of 115 mph as it approaches the northern Gulf coast by Sunday night.

Areas along Louisiana’s Gulf Coast – including New Orleans – are under a hurricane watch as Tropical Storm Ida continues to strengthen with a possibility of becoming a major hurricane as it approaches landfall late this weekend.

As of Friday at 5 a.m., Ida was located about 50 miles north-northwest of Grand Cayman and moving to the northwest at 15 mph. Maximum sustained winds are 45 mph with higher gusts.

Ray Hawthorne, meteorologist with the Florida Public Radio Emergency Network, says Ida is forecast to rapidly intensify over the Gulf this weekend after passing over western Cuba tonight and before reaching the coast later Sunday or early Monday.

“Nearly all of the available tools we have as meteorologists are pointing toward Ida becoming a powerful hurricane this weekend — at least Category 3 intensity,” Hawthorne said. “It’s expected to pass over the deepest, warmest part of the Gulf in an environment of light wind shear. Residents and visitors within the watch areas should prepare for severe conditions on Sunday, and heed the advice of local officials.”

Hawthorne said a few of the rain bands could reach the western Florida Panhandle on Sunday, but the worst of the conditions are forecast farther west. Forecasters predict peak storm surges of 7 to 11 feet are likely in parts of Mississippi and Louisiana, destructive winds, and 8 to 16 inches of rain.

Forecasters say Ida could peak at maximum sustained winds of 115 mph as it nears the Louisiana coast on Sunday night.

Information from the Florida Public Radio Emergency Network was used in this report.