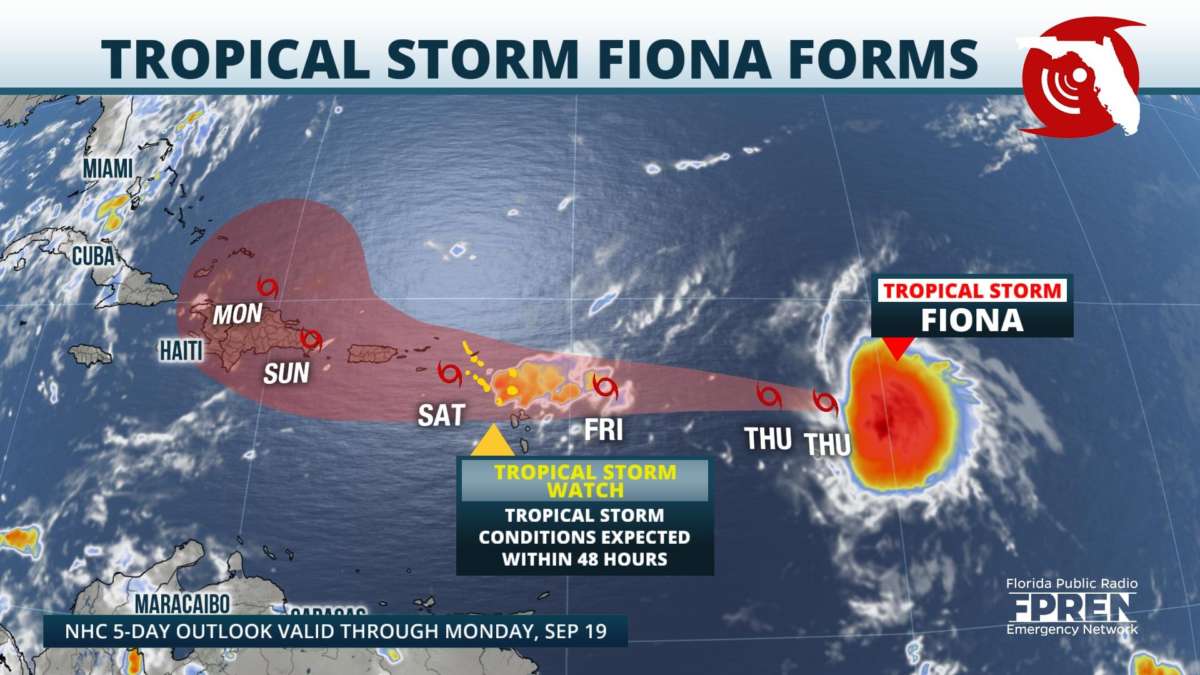 Tropical Storm Fiona formed late Wednesday evening and is forecast to bring heavy rain and wind to the Leeward Islands and Puerto Rico through late week.

After days of monitoring the tropical Atlantic, the National Hurricane Center in Miami classified Invest 96L as Tropical Depression Seven late Wednesday morning. Just under twelve hours later, Tropical Depression Seven strengthened into the sixth named tropical cyclone of the season: Tropical Storm Fiona. The intermediate advisory issued late Wednesday evening depicts winds within Fiona are up to 50 miles per hour. Convection associated with Tropical Storm Fiona is robust, especially on the eastern side of the circulation. Moderate westerly wind shear, which is the change of wind speed or direction with height, coupled with dry mid-levels are expected to keep Tropical Storm Fiona from significant intensification through Friday.

Official forecasts for Tropical Storm Fiona indicate a continued westerly track, likely reaching the Leeward Islands by late Friday with heavy rainfall and gusty winds. Fiona is expected to reach the Virgin Islands and Puerto Rico by Saturday before reaching the Dominican Republic Sunday afternoon. Heavy rains in the mountainous terrain of Puerto Rico and the Dominican Republic could result in mudslides over the weekend, with localized flash and urban flooding possible outside of higher elevations.

Here are the 11 PM AST Wed, Sep 14 Key Messages for Tropical Storm #Fiona. A Tropical Storm Watch has been issued for portions of the northern Leeward Islands. Visit https://t.co/tW4KeGe9uJ for the latest updates. pic.twitter.com/wl8GtbgCED


Tropical storm watches were issued for the Leeward Islands late Wednesday evening and are likely to expand to include Puerto Rico and the Virgin Islands Thursday. The island of Hispaniola, containing both the Dominican Republic and Haiti, are forecast to be impacted by Fiona later this weekend with potential watches not likely until Friday.

Where Fiona tracks after exiting Hispaniola is uncertain. A large ridge of high pressure is forecast to linger over the Atlantic. The exact strength and location of this ridge, called a Bermuda high, can impact where tropical cyclones go. Long-range forecast models Wednesday evening keep Fiona away from Florida, but do provide an increase in tropical moisture across the state by early next week. This will likely result in continued daily downpours and the risk of localized flash flooding. Residents are encouraged to monitor the forecast in the days to come, as changes to the forecast could have implications for Florida’s weather by the second half of next week.