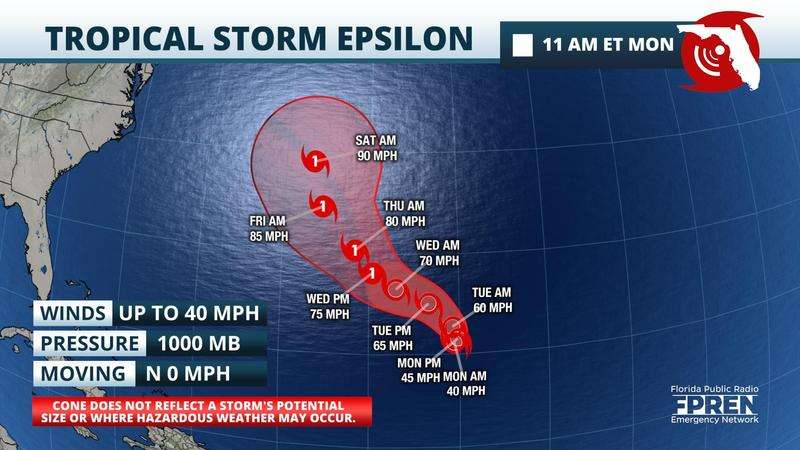 Tropical Storm Epsilon has formed in the central Atlantic, 735 miles to the southeast of Bermuda. Epsilon is near stationary and will continue to be slow moving through Monday night. A slow west-northwest motion should begin on Tuesday which will contine through midweek.

The National Hurricane Center is expecting the storm to be at or near hurricane strength as it approaches the island of Bermuda late this week. While it is too soon to determine Epsilon’s track and intensity near the island, there is a risk for high winds, storm surge, and excessive rainfall. Interestes there should monitor the progression of Epsilon this week.

This is the second time on record that the Greek alphabet letter has been used. The last time Epsilon was used was in the historic 2005 Hurricane Season where the storm formed over a month later on November 29.

The depression does not pose any risk to the east coast of the United States, for now. A blocking high pressure to the north of the system is preventing it from traveling northward into the open Atlantic. Instead it is expected to meander in the vicinity over the next few days. However, there is expected to be some coastal impacts due to the strong high pressure to the north and Tropical Depression 27. Large swells will push westward towards the coastlines leading to high surf and dangerous rip currents this week. These coastal hazards could extend as far south as Puerto Rico and the U.S. Virgin Islands.

Onshore winds from the depression could exacerbate the King Tides which have been peaking since Saturday along parts of the Southeast coast. Coastal flooding may continue across shorelines through early this week, especially if the depression intensifies offshore. The Monday morning forecast from the National Hurricane Center strengthens the depression into a tropical storm later Monday and into a hurricane late Wednesday or early Thursday.

Additionally, the National Hurricane Center said there is a slight chance of tropical cyclone development in the western Caribbean late this week. A broad area of low pressure may develop in the next two to five days to the south of Jamaica and the Cayman Islands. Forecasters Monday morning have given this area a low chance of development over the next few days. It is too soon to determine if this system will pose a threat to Florida or the U.S. East Coast.