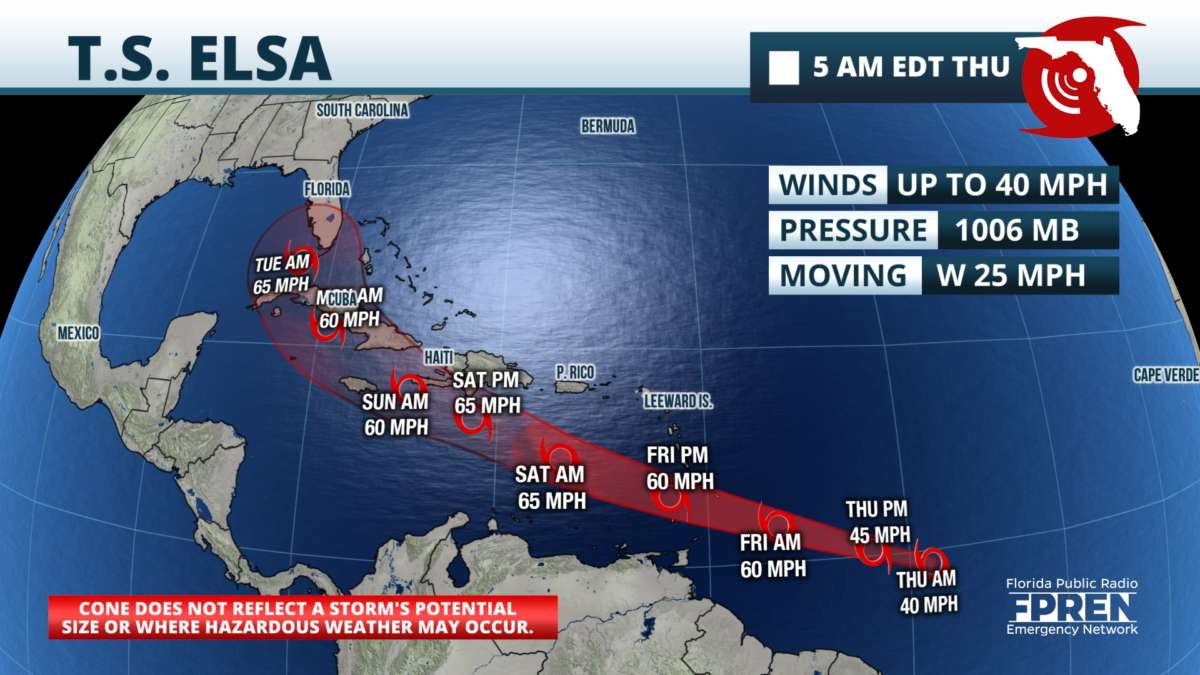 Tropical Storm Elsa formed early on Thursday morning, making it the fifth named storm of the 2021 Hurricane Season. The system is located about 780 miles east of the Windward Islands, and is racing westward at 25 miles an hour. Although it is too soon to tell, Elsa could pose a threat to Florida early next week.

Meteorologists at the National Hurricane Center in Miami had been monitoring a tropical wave that ejected off the African Coast earlier this week. On Thursday morning, this wave had organized enough to be classified as a tropical storm and given the name Elsa. As of the latest reconnaissance information, Elsa is producing 40 mph sustained winds and is briskly tracking westward at 25 miles an hour.

A strong ridge of high pressure should continue to steer Elsa to the west northwest over the next 24 to 36 hours. During that timeframe, Elsa will remain in an environment conducive hospitable for tropical cyclone development and intensification. At the same time, however, Elsa’s track should graze the Windward Islands, and by the end of the weekend, islands in the Caribbean. These land interactions could detract from potential intensification. The latest forecast from the National Hurricane Center projects that Elsa will remain a tropical storm through the next 5 days.

There is good consensus that over the near term, Elsa will track westward through the Caribbean Sea. Toward the end of the weekend, as the system nears Hispaniola, the forecast track becomes less clear. Ultimately it will depend on the strength and position of a ridge of high pressure near Bermuda, and an unusually strong trough of low pressure that is expected to dip into the Southeastern United States Friday and into the weekend. Slight perturbations in the positions and intensity of those features will impact Elsa’s track: The storm could be guided into the western Gulf of Mexico, or it could be pulled into the Atlantic. Details should become more clear this holiday weekend.

Elsa is expected to bring strong winds, heavy rain, and storm surge to the Antilles and parts of the Caribbean over the next several days. Although there are still uncertainties in forecast track and intensity, parts of the US Southeast, including Florida , could be impacted by Elsa as early as Tuesday of next week.

Updates on Elsa will be available in the Florida Storms mobile app.