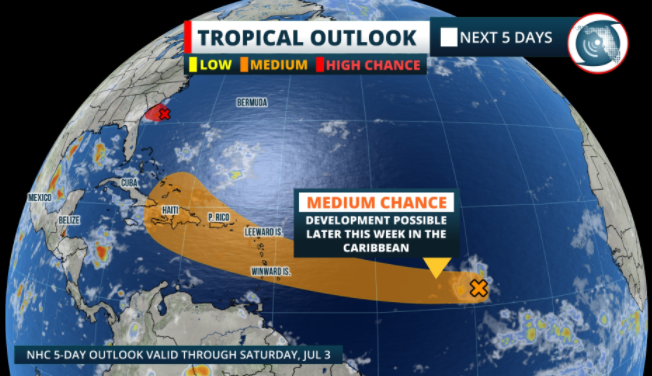 Tropical Storm Warnings are posted from Edisto Beach to South Santee River, South Carolina in advance of Tropical Depression Four, which has formed about 110 miles from Charleston, South Carolina.

Forecasters say it could become a named storm prior to landfall early this evening. Meteorologist Ray Hawthorne says squally weather is already moving onshore there.

“Gusts of 30 to 40 mph and brief heavy rain directly associated with it are likely to hold just north of the state line, over coastal Georgia. The system is small and fast-moving, so the weather should improve quickly after sunset.”

Ray says another and unusually strong tropical wave midway between Africa and the Lesser Antilles has become better organized this morning.

The National Hurricane Center now gives this tropical wave a medium chance of developing as it approaches the Lesser Antilles Wednesday, and Puerto Rico, the Virgin Islands, and Hispaniola Thursday and Friday.