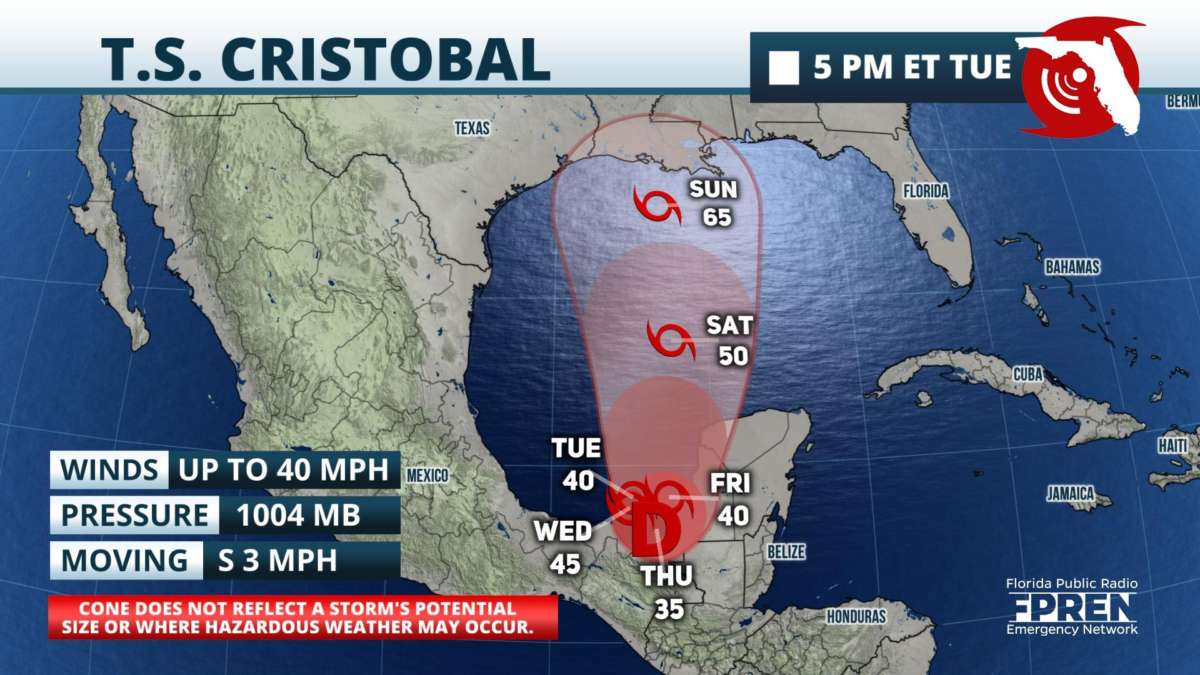 Tropical Depression Three strengthened into Tropical Storm Cristobal Tuesday afternoon in the Bay of Campeche, becoming the earliest third tropical storm to form on record in the Atlantic Basin. The previous record was held by Tropical Storm Colin, which formed on June 5, 2016.

Hurricane Hunters found maximum sustained winds to be near 40 mph and a minimum barometric pressure was 1004 mb in their first flight through the storm Tuesday. As of 5 pm EDT Tuesday, the center of Cristobal was located 140 miles west-southwest of Campeche, Mexico.

According to the National Hurricane Center, deadly flooding has already occurred in portions of Guatemala and El Salvador from Tropical Storm Cristobal. Heavy rain was expected to continue across portions of the Yucatán Peninsula through the remainder of the week, which could trigger additional landslides and flash flooding.

Tropical Storm Warnings were issued from Campeche to Puerto de Veracruz, Mexico with the threat of tropical storm conditions arriving within the next 36 hours. These warnings could persist through Friday before Christobal moves northward away from Mexico.

Tropical Storm Cristobal is expected to slowly drift toward the coast of Mexico, and could potentially move over land Wednesday. Forecasters then say the circulation could turn north and move into the central Gulf of Mexico this weekend and become a potential threat to portions of the U.S. Gulf Coast.

The exact track and intensification of Cristobal remains uncertain in the coming days. One scenario is that the storm will move close enough to the mountainous terrain of Mexico, which would disrupt its circulation and cause it to weaken or dissipate entirely. A second scenario is that the center of circulation stays closer to the coast, then moves back over the Bay of Campeche and resumes strengthening, before eventually accelerating northward into the central Gulf of Mexico. If the second scenario plays out, the entire Gulf Coast of the United States could be at some level of risk from Tropical Storm Cristobal.

Forecasters at the National Hurricane Center say it is too soon to determine the exact location, timing and magnitude of any impacts to the United States, but encourage residents along the Gulf Coast states to monitor Tropical Storm Cristobal over the next several days and prepare in advance.

A second Hurricane Hunter flight was scheduled for 7:30PM EDT Tuesday evening, along with an additional flight for early Wednesday morning. Hurricane Hunters will continue to fly in and investigate the system so long as it stay over open waters.