Tropical Disturbance Expected to Enter into the Gulf this Week 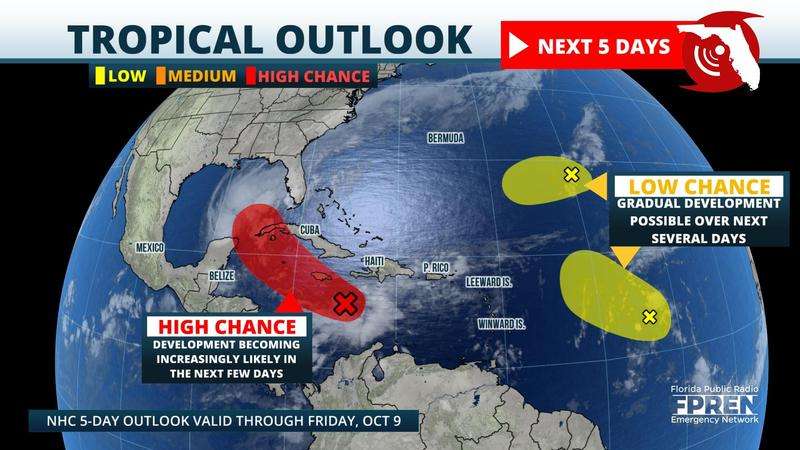 A broad area of showers and thunderstorms, referred to as Invest 92, is expected to enter the southern Gulf of Mexico by midweek bringing an increase in moisture to the Sunshine State and possibly threatening northern Gulf coastlines.

Invest 92, as of Sunday afternoon, had a high chance of developing into a tropical depression or tropical storm in the next two to five days.

Meteorologists anticipate that environmental conditions will become more favorable for further development and a tropical depression could form soon, as the disturbance approaches the western Caribbean and then the southern Gulf of Mexico. Heavy rainfall and gusty winds are expected across parts of Hispaniola, Jamaica, Cuba, and the Cayman Islands through midweek.

Weather models are in a general agreement that the disturbance will continue tracking to the west-northwest across the Caribbean and travel between the Yucatán Peninsula and near western Cuba before entering into the Gulf of Mexico by Wednesday, during which model guidance varies greatly regarding strength and direction.

Preliminary models are suggesting a high pressure ridge building over much of the Southeast United States this week which will help to divert Invest 92 northward and keep its distance from the Sunshine State. However, other weather models are hinting at the ridge building further east which could bring the disturbance closer to the state, particularly the Florida Panhandle.

Moisture is expected to increase across the Florida Peninsula regardless of Invest 92’s track this week. The northern Gulf of Mexico is anticipated to remain unfavorable regarding high vertical wind shear and cooler sea surface temperatures close to the northern Gulf shorelines. Strong vertical winds could shear the rain field of the system and drag the moisture eastward towards Florida beginning in South Florida as early as Tuesday and progressing northward into the Florida Panhandle by next weekend where a potential landfall could occur somewhere along the northern Gulf Coast.

Regardless of development and track, Floridians should remain vigilant over the next few weeks as the hurricane season approaches the final stretch. There are two other areas in the open Atlantic which have low chances for development over the next several days but pose no threat to any land masses.

If Invest 92 attains tropical storm status it will be given the Greek alphabet name Delta. This name has only been used once before in 2005 when it formed on November 23.