Tropical Development Possible in the Caribbean by This Weekend 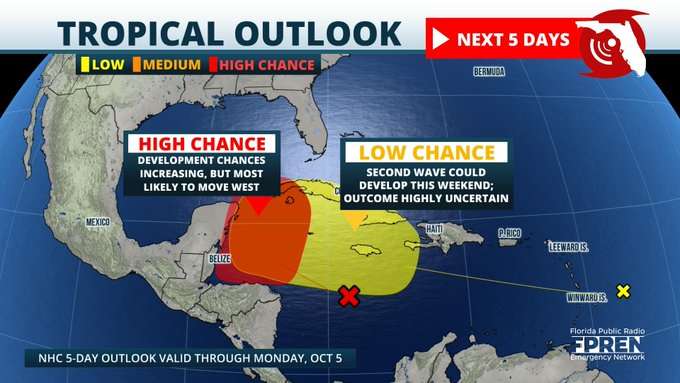 A disturbance in the Caribbean could become a tropical depression or storm near the Yucatán Peninsula by the weekend, but at the present time is not expected to be a significant threat to the Sunshine State.

The active pace of the record-breaking 2020 Atlantic Hurricane Season came to a standstill last week, giving coastal residents a brief sigh of relief. However, meteorologists anticipate that the basin could enter into another active period later this week as the final active month of the hurricane season approaches.

On Wednesday afternoon, the National Hurricane Center outlined an area of broad showers and thunderstorms over the west-central Caribbean Sea as having a moderate chance of developing into a tropical system within the next five days. The disturbance is expected to move westward and interact with a frontal system by the end of the week, which will likely enhance thunderstorm activity and organization. Environmental conditions are then forecast to be conducive for further development over the weekend, when a tropical depression could form as the system moves towards the Yucatán Peninsula.

There is a significant amount of uncertainty regarding the development of the system and a range of scenarios for its potential track. The disturbance could drift inland over the Yucatán Peninsula and southern Mexico, become near stationary in the Bay of Campeche, or drift eastward and enter into the central Gulf of Mexico which, at that time, could threaten Gulf Coast States.

There is also another scenario that weather models are hinting at where two systems form within a few days of each other instead of just one. If this scenario plays out, one of the systems could travel westward into Central America and the second system would form east towards Cuba and likely track to the north.

Tropical cyclone genesis tends to favor the Caribbean Sea and the southern Gulf of Mexico during the month of October, bringing systems very close to land. The transition from Summer to Autumn in the northern hemisphere generally introduces cooler temperatures and stronger vertical wind shear across the open Atlantic which aids in suppressing tropical cyclone development. The Atlantic is expected to remain quiet into the end of the week as a vast area of enhanced wind shear continues to be draped over the region and extend east towards the west coast of Africa. This wind shear area could lessen by the end of the weekend which could allow more tropical cyclone development in the upcoming weeks.

Twenty storms so far this season have became the earliest on record to develop in a calendar year. Nine of those tropical cyclones have directly impacted the United States, which ties the record set in 1916. The next named tropical storm for the 2020 season would be “Gamma”, the third letter in the Greek Alphabet and the second time ever to be utilized.